Ever since I was a child, I've had this passionate desire to go to the Greek island of Santorini. When I was little, a friend's parents spent their honeymoon there, and when I saw the holiday snaps it became my dream holiday destination.

However, time has flown and circumstances change. I now have a four-year-old daughter, Betsy, and when I started looking at hotels in Santorini, I realised that bringing a child along might prove tricky. From what I could see, the hotels are very much set up for couples. It's the ideal destination for a honeymoon - as my friend's parents discovered all those years ago.

So despite my best intentions, it was time to come up with a Plan B. I asked friends for their advice and they all suggested I visit Mykonos instead - and I'm so pleased they did.

I'm now its biggest fan. It's an extraordinary island - an absolute gem. Everything about Mykonos was glorious, and I would just go back in an instant because I absolutely fell in love with it.

Before the trip, I had celebrated my 40th birthday by throwing a party in London. It was great fun but pretty hectic getting things organised, so afterwards I wanted to do something more low-key.

That's where the idea of a trip to Greece came in. I travelled with Betsy, my best friend Tamara Edward and my goddaughter Elicia (just to make things a little bit more complicated, Elicia is now godmother to Betsy). I thought it would be lovely to have a girly trip.

Elicia was especially thrilled when I told her we were going to Mykonos because the Kardashians had been there the previous summer - apparently it featured prominently on their reality TV programme. Like many young girls, Elicia is a huge fan.

Heading to a Greek island was also significant for me because I've co-written a one-woman show in which I play a sort of Shirley Valentine character having a midlife crisis.

I've had a kind of Shirley Valentine obsession myself over the past three years - no, not of meeting a tall, dark, handsome fisherman, but of exploring the Greek islands.

From the moment we arrived on Mykonos, I was enchanted. The food was incredible.

I had salads and grilled halloumi, and the fresh seafood was just amazing - huge prawns and excellent sea bass.

Normally I'm very careful about what I eat, but on holiday I let myself relax a little. In Mykonos, I felt I didn't need to worry. At lunch, the restaurant served a simple tomato and cucumber salad in a delicious lemon and olive oil dressing and plenty of herbs. After eating something like that, I felt full, yet had the satisfaction of knowing I'd had something really healthy.

Betsy also loved the food. She tried halloumi for the first time and adored it.
We were staying on the 'quiet' side of Mykonos (there is a clubbing side too).

Betsy had such a good time, especially walking around the little town and wandering down to the port to look at all the posh yachts. She was so active that by the evening, she was worn out and just wanted to go to bed.

Mykonos has small yet delightful beaches - I could sit on the sand and easily keep an eye on Betsy. There weren't too many people around either, so it was all very relaxed. 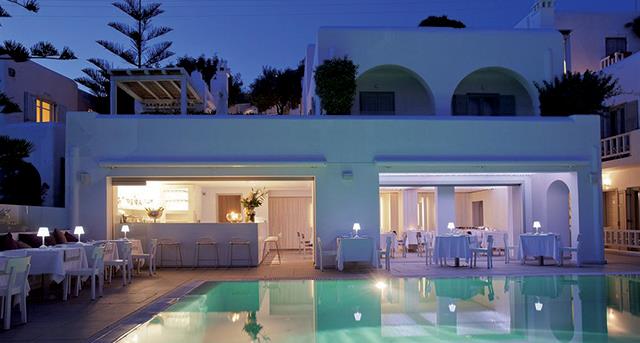 Dinner on the Grace Hotel terrace is a delight

We stayed at the impressive Grace Hotel. It's on the hills above Mykonos town, with stunning views of the sparkling Aegean. It's relatively small, with just 32 rooms, many of which have their own plunge pools.

The hotel's literature accurately said 'the overriding atmosphere is one of serenity'.

For the adults in our group, one of the hotel's great treats was its signature Grace cocktail - a delicious gin-based concoction. Every time we ordered a Grace cocktail, there was a chorus of Happy Birthday - to the point that on our last day, I had to say: 'Right, I think we've established that I'm 40 so there's no need to keep celebrating!'

We had lunch every day in the hotel but took the decision to dine out several evenings - although dinner on the Grace terrace was difficult to beat, with that amazing sea view.

Mykonos town centre was just a five-minute cab ride from the hotel, so it was simple to get to the shops - always an important consideration during a girly holiday.

I knew that after I returned from my trip, I was about to go into the West End with my one-woman show, so this was the perfect time to relax before a busy period. So home again and normal, hectic, life has begun again - at 40.