The Italian capital has plenty to thrill younger visitors, as David Dillon and his sons discover

Italians are famous for their love of children, welcoming them into restaurants and cafes as if they were part of their own brood.

We were keen on a destination that would scratch our itch for culture… but not turn its nose up at our two boys, Thomas and Jack. A short summer-time break in Rome proved the perfect match.

We based ourselves at the four-star Hotel Mascagni, a stylish boutique hotel in the Repubblica district of the Eternal City, close to all of the major attractions.

Blissfully, we had adjoining rooms - a double bed in one and twins in the other - and each room had its own bathroom, which gave everyone space.

At breakfast every morning, the staff chatted to the boys, quizzing them about their favourite football teams and encouraging them to try out their Italian on them.

With two days to cram in as much of the city as possible, we rose early with a plan to make the most of the morning before the sun got too hot.

The trouble with Rome is that there is too much to see and do and we got carried away with its irresistible charms.

We did a lot of walking on the first day, taking in the Pantheon, the Trevi Fountain and St Peter's Square and, of course, picking up quite a few ice creams along the way - which kept the boys in good spirits. 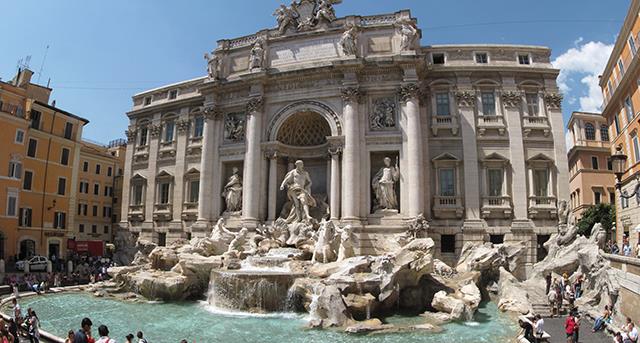 The Trevi Fountain in the heart of the city

Rome is not huge but it is hilly, and in the baking August sun little legs can tire. When we returned to the hotel in the evening I discovered that Jack had been stoically enduring the painful consequence of wearing trainers without socks, and we decided to re-think the transport options.

The next day we went everywhere by bus. You never wait long for one and it is easy to navigate your way around the city, and we got a breather and a sit-down in between sight-seeing trips.

There are plenty of other options too; sightseeing buses regularly circle the Eternal City and you can even hire Segways should you desire a more novel way to get around. 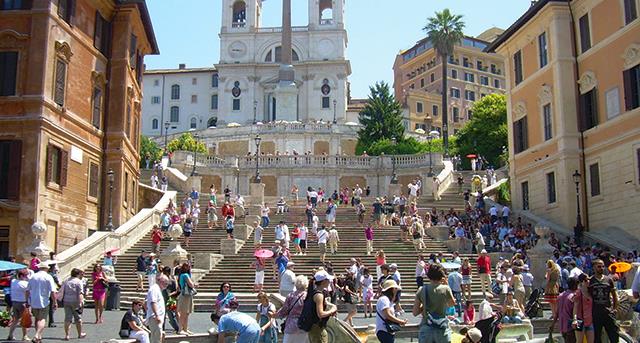 The Spanish Steps, another of Rome's great tourist attractions

High on the list of priorities for the boys was the Colosseum. They had been learning about Romans at school and wanted to visit the scene of all that gory gladiatorial combat.

Hotel staff had advised that we should book tickets in advance to avoid the queues - a tip which saved us hours of waiting in the broiling Italian sun.

The boys immediately made a beeline for the first hawker they saw dressed as a centurion, who promptly demanded 10 euro once Elizabeth had gleefully rattled off some holiday snaps.

I didn't resent it too much though; I shall treasure the memory of seeing how Thomas and Jack were awestruck by this iconic symbol of imperial Rome.

All they'd learned in the classroom about this amphitheatre from 80AD was brought to life here and kept them happy and engrossed for more than two hours of fascinating fun.

Next we took a bus to the church of Santa Maria del Popolo to see two jaw-dropping Caravaggios, which is about as much art as two small boys can take in a day.

While we could have stood and stared at the revered handiwork of this 16th century master for much longer, we quickly realised that there are only so many antiquities that you can squeeze in with children and still expect them to be cheery. 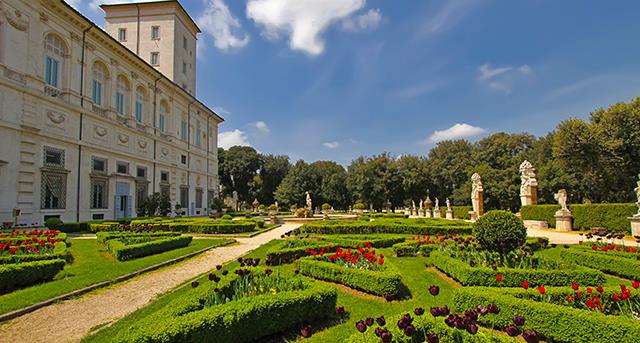 Formal gardens in the grounds of Villa Borghese

Then Elizabeth and I took a well-earned rest in the shade of a tree in the beautiful park at Villa Borghese.

Rome's answer to New York's Central Park, the third largest park in the city is loved by locals and tourists alike. The elegant 226-acre gardens are perfect for a little respite from the tourist trail and visitors can admire fountains, statues and museums galore.

We almost hired bikes - a popular way of getting around Villa Borghese's landscaped surrounds - but in the end let the boys enjoy four wheels instead.
With energy to burn they loved the idea of hiring pedal-powered go-karts.

Thomas and Jack even took a decidedly local approach to the driving and hurtled around corners at speed, enjoying being in charge of their own set of wheels.

With a little more time, we would have loved to tick off the Vatican and the Sistine Chapel too, although the long queues in unforgiving weather might have been better for an off-season visit.

It isn't easy to shop with two boys either, so we also tried to ignore the city's stylish high fashion boutiques in favour of picking up a few trinkets in the sea of tourist shops instead.

A mini-break with children can be a big ask and not many European tourist cities can pull it off. Rome does though; who can argue with a living history lesson and ice cream in flavours most kids can only dream of back home?