The superstar might be the Portuguese island's most famous export - but Carol Lewis finds the rugged scenery, lush gardens and fine food weaves its own magic

A statue on Funchal's quayside of the footballer Cristiano Ronaldo has golden boots, hands and groin, the bronze buffed by the touches of adoring fans. I take hold of his right hand and have my photo taken.

The former Manchester United and Real Madrid player is Madeira's golden boy – the island's airport is named after him and here on the quayside is the CR7 (7 is his shirt number) museum, shop, hotel and café.

You can also have your picture taken inside, where there are models and a computer simulation of the great man, now plying his trade for Juventus in Italy. There are cabinets of fan mail, signed footballs, shirts, boots, medals and trophies. There are also detailed instructions on 'how to score a free kick like Cristiano'. I'm sure it'll come in useful, even to a non-football fan such as myself.

In the museum shop I note that you can buy mini replicas of his golden boot and Ballon d'Or trophies at the knockdown price of €80 per pair. In the hotel my travelling companion Kate is astounded to find that the door handles in the lavatories are shaped like Ronaldo's hands – put your hand in his.

Despite him plainly being the most famous person to come from Madeira, this, we agree, is a step too far. 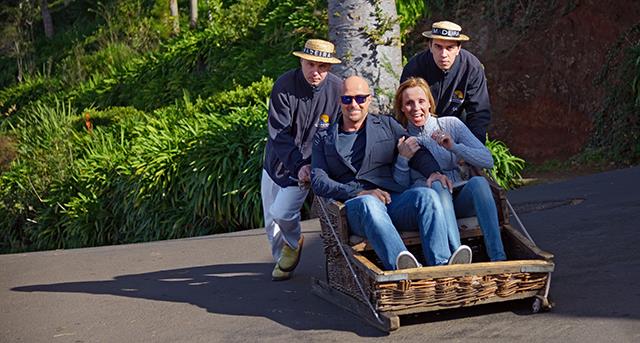 Still as popular as ever, riding in a wicker toboggan down the steep streets of Funchal

Until Ronaldo opened his museum of greatness in 2013, the most quirky tourist pastime was being pushed by men in straw hats down the steep streets of Funchal, the capital, in a wicker toboggan.

The Portuguese island, 250 miles north of the Canary Islands in the Atlantic, has been named by the Association of British Travel Agents as one of the 12 hot destinations to watch. In its Travel Trends report, it says: 'The island is increasingly gaining a reputation for adventure and activity holidays, with mountain biking, canyoning and climbing in its dramatic landscapes.' 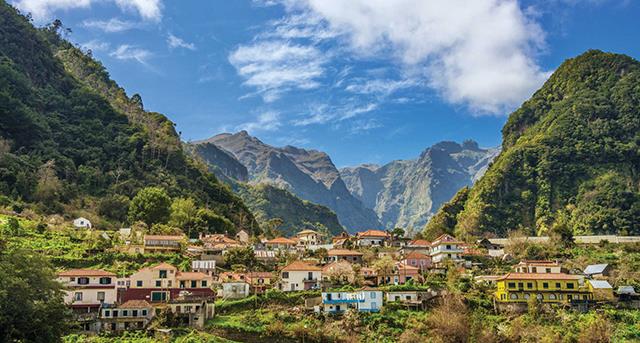 And indeed a short drive from Funchal we find ourselves surrounded by lush tropical mountains and steep-sided valleys. We decide to leave hiking along the island's irrigation canals, known as levadas, for a longer visit and opt to cover the greatest distance in the shortest time with a four-wheel-drive tour.

Our driver, David, is a talking encyclopaedia, barely drawing breath while pointing out the different types of vegetation on the steep terraced fields as he negotiates numerous tunnels and  hairpin bends.

'On the right you see bananas, our main crop. On the left sugar cane, from which we make rum. We use the rum in the traditional poncha cocktails. Oh, look at the waterfalls. Winter is the best time to see them; it's too dry in summer.'

We emerge, slightly shaken, on the north coast. Here you really appreciate the rugged beauty of this small volcanic island. Its red cliffs drop straight into the ocean, occasionally giving way to a narrow beach of black sand. We stop to admire the scenery, and in Santana we stop to admire traditional A-frame cottages, some with thatched roofs.

The skywalk, a glass viewing platform at Cabo Girao in the south, is one of the best places to appreciate the dramatic scenery. In the north, less scarily, we have lunch on the terrace of the Quinta do Furao restaurant in Santana, noted for local delicacies such as garlic limpets, beef kebabs barbecued on laurel skewers, black scabbardfish in banana sauce and sweet potato bread. While we eat we admire one of the most stunning views on the island. 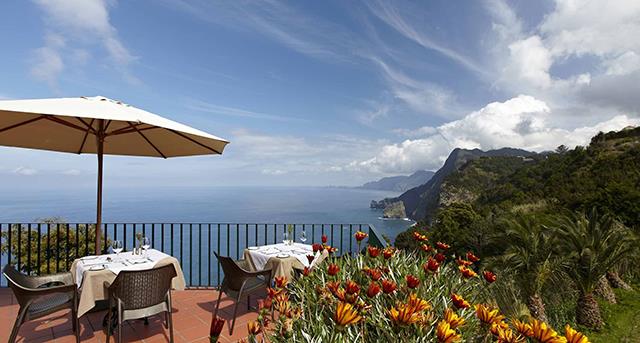 We burn off the calories with a walk in the restaurant's vineyard and lush garden, where there is a huge traditional grape press, the site of harvest celebrations in the summer.

Almost every restaurant we visit produces its own wine. The beachside restaurant of Faja dos Padres in the south is famous for its dark vintage that dates from the 15th century – and its inaccessibility. A cable car transports you down a steep cliff into its vineyard and garden. Mario Fernandes, a winemaker, claims that the soothing sound of the waves, and the classical music he plays while working, helps to improve the taste of his wine.

He tells me that Ronaldo's mother recently used the garden to film an advertisement for Madeiran bananas. 'Maybe it was these bananas that helped to make him so famous,' he says. I immediately eat one.

First published in The Times - April 2019