Pandas are notoriously elusive - you’d probably get similar odds for spotting a mountain yeti in the wild. Even in captivity, you must time your visit very carefully.

I’m told to get to Chengdu Panda Reserve early as its prized residents tend not to venture out after lunch. So when fog delays my early-morning flight for hours I don’t hold out much hope of coming face-to-face with its star attraction.

For a while all I can see is thick vegetation as I join a group of tourists peering over the barriers at one of the panda enclosures. Then a flash of black and white appears between two trees and a furry form lumbers into view.

He's joined by two of his playmates and the trio ambles sleepily towards us, one behind the other.

We hear shouts from the far end of the enclosure and the pandas prick up their ears, breaking into a trot as they cross the bamboo platform in the direction of the cries.

Another five pandas emerge from their concrete shelter and head for the pile of fresh bamboo that has been thrown by park staff on a spot carefully chosen to give us all a perfect view.

There's a chorus of ‘oohs’ and ‘aahs’ as smartphones and cameras are aimed.

The bad weather may have delayed my flight from Jiuzhai Huanglong, in the north of Sichuan Province, but it's also kept the pandas cooped up and now they’re making the most of the break in the rain. 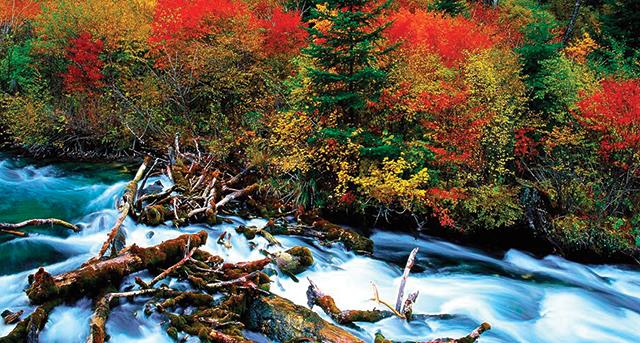 A riot of colour in the heavily wooded national park

Chengdu Panda Reserve isn’t China’s biggest such centre (Wolong Nature Reserve is a massive 200,000 hectares) but it does boast the largest captive-born giant panda population in the world, thanks to a successful breeding programme.

Remarkably, techniques to give nature a helping hand include showing the animals videos of other pandas mating - and apparently Viagra is dished out too.

When that fails, researchers turn to artificial insemination and the hi-tech incubators in the Sunshine Nursery House ensure that even the most vulnerable cubs survive.

There are just 1,500 giant pandas left in the wild, a handful of which live in the mountains of Jiuzhaigou National Park, in the province's far north.
It's a major tourist attraction, drawing more than two million visitors a year.

When I arrive at 8am, crowds are spilling out of coaches and queues snake down the hillside.

This 72,000-hectares of forest, lakes and waterfalls in the Min Shan mountains was 'discovered' by the Chinese only in the Sixties. Its preservation is guaranteed thanks to UNESCO World Heritage status.

With my guide, Irish ex-pat Kieran Fitzgerald, we strike out along wooden boardwalks and eventually get ahead of the crowds, pausing in the sunshine at the Nuorilang waterfall. 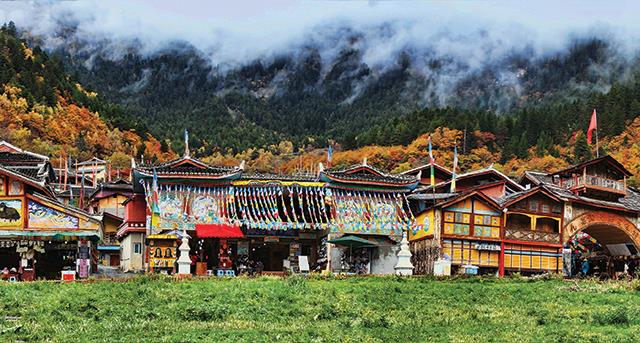 The village of Shuzheng in Nine Village Valley

Jiuzhaigou is Chinese for ‘Nine Village Valley’, which refers to the nine Tibetan villages scattered throughout this region. The main villages sell handicrafts and souvenirs.

After lunch, Kieran takes me on a hike in nearby Zharu Valley. We pass rows of colourful prayer flags, an abandoned Tibetan village and the odd docile yak.

There is a wide choice of hotels in the region - including Zhou Ma’s Tibetan homestay. Billed as the ‘only authentic Tibetan homestay’ in the Shang Si Zhai Valley, it offers three basic but comfortable bedrooms, at around £20 per person per night.

Zhou Ma is the perfect hostess while her mother Amma serves breakfast, lunch and dinner.

The family also owns the excellent A Bu Lu Zi restaurant near the park entrance and you can book Tibetan cooking classes with chef Ke Zhu, Zhou Ma’s brother.

I re-join the crowds at Huanglong National Park, a three-hour drive from Juizhai Valley. This second UNESCO World Heritage Site boasts equally impressive natural beauty; its travertine (a form of stone) bank is said to resemble a huge golden dragon sweeping through the valley.

Here too, the route follows miles of boardwalk and takes around four hours, peaking at 3,580 metres.

As the gradient steepens I become short of breath and seek refuge in an oxygen hut. For a small fee, I can lean back on a large cushion full of oxygen and breathe in its restorative powers through a thin plastic pipe. 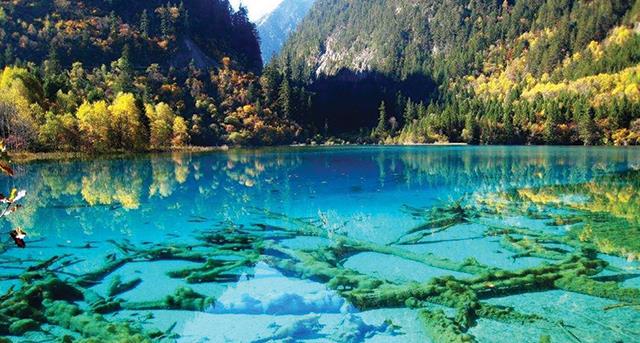 Rejuvenated I continue up to the Five-Coloured Pool where I’m rewarded for my efforts; here the beautiful travertine pools are scattered in front of me like giant frilled pieces of jade, stretching down to Huanglong Temple in the distance.

The next day Kieran takes me to Zhi Ma Tibetan eco-tourism village, a remote Tibetan settlement two hour’s drive from Jiuzhai Valley.
After being welcomed with a cup of yak butter tea by villagers, we stroll to the monastery, passing the old village and mountainside barley crops.

The monks greet us warmly as they turn the prayer wheels. ‘Tell people about us’, one monk urges me, ‘tell them to come here.’