Pangkor Laut my island of dreams

It was Pavarotti's paradise and Joan Collins's honeymoon haven - but you don't have to be a celebrity to be a VIP on Pangkor Laut, as Helen Moss discovered

When Pavarotti first went to Pangkor Laut, he arrived with 26 suitcases – 20 for his clothes and six for his food. He then declared it the most beautiful place he’d ever seen. 'It's enchanting, it's a paradise,’ he gushed. ‘I almost cried to see what beautiful things God had done.’

But I don't know what the Italian opera star was doing with all those clothes.

If he were alive today, he’d need only one case for shorts and T-shirts - and definitely no nibbles. Pangkor Laut Resort, set on its own little island, now has six high-end restaurants, all open to the balmy sea air.

This tropical haven of beaches, rainforest and five-star pampering three miles off the west coast of Malaysia has also been a favourite of Michael Schumacher, Eric Cantona, Tony Blair and British actress Ruth Wilson (from the TV thriller The Affair). Bond girl Michelle Yeoh (Wai Lin in Tomorrow Never Dies) is a regular. And Joan Collins took her fifth and current husband, Percy Gibson, there on honeymoon. 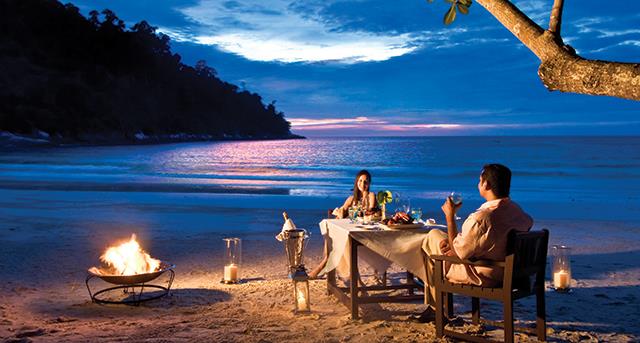 A romantic dinner on the beach at Pangkor Laut Resort

However, you don’t need to be a celebrity to experience Pangkor Laut Resort's many delights.

From the airport at Malaysia's capital of Kuala Lumpur, Pangor Laut Resort can arrange for a car to take you to Marina Island Pangkor - the jetty near Teluk Batik from where boats to the island depart.

Even the transfer is a great sightseeing experience,  with palm plantations, which have mostly replaced traditional rubber ones, as well as countless villages and their residents.

The 300-acre island is a short boat ride away - the first glimpse of it is little wooden villas perched on stilts above the ocean. These are individual luxury air-conditioned villas, connected by wooden walkways to the main resort, nestled between the beaches and gentle hills of the island’s north coast.

Below and all around you in your stilt villa is azure ocean; above is sun and sky. Each villa has a deck with sun loungers. Just five minutes of lying back - waves lapping beneath and the calls of tropical birds carried across by sea breezes - will melt your stresses into the sea.

If you're lucky, from your deck you might see eagles, hornbills, sea otters, turtles and other wildlife.

On a wildlife tour with resident expert Aris, expect to see fruit bats, monkeys (long-tailed macaques, which are very cheeky), wild boar, two types of snake - both non-lethal to humans - and very rare pangolins. These look a bit like anteaters and have been hunted to near-extinction by the Chinese and Vietnamese, who deep-fry the skin and eat it as crackers. Pangkor Laut Resort is working to start a pangolin breeding programme - one of its many eco-projects. 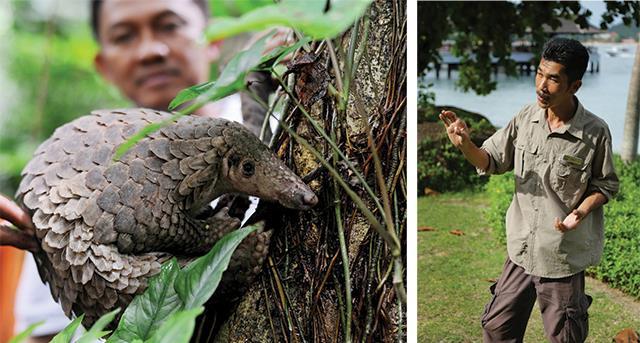 During my trek I was lucky enough to see a tiny paradise tree snake, a huge two-metre dragon-like monitor lizard and hollow crickets (known as skeleton cicadas).

Treatments at the spa include one for men, the Bukit Gantang Warrior Treatment. It's far more relaxing than it sounds, and promises vitality, structural alignment and flexibility.

I had the two-and-a-half hour Campur Campur signature treatment, which began at the Bath House, where my feet were washed and the soles tapped with a wooden hammer. Then I was dressed in a sarong and guided through cold and hot pools and a Japanese washing hut before having my first massage, which also involved water, and was very refreshing.

The main massage, which lasted 105 minutes and took place in a dry spa room, was out of this world - the best I've ever had.

My masseuse, Putri, said the technique was unique to Pangkor Laut and that she and her colleagues had undergone special training. I thought I was very relaxed before I went in, but afterwards I was on a never-experienced-before level of chilled-out-ness.

The resort is a glorious feast for the senses – and a chance to be utterly pampered. No wonder Pavarotti sang its praises.