The misty mysteries of beautiful Burma

Shimmering temples, ghost cities – and high end restaurants. Now is the time to visit a once closed country that is catching up with the modern world, says Tamara Cohen

It’s twilight at the Shwedagon pagoda, a 300-ft tower of shimmering gold.
Amid a sea of candles, burning incense and kneeling worshippers, a monk has retrieved his mobile phone from the folds of his maroon robes and is posing for a selfie.

The most impressive Buddhist site in South East Asia still looms over the low skyline of Yangon, but everywhere a closed society is colliding with the modern world. 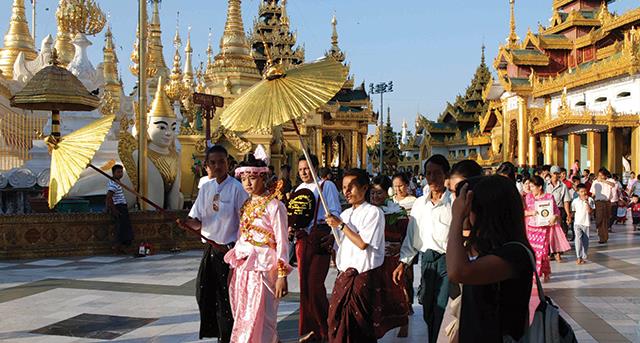 A ceremonial procession at the Shwedagon Pagoda

The Shwedagon pagoda, in Yangon, is one of the most impressive Buddhist sites in South East Asia.

Since the lifting of international sanctions three years ago, change has come to the city.

This was Burma’s capital until 2005, when military rulers decided on a whim to build a new one 200 miles away. Now, hotels, shops and high-end restaurants are springing up among the crumbling apartment blocks and spice-laden roadside markets.

Cars, phones and other luxuries once preserved for a rich elite are trickling down, and there’s cautious optimism.

Before it was plunged into half a century of isolation, Rangoon, as it was then, was a trading centre of the British Empire. The colonial past lingers on downtown.

Along wide Victorian avenues are the stucco-fronted Telegraph office, Port Authority, old Secretariat and offices of long-defunct companies, in slow decay with foliage poking out of some upstairs windows.

The Strand Hotel, built in 1901, is one of the few restored to former glory and is an atmospheric stop for a drink, with wood panels and twinkling chandeliers.

Swathes of the country, renamed Myanmar in 1989, still feel barely touched by the 21st century.

We follow a typical route for foreigners, taking in the misty plains of Bagan packed with ancient temples, to the floating villages of Inle Lake, trekking in the hills of Kalaw and exploring the last royal city of Mandalay.

Bagan is a ghost city, built between 1057 and 1287 as the capital of a once prosperous dynasty, before their reign was abruptly ended by invading Mongols.

About 2,000 temples still stand, in an archaeological wonder to rival Angkor Wat in Cambodia - but with a fraction of the visitors. They range from tiny red brick cabins, to palace-sized shrines painted with intricate wall murals, 30-foot gold Buddhas and whole souvenir markets inside.

One of the grandest was put up by a 12th century king to atone for executing his father, brother and wife.

We had a hot air balloon at dawn over Bagan, and were treated with unforgettable views drifting across the stunning landscape, eerily quiet except for farmers herding cattle far below.

Our guide took us to businesses locals will benefit from, one of them the Be Kind to Animals restaurant in Old Bagan. The vegetarian owner serves delicious tamarind leaf curry to a full house at lunchtimes.

Our arrival in Mandalay, the capital of the last Burmese kings, is by boat down the Irrawaddy River. Then the artery for armies of timber traders and merchants, today we sail along almost alone. 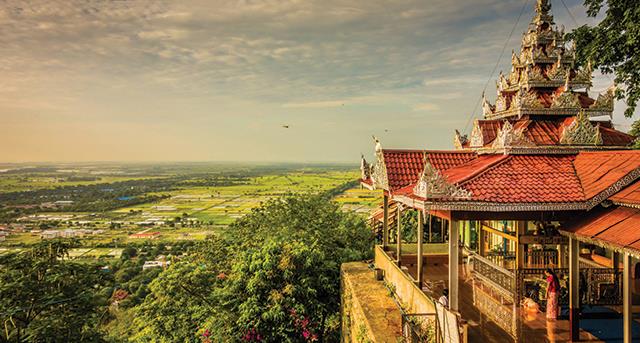 The jaw-dropping view from Mandalay Hill

From the top of Mandalay Hill, a beautiful temple with  views for miles around, novice monks practise English by asking about the fortunes of Manchester United and Chelsea.

From there, we head north to Kalaw, a former British hill station where officials enjoyed some cool air in the baking summer.

Surrounded by misty mountaintops, it is a haven for trekkers passing through the mountain villages and remote monasteries.

Quiet at night, like most of Burma, it sprang to life on our first evening for the full moon, with fireworks flung in all directions, troupes in traditional costumes processing through town with blazing lanterns, and a huge sound system struggling behind by horse drawn cart. 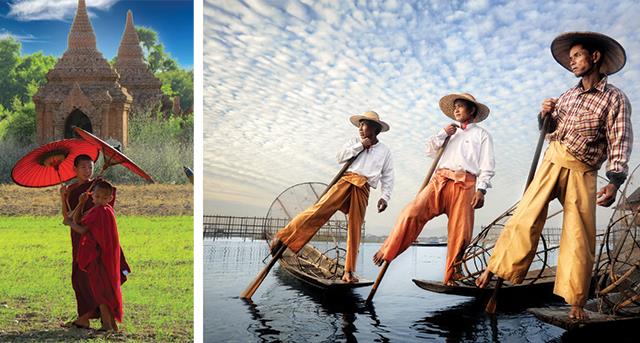 Fishermen with their cone shaped nets on Lake Inle

Our final stop is Inle Lake, a four by ten mile expanse of water heaving with life. Around a number of bustling villages on stilts, children paddle to school, farmers tend floating tomato crops and fishing boats glide among them.

Travelling by longboat through the fray, we pass restaurants, yet more gold-topped temples, and workshops full of silk weavers, umbrella makers and silversmiths.

Ten years ago there were just a few guesthouses along its banks. Now there are dozens in the main town of Nyaung Shwe, where the beginnings of a backpacker vibe are emerging.

Tourism has brought much needed jobs but many fear reform may stall for Burma, sandwiched between powerful China and India, trapped between the iron grip of the old government and tantalising new freedoms on the horizon.
We chew over the possibilities with a retired civil servant at a monastery back in Yangon.

Despite the advent of more employment and a rise in living standards, he is concerned that the younger generation, many still poorly educated, should share in the benefits.

‘The change is good, but we must make sure it helps our people’, he said. ‘We must make our own way this time.’