Based on 8959 reviews on Trustpilot

What 3982 DialAFlight clients thought of Africa

The guy who helped us, was amazing.

Over the years we have had excellent service from Oliver and the team at DialAFlight. Cannot recommend them highly enough.

Leah and Aidan. Thank you for the amazing service and for professional touch. Much appreciated

Thank you for being brilliant

A little more help with the VeriFLY app would be great

Oli and your team, you are doing a good job. Keep it up. I have told my friends you are the best for travel

Quick action when flights were cancelled.

Everything was excellent - I will strongly recommend

DialAFlight customer service exceeded expectations. I will definitely book with you again and recommend to others

Danny was incredibly helpful. Thanks so much for the communication and rescheduling. Flights painless

Sarah is an absolute star and so proactive and helpful with all my flight plans that have been complicated over the last year. There is also always someone available to help if she is not around. Great service, thank you

Shelley and colleagues always pro-active when COVID threatened to derail holiday. Fortunately all worked out well in the end!

You played your part very, very well and will definitely recommend friends to you

Matthew and his team kept me updated throughout a particularly challenging journey. It took 8 amendments to my flight due to BA cancellations.

In times of Covid you guys have been excellent. Thank you.

I having been using DialAFlight for 18 years and have never been able to fault. Always offer above and beyond service and go out of their way. Connie was exceptional during Covid. Highly, highly recommend.

I always revert back to DialAflight because you give me a wide range of options.

The team were professional and extremely helpful, especially when the airline cancelled our flights whilst we were abroad. Thanks especially to Harrison and Graham.

Guy and Ross are my gurus and are absolutely lovely. They have worked hard trying to sort out flights and travel requirements and been with me all the way.

From the moment that I phoned Callum pre covid to book flights to visit family until now the service has been simply outstanding. The disruption that we had with two trips that had to be cancelled due to restrictions Callum always kept us informed about our options and he went the extra mile to help us. Our flights got cancelled 4 days before. Callum managed to find us new flights and made our trip to visit family for first time in 6 years possible. I can’t praise and thank you enough.

Excellent customer service taking our needs into consideration and providing advice and guidance along the way including a designated contact. As always, well done and we are very happy customers who will continue using the services of DialAflight. Thank you Bradley and team.

It makes travelling so much easier booking with DialAFlight and I appreciate them keeping us up to date.

Many thanks to Darryl and team for getting us back as quickly as possible under the trying circumstances. The paperwork and bureaucracy that has to be followed to the letter is anything but fun. That's why I wish to thank DialAFlight for keeping in touch with me, for answering my many questions and for their willingness to solve whatever problem arose. I was very impressed and grateful for their help and support.

Impressed that handover from one person to another was very smooth

I was so impressed when I got a message advising where we had visited had been added to the red list. They were very helpful and were available 24/7. You have gained a happy customer. Your customer service is the best..

To ride the Blue Train between Pretoria and Cape Town is to travel along part of Britain's imperial history; a journey that is at once luxurious, breathtakingly beautiful and thought-provoking.

The railway heading north from the Cape was part of Cecil Rhodes's grand colonial vision: the 19th-century mining magnate, today the focus of intense political controversy, imagined a trans-port network from one end of Africa to the other to enable British trade and political dominion. It didn't happen but this remarkable train is part of his legacy. 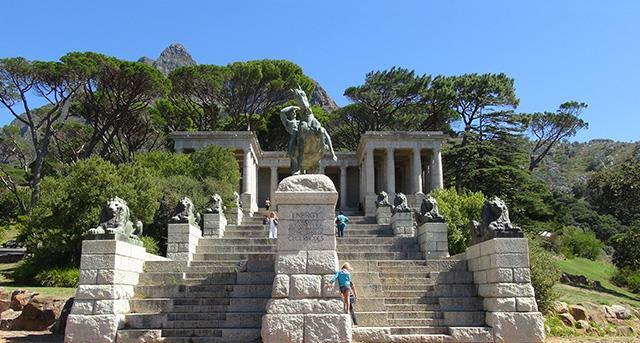 After a night in Fairlawns in Johannesburg, a chic boutique hotel and spa set inside a former country estate, my companion and I head to Pretoria station and enter an older, genteel world, with a nostalgic colonial twist.

We board the bright blue train, with some 80 other passengers, and enter a world of wood-panelled comfort, with brass fittings, crisp linen and low golden lighting. The Blue Train is the Orient Express of Africa.

Once offering an overnight journey to the Cape, the Blue Train is now a deliberately slower experience, taking two nights for the 997-mile trip.

Our charming butler, Angela, has brought a bottle of South African spark-ling wine. The compartments are roomy, about 8m2, each with an Italian marble bathroom.

The train feels venerable and experi-enced, adding to the feeling one is riding a bit of history. I couldn't be happier.

A cocooned quiet pervades the cabin, just a faint rumble of the tracks audible through the wide picture window - double-glazed for tranquillity.

It's time to dress for dinner; dress code is 'elegant' for ladies and jacket and tie for gentlemen. I've opted for the linen suit with leather waistcoat, as worn by Robert Redford in Out of Africa.

The dining car is a vision in starched white tablecloths and heavy cutlery. Our waiter, Collen, has a deep sonorous delivery and virtually sings the menu. The food is delicious - seared scallops, cured salmon, duck breast, South African cheeses. The list of South African wines is positively tidal.

Collen is explaining that he once met the Queen. For a glorious moment I think he may be referring to Queen Victoria. 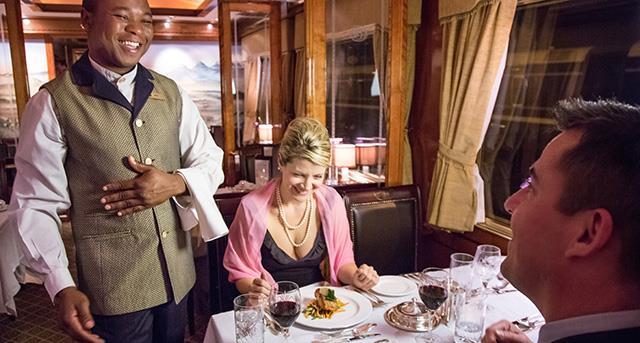 Onboard service from a charming Blue Train butler

We totter back down the corridor, the sway only partly induced by the train's movement. You can sense the vastness outside; not a single light is visible, save a flutter of stars.

In the 1920s, steam locomotives plied the line between Cape Town and Johannesburg. After the war, the Blue Train service was launched, named after the blue steel trains introduced a few years earlier.

Rhodes died in 1902, but countless colonists still took this route north for the diamond and gold fields. Rhodes even had his own private carriage; his body was transported along this very line, stopping at every station for mourners to pay their respects.

In the morning, a blinding African sun slices through the blinds, which lift to reveal the plains stretching into the distance. We eat eggs benedict and fresh fruit and watch herds of tiny antelope flickering through the scrub.

Watching Africa glide past at a stately 30mph is mesmerising. 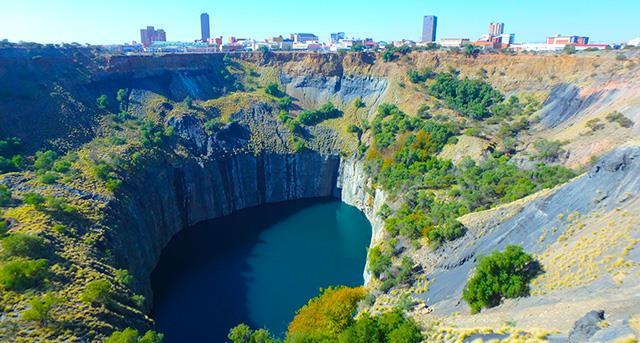 At mid-morning we pull into Kimberley, where diamonds were discovered on the farm belonging to the De Beer brothers in 1871, prompting the greatest diamond rush the world has seen. Here, until 1914, some 50,000 miners using picks and shovels extracted 6,000lb of diamonds.

We are driven to The Big Hole museum - exactly what the name indicates, a pit 460m wide and 240m deep, the largest hand-dug hole in the world, a testament to human ingenuity and man's hunger for gems. Now it's a ghostly place.

At Kimberley station, the station-master hands out South African sherry in tiny glasses engraved with the Blue Train logo.

The train sets off into the Great Karoo desert, the vast plateau the size of Germany whose name comes from a Khoi tribal word meaning 'land of great thirst'.

I sit in the observation car at the rear, watching the vast bushveld drift by, an undulating tableau of rock, semi-desert and sparse scrub. High tea is served in the lounge car, with cake and scones; another extravaganza is staged in the dining car in the evening, to the accompaniment of Collen's echoing baritone.

We awake descending towards the Cape, with vineyards stretching away under high granite outcrops, as our journey on this historical artefact rolls to a close. And our holiday is rounded off in wine country, with a few days in Majeka House, a delightful boutique hotel just outside Stellenbosch.