Based on 10039 reviews on Trustpilot

What 4026 DialAFlight clients thought of Africa

As always, thanks to Raj and the team. I continue to recommend DialAFlight to friends and family - there’s at least 50 people using DialAFlight as a result!

Roger was fantastic - professional, friendly, efficient. He even called us a couple of days before we were due to fly to confirm that the flights were on schedule and we were good to go.

Many thanks for honouring the flight voucher from Kenyan from 2020 - the flights were (almost) all on time!

Keep up the good service

So much easier than trying to book online oneself. Telephone response is always immediate. I will look no further than DialAFlight for future trips abroad. Particular thanks to Harrison.

Well done, your service is excellent. You keep us informed about the process and the journey. Price good.

I flew as an assisted passenger and all arrangements were spot on! When we phoned to ask a question we were assisted most professionally.

Informative and knowledgeable with a personal touch. Helpful and always responded to emailed queries within an hour or so

Dan did an excellent job as always!

Conrad and his team really go the extra mile and really reduce the stress of travelling. They also care about us passengers! Can't say that very often in this day and age.

Everything went smoothly apart from the flight home. It was delayed 4 hours and because we had no signal out in the bush we were unaware. We couldn’t check in and so had to sit several rows apart.

I’ve used DialAFlight on many occasions and always found them very helpful.

Thank you very much

Everything was excellent as always and thank you to Teddy for looking after me so well.

I always book with Oli directly and he is always helpful. On my recent trip my flight was delayed which meant that I missed my connecting flight. Oli contacted me to check that I was OK.

I have already recommended you to my friends and family.

Excellent service as usual. Thanks so much. you take all the hassle out of booking a flight. Also it is no more expensive than having all the stress of doing it yourself. Will be in touch very soon

Monika is excellent. Will definitely use her services again.

DialAFlight have been there for us each journey. Much appreciated!

I've been using DialAFlight for over 3 years. I speak to a real person within a few rings EVERY time I call. They really do get me the best deals and I usually travel to South Africa. I tell everyone I meet about how fabulous they are - I cannot rave enough about their service. Love 'em!

I would not hesitate to recommend DialAFlight to friends - they have organised several long-haul trips for us including this safari which was AMAZING - we loved it.

Flights perfect but airports a shambles. Warn customers they may have very long waits for security and luggage. Our luggage got left at Schiphol but we should receive it within the next 48 hours! Your service was excellent.

Brilliant service with a smile and very, very helpful Monica Jain who understands the needs of her clients.

Shelley was a great support throughout the whole process, despite the covid delays. She kept us informed at all times.

There are some essential secrets to making the most of this vibrant and full-on ancient city, as Denys Blakeway found

Our guide was enthusiastic to show us Marrakech's historic sites.
At first, he did so, starting with a visit to the glorious Ali Ben Youssef Madrasa, known for its Islamic art of calligraphy and decoration. But soon, all pretence at sightseeing was cast aside as he led his  clients from one friend's shop to another's.

EMBRACING THE BUZZ
This was our first lesson for enjoying Marrakech. It is a maelstrom of market forces and everyone wants a piece of the tourist action. That's what gives it a vitality like nowhere else on earth - and the trick is to embrace all this hustle and bustle and enjoy the experience.

Scooters buzz pedestrians, pedestrians shout back; the muezzin calls the faithful to prayer; street food vendors press their offerings on the hungry.

From all directions, crowds funnel into the passageways of the souks, selling every sort of trinket, carpet, basket, clothes, leather work, spices and metalwork as their shopkeepers stand by, ever vigilant for a new customer. Westfield it isn't. 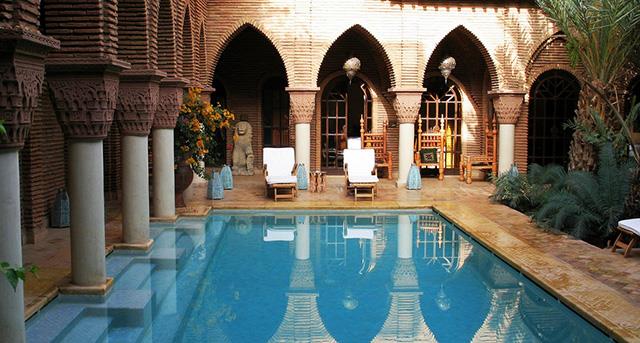 Escape the hustle and bustle and relax at La Sultana Marrakech

A PLACE TO RELAX
And here is the second lesson. You need a lovely hotel as a relaxing retreat from the excitement of the city. Ours was initially not easy to find. On arrival, we drove through the rose-red city walls and slowed to a crawl. We were in the medina – the heart of old Marrakech.

Where was our hotel? Suddenly, out of the hubbub, a khaki-uniformed doorman appeared and ushered us down a narrow passageway, though a carved wooden door and into the cool of La Sultana Marrakech.

Only three-and-a-half hours earlier, we'd been in London. Now, we were enjoying a welcoming glass of almond milk on the hotel's roof garden, looking out in one direction to the peaks of the Atlas Mountains and in another to the minarets of the old city.

Below us were the 17th century tombs of the city's one-time ruling family and, on a nearby telegraph pole, a couple of storks nested in the sun.

Soon, we left the tranquillity of the hotel to attempt some bartering in the souk. 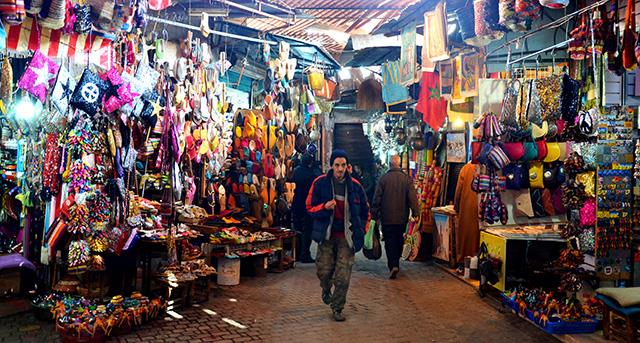 The maze of shops and stalls is exciting and bewildering

LEARNING TO BARTER
Despite my wife's best efforts, we never really picked up the art of bargaining. We found it a tricky sport. Instead, we went to a fixed-price supermarket and emerged with an assortment of slippers, lamps, baskets and plates.

Then we headed for Jemaa el-Fnaa, the largest square in Africa and certainly one of the most extraordinary public spaces in the world.

By the end of the weekend, we had seen most of the sights Marrakech has to offer, including Yves St Laurent's Majorelle Garden, which houses an enormous collection of cacti. 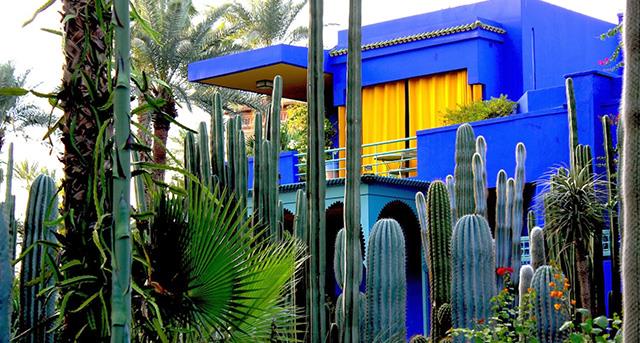 MIXING OLD AND NEW
So we decided to take a last look at the city with a horse and carriage. Our hotel doorman explained to the driver that we wanted a one-hour tour, combining something of the old city with a glimpse of the new.

This provided an opportunity for a third lesson. Instructions to the driver of a horse and carriage in Marrakech need to be extremely specific. An hour after we'd left the hotel he was keen to drop us at the already visited Majorelle Garden, where he stopped his barouche.

After we persuaded him to drive on our one-hour tour became two hours, as we meandered through the suburbs and even took in the city's ring road. But as least we saw more of Marrakech than we had bargained for!
We knew by now that the required mantra in Marrakech is 'go with it'. And have fun while you're doing it.

In La Sultana the mood was wonderfully relaxed - and it seemed the right time to join a cookery class. 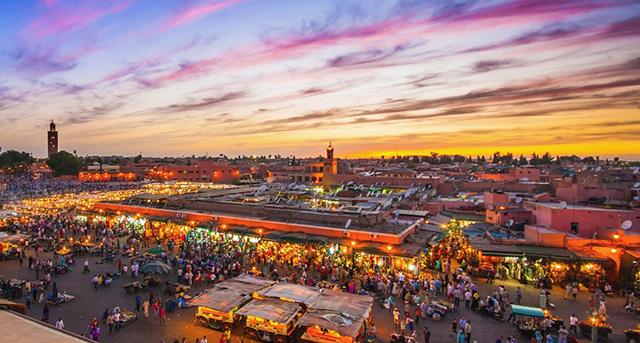 COOKING LIKE A LOCAL
We were taught how to make the Moroccan speciality, tagine - a slow-cooked stew featuring spices, nuts and dried fruits. It takes its name from the earthenware pot in which it's cooked.
We thoroughly learned the lesson that Marrakech is so gloriously in your face that the perfect plan is to revel in the chaos - and stay somewhere that's perfect to simply switch off.