Italy's second city is not best known for understatement. As the country's economic hub and the world's fashion capital, it has much to brag about, and isn't shy about doing so. On one subject, however, it's strangely reticent. The city possesses art treasures as magnificent as any in Rome or Florence, many unsurpassed in their power to take the breath away.

It's also the place where one comes closest to the greatest genius of the Renaissance or any other age - Leonardo da Vinci. Milan is where you crack the real da Vinci code. Yet tourism plays only a minor role in Milan's economy, which is what makes it so very relaxing to visit as a tourist.

After queueing at the Vatican or the Uffizi in Florence, Milan's underused galleries and museums feel like a rest cure. It's not unusual to be alone in a roomful of stunning paintings and feel Raphael, Bellini and Caravaggio all competing for your attention.

Originally the Roman Empire's western capital, Milan was subsumed into the Holy Roman Empire, then invaded and occupied in turn by Spain, Austria and France. Napoleon crowned himself king of Italy here in 1805. 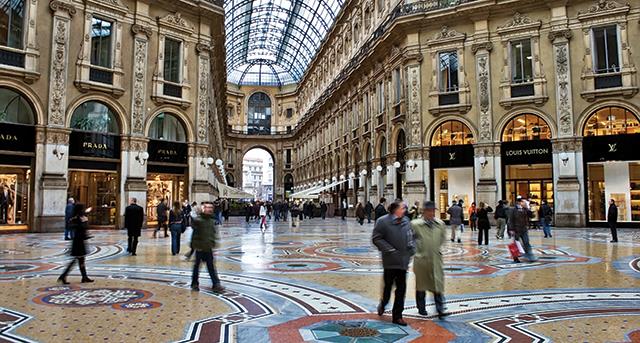 For centuries, Milan was a hugely prosperous inland port, standing on a network of canals that linked it with the Adriatic and Lake Maggiore. They were only filled in when the populace decided they'd prefer an urban tram system.

It is a city of palaces, like Venice, and colonnades, like Bologna. However, these days the ground floors of these palaces are often designer boutiques. And the colonnades exemplify the general plainness of Milanese architecture with their undecorated ceilings and pillars.

The one exception is the city's cathedral, the Duomo, a Gothic-baroque fantasy of Candoglia marble. It took over 500 years to build and is adorned by 135 spires and more than 2,000 statues.

I'm here in the care of Art Tours, founded by former guide James McDonaugh, which specialises in private, out-of-hours visits to galleries. James, 34, is leading our group personally and gets us access to Castello Sforzesco, a former stronghold of Francesco Sforza, the 15th Century Duke of Milan who was da Vinci's employer years before he painted the Mona Lisa. 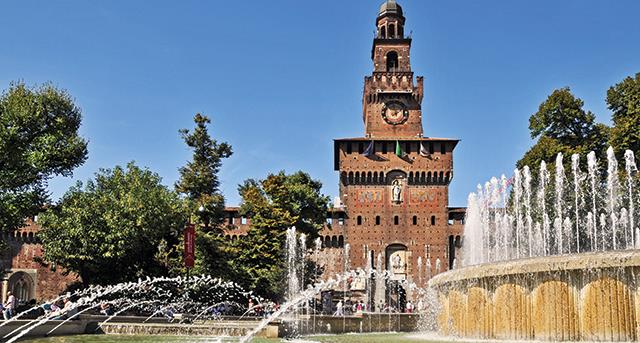 On the way, Anthony tells us about the CV which that ultimate Renaissance Man sent to the Duke in hopes of getting the gig; da Vinci doesn't even mention he's a painter, focusing instead on his engineering skills.

Thanks to our pass, we're allowed to roam the Castello after closing time, peering at the Rondanini Pieta, Michelangelo's final sculpture. We're then taken to the Sala delle Asse, a room painted by Leonardo in 1498. His unfinished design of trompe l'oeil mulberry trees, later covered by 13 layers of ordinary household paint, has been under restoration for many years and will be for many more to come.

I later head out on my own to the nearby fashion district, the Quadrilatero d'Oro or Golden Quadrilateral around Via della Spiga and Via Monte Napoleon. The menswear stores leave me utterly confused as to what constitutes cutting-edge fashion. In one window, there's a jewelled leather codpiece. In the next, a grey woollen jumper identical to those I used to wear to school in the 1950s.

It's a magnet for the city's beautiful people and in its central rotunda is the modest facade of the first-ever Prada store, established in 1913. Back then, the ultimate celebrity label was more mundanely called Fratellli Prada (Prada Brothers) and dealt only in 'valigeria' - luggage.

Our final evening is devoted to perhaps the greatest, certainly the most troubled, of all Leonardo's masterpieces. At the former convent of Santa Maria Delle Grazie, we're given a private viewing of The Last Supper. 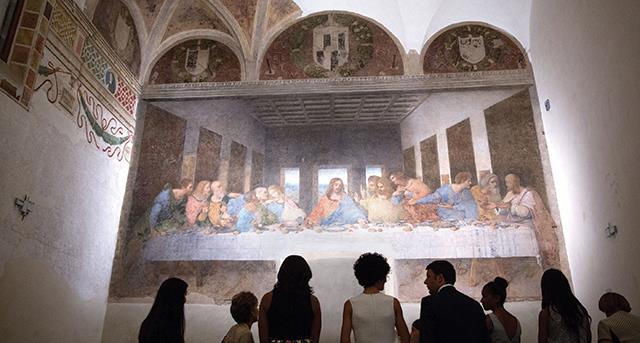 A private viewing of Leonardo's masterpiece The Last Supper

From the moment it was completed in 1498, the paint Leonardo had used began to lose its colour.The room served as a refectory for the convent's Dominican nuns and in the 17th Century, a rectangle was cut in the bottom of the painting to make a door through to the kitchen.

Two hundred years later, Napoleon's men amused themselves by throwing stones at the painting or else gouging out the eyes of the apostles with their sabres.

Dan Brown's novel the Da Vinci Code starts from the premise that Jesus secretly fathered a child with Mary Magdalene. Brown's readers are always asking my guide whether Mary is 'the blonde' in The Last Supper.

After the five centuries of vandalism and neglect Leonardo's sublime vision has suffered, that somehow seems the worst insult of all.