Don’t normally do feedback but on this occasion have no choice as Fergus was brillant. (Emergency flight due to family member illness). DEFINITELY use your services again .

Thank you for an enjoyable journey, see you again in January

Our thanks to Russell for his constant help and support. He is one in a million and will go an extra mile giving us his advice.

Absolutely fantastic trip to Brazil! Thank you Glen for all your help in arranging. The hotel you booked was brilliant. See you again for my next trip!

Trip was great and we had no issues - everything worked as planned on the flights we booked with you.

All great thank you

Kieran managed my booking and he is an example of how to do customer service! Incredibly helpful, quick to respond and genuinely interested in trying to help. My trip was not without it's hiccups and Kieran was reassuring when running through the various options. 10/10 and would recommend.

Always a good experience booking through DialAFlight. Great customer service and good recommendations for flights. Pleasingly low prices too. I love the fact I can ring for help/advice if I have any queries.

Harry couldn’t have been more helpful - he kept us updated on any changes and provided us with advice on other aspects of our destination. We always recommend you to family and friends.

Great help and assistance from Marshall

The agents were very helpful with excellent service

Thanks Darryll for your help.

I have used Tristan for years now. Always a professionalservice and very attentive. Highly recommend to my friends too. Well done.

Really happy with the service. Fergus was very helpful throughout!

A complete personal service. I cannot recommend more fully the service given by Niall of DialAFlight.

Just to let you know that our trip to Chile went as smoothly as possible, despite all the onerous covid documentation that had to be completed. Many thanks for your kindness and consideration.

These were the three words that sprang to mind when I touched down on the Galapagos islands after a flight from the Ecuadorian capital Quito. But on stepping out on to the scorched terrain, far from being desolate, I quickly found a myriad of wildlife waiting to greet me.

Dozens of crabs scuttled out from the rocks, giant pelicans swooped in all different directions, giant tortoises traversed the undulating greenery, while sea iguanas sat basking under the equator-fired sun.

I'd been in the Galapagos - some 600 miles from the mainland - less than an hour but it was long enough to see why Charles Darwin described the archipelago as being 'a little world within itself'. Never before have I witnessed such an abundance of wildlife. 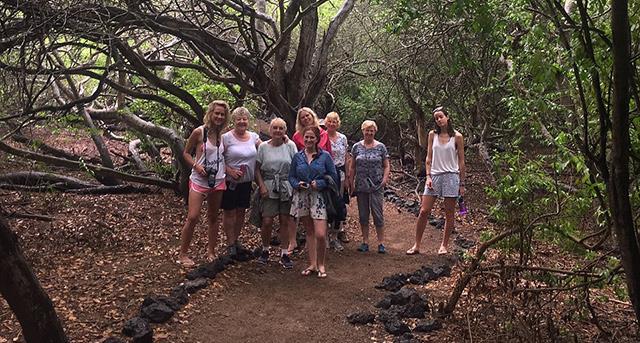 Sadie explores the islands as part of a small group tour

I had joined nine other people on an excursion endorsed by famed naturalist Jane Goodall.

Some were drawn to the region after watching David Attenborough's series, while I had developed a fascination with the islands after receiving numerous recommendations from explorer-minded friends.

A LESSON IN HISTORY

Throughout our nine-day trip - which would take us to three of the 18 major islands - we were accompanied by naturalist Alex Arregui, who grew up on the islands.

He revealed how much the islands had changed and how the area had become easier to navigate, with speedier boat services connecting the islands.

Catering to this influx there is Wi-Fi across many of the islands, allowing visitors to Instagram to their heart's content, and there is even a sushi restaurant on the busy island of Santa Cruz, inhabited by 12,000 people. But the Galapagos still retains something extremely special. 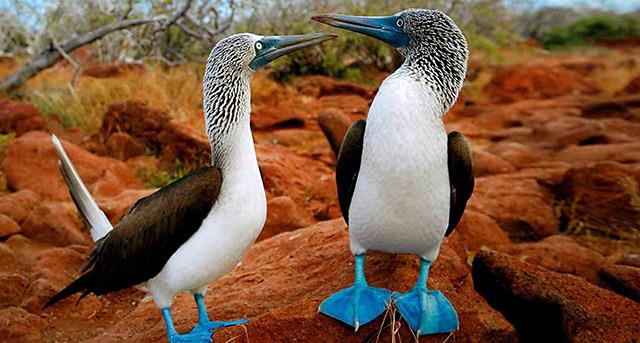 On the island of Santa Cruz, we spent the first day visiting the Charles Darwin Centre, which has a turtle breeding programme.  Walking back we came across the port-side fish market with giant sea lions pestering fishmongers for off-cuts. Giant pelicans also waited in the wings.

The food was delicious and homely but don't expect five-star cuisine. Some of the tastier treats included fresh coconuts and succulent roast chicken.

On Santa Cruz we stayed in an extremely comfortable hotel, with fantastic views over the harbour with the water glistening in the pink sunsets.

After a night in the small town we embarked on a two-hour boat ride to the more remote - and mysterious - island of Floreana. As we chased the dying sun a pod of bottlenose dolphins danced before us - at one point I spotted seven in the water, with one leaping into the air and performing a balletic twirl. 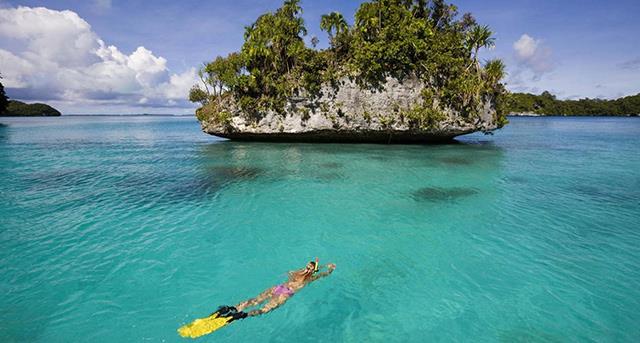 On Floreana I had one of my most memorable wildlife encounters - swimming with sea turtles and a speedy penguin!

Making our way along a path made of lumps of lava rock, Alex took us to a sheltered cove where the snorkelling was amazing. Dozens of stingrays lurked on the white sandbeds, while sea turtles glided by. My finger constantly clicked my GoPro as things popped up left, right and centre.

Venturing into the cloud-covered hills we visited a giant tortoise sanctuary to watch the incredible creatures lumber through the undergrowth, craning their wrinkled heads in search of food. The word Galapagos is said to come from the Spanish for saddle, because the first settlers thought the giant tortoises looked like crawling saddles. 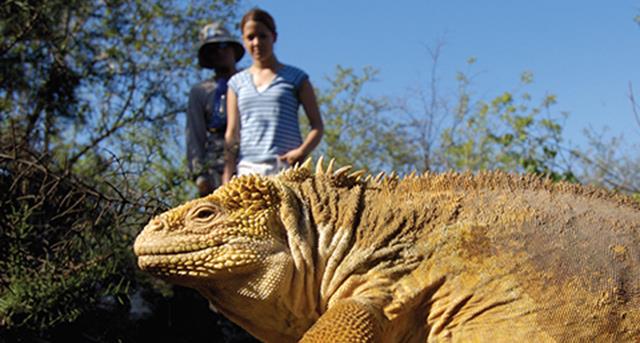 The islands are home to many animals including the Land Iguana

The history of the Galapagos is fascinating - tales of pirates, love affairs and, of course, Darwin's nature discoveries.

Next was another two hour boat journey, to Isabela. She admitted that island life takes a bit of getting used to and you 'definitely have to be comfortable with your own company'.

This island is brimming with sea lions, the air punctuated with the sound of them grunting and splashing around.

In the words of Darwin 'the natural history of these islands is eminently curious, and well deserves attention' but let's hope that this attention doesn't get out of control.