Based on 10035 reviews on Trustpilot

What 1895 DialAFlight clients thought of Spain

Very good - would use you again for flights and car. Very pleased

Riley is excellent and has a really personable manner.

Nadia a star as always!

Matt was very helpful and always got back to me

As previously experienced - extremely helpful in booking what we were looking for and providing really helpful information to assist our trip.

I will always use this superb service.

Ben is the best. Jeremy excellent in his absence

Excellent customer service, support and professionalism at all times which was particularly needed and appreciated. Being able to talk to someone who could provide active help and reassurance was invaluable. Have booked many times now with DialAFlight

Ross was great. We felt more confident to travel (with all that is currently going on in the travel industry) knowing he was there should problems arise.

Superb service - have already recommended you to many people! So impressed that you did all of our online booking for us as we were away from home and struggling on a mobile phone with poor internet. Thank you very much!

Lillie went above and beyond for myself and my husband with our holiday. Everything other than the packing was done for us. Excellent service.

Everything went perfectly smoothly as always with DialAFlight

Great service and thank you for the food update on the plane coming home .

Jenson, is the best

Everything went according to plan. It was good to know that you would be there for us had we needed you

Our first trip abroad in 3 years. Absolutely enjoyed it!

We had problems with our return flight on BA. Finn and Amelia were truly amazing and managed to get us back to London.

Five-star sparkle at the Ritz-Carlton Abama

This is a luxury five-star enclave sitting on the west coast of sun-soaked Tenerife... a year-round destination for warm weather that attracts a celebrity clientele. Its 72-hole golf course is a key attraction, as is a lovely gold-sand beach.

Vital statistics: A Moorish palace of excellence in Tenerife, set high on the cliffs, the terracotta walls of the Abama shore up the Canary island's most luxurious hotel. Surrounded by extravagant tropical gardens, you'll find nearly 500 suites and rooms amid its shady courtyards. 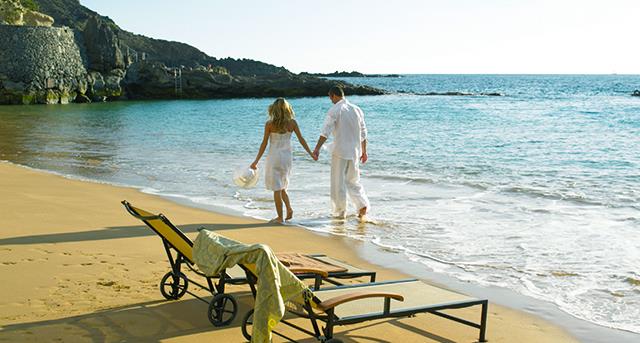 A stroll on the peaceful beach, which is reached by cable car from the hotel

Its cliff-top setting means that you'll be whisked down to the beach by a cable car, but if you want to stay put there are nine swimming pools, including an infinity pool at the cliff's edge that looks out across to the island of La Gomera.

Kabuki serves Japanese in a sleek red and black interior.

Eight others include Le Mirador, which specialises in seafood and has views of the ocean.

During school holidays, the bankers of Europe descend en masse with their young children. 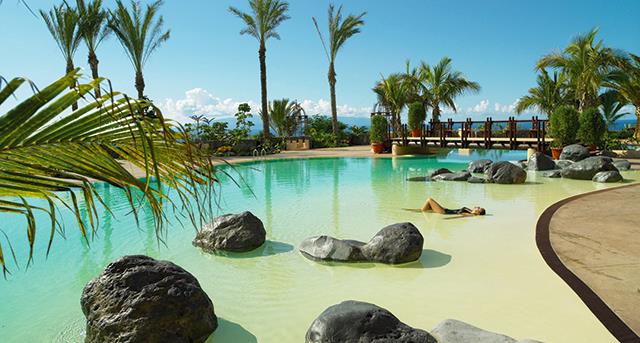 Rocks and palms fringe a clifftop pool at The Abama, with views across the ocean

If you want to escape beautifully dressed euro-tots, head to the Tagor villas. The most exclusive (and expensive) of all the Abama's rooms are reserved for over-18s, with complimentary drinks and snacks.

Another refuge for adults is the Abama's 72-par golf course. Considered to be one of Spain's finest, it brings golf-minded celebrities including Bill Clinton to the resort.

Other sports facilities include seven tennis courts - one a show court with seating for 600 people.

Location report: Tucked away on the west coast, near Playa de San Juan resort, which is a 15-minute walk away along the cliff. The rest of the island requires a hire car. 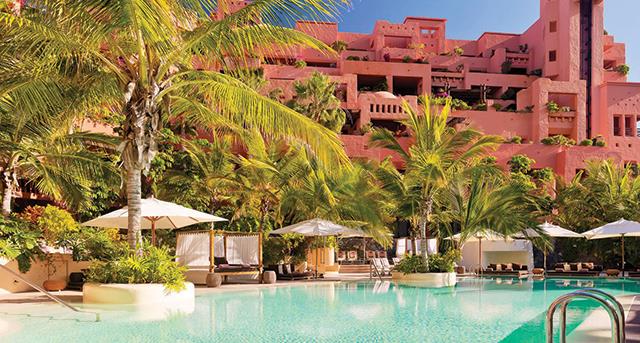 Shady spots surround one of the nine pools

Key attraction: Privacy and the sort of luxury that you normally find in only a handful of exclusive resorts around the globe. Reliable short-haul winter sun with Ritz-Carlton finesse (Asprey products in the bathrooms).

The hotel's extensive grounds are meticulously kept, and the beach has imported sand because the local stuff was considered to be a bit dark and gritty for the hotel.

In the news: Cruz and husband Bardem were at the Abama recently.

Good enough for the rest of us?: Technically, the Abama's beach is public - but access is almost impossible without going via the hotel.