Based on 11020 reviews on Trustpilot

What 2977 of our customers
thought of Middle East...

On another occasion I might pay the extra for a direct flight. Five hour stopover in transit left me feeling very tired.

Very helpful - always available. Thanks for arranging a smooth holiday for us, highly recommend you

Fantastic help on the phone

All the arrangements were perfect

Warren as always was simply fantastic.

The Aspire Lounge at Heathrow definitely not worth the money and wouldn’t recommend it to your customers. Nowhere to sit, food cold, service shocking and we paid for 3 hours but were asked to leave after 2 hours because they were closing!

You always look after us well which is why we repeatedly book with Travis.

Great customer service from Roy and the team.

Keep up the good work. Happy New Year from the Storey family.

Is Dubai the world’s most amazing city?

If we build it they will come' could be the mantra of the overarchingly ambitious project that is Dubai.

My first visit in 2002 was a stopover from Afghanistan where I'd been reporting for ITN. We were awed by the scale and luxury. We drank lurid cocktails at a swim-up bar and watched dredgers spraying arcs of sand into the sea. Someone said they were creating a huge island, the shape of a date palm. The idea seemed so fantastical as to be unbelievable.

Through audacity, far-sighted-ness and an ability to hold its nerve through the financial crash, Dubai has created a futuristic mega-city that's now the fourth largest tourist draw on Earth.

If visitors ask to see the 'real' Dubai, they're pointed towards The Creek, where wooden boats once fished the saltwater inlet and traders from India and East Africa supplied souks on the water's edge. There, visitors are assured, they can still find authentic heritage. But the Creek is being transformed. Tourist boats still chug down the waterway but today they're spotting super-yachts and giddying construction projects.

And its centrepiece, sitting long and low on the waterfront, is one of the most ambitious and high-end hotels to date - the Palazzo Versace. Imagine fusing the most flamboyant Italian fashion house with the pulsating emporium of wealth and ambition which is Dubai. You might picture the result as a fest of gaudy excess. 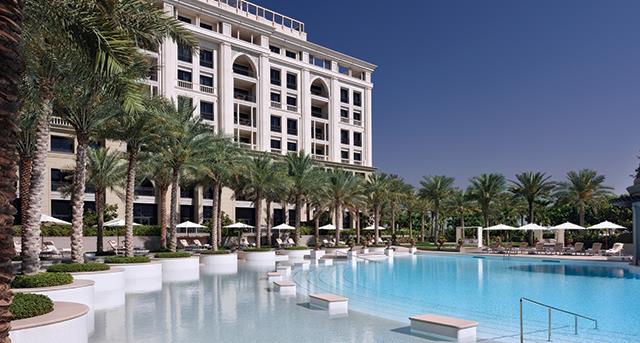 Yet the Palazzo Versace, a vast neoclassical construction that resembles a 16th Century Italian palace is, dare I say, subtle and tasteful amid gold and glass skyscrapers that pierce the clouds all over town. It may be restrained in Dubai terms, but it's not low-key. The entrance has striking high ceilings, and a huge glass frontage overlooking the water.

There's the vast mosaic on the floor, made up of more than a million pieces and the size of an Olympic swimming pool, beyond which there is, well, an Olympic-size swimming pool.

And marble everywhere. Then there are the furnishings. Every single piece of furniture and fabric in the hotel's 215 rooms and suites is designed and tailor-made by the House of Versace.

At this point I may have been reviewing the wisdom of bringing my three pre-teenage boys along. I wouldn't let them walk past a Versace store at home for fear they'd cause costly damage; now they were effectively living in one.

Yet, from the off they rose to the challenge. They might have spent the whole first day in their vast room playing with a console that created mood lighting and operated the curtains had our butler (yes, really) not offered them a hotel tour.

They discovered the central infinity pool is for adults only but as there are two other huge pools, it wasn't exactly a hardship.

They were quickly on first name terms with most of the staff. They struck up a friendship with a Malaysian chef who sent over duck pancakes each time we ate at the fantastic buffet. 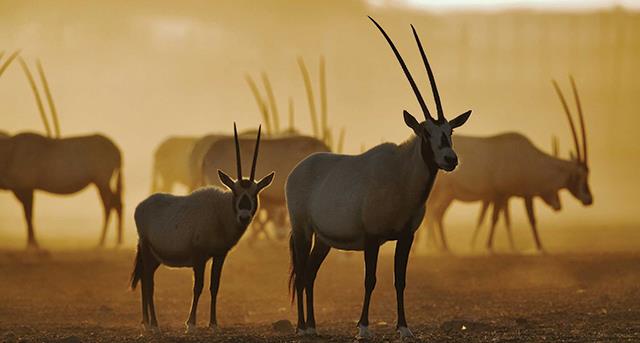 Arabian Oryx in the desert dusk

We swerved the famed shopping malls (some the size of 50 football pitches), instead heading to the desert in search of adventure. Our guide, Saleh, looked incongruous in the marble foyer in a huge pair of desert boots, as did his 4x4 among the Ferraris and Bentleys outside.

But half an hour later the skyscrapers had given way to sand dunes and we were spotting oryx resting in the evening sun.

That was the calm before the sand storm as the dune bashing began: this is a sort of do-it-yourself rollercoaster where your vehicle climbs to the top of a dune, then lurches perilously down the other side. 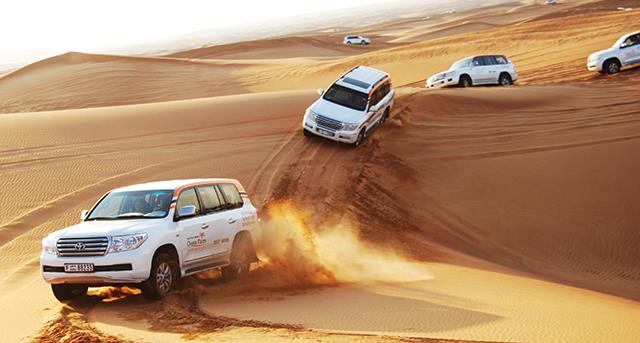 Another day trip was to a water park where my children sought out the scariest rides. As a gift to myself, for surviving, we had dinner in the Palazzo Versace's Enigma restaurant. The restaurant showcases top chefs from around the world. Each comes for a three or four-month stay. We were fed by Quique Dacosta, who has a three-star Michelin restaurant near Alicante. It was an incredible sensory experience. 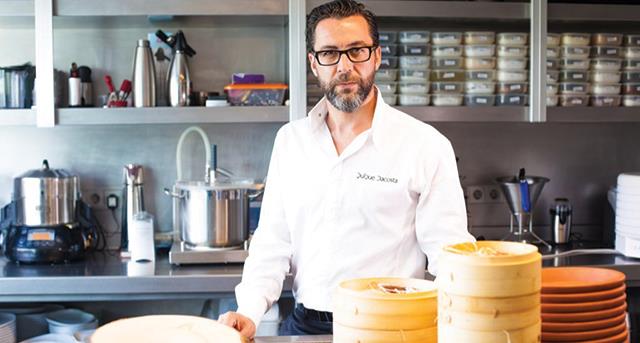 This hotel is the centrepiece of what Dubai calls its 'Culture Village'. If you think culture and Dubai don't belong in the same sentence, that's to underestimate its incredible vision. In a few years Dubai will have an opera house to rival Sydney's.

So could this centre of conspicuous consumption become a destination for art and culture tourism? You wouldn't bet against it. After all it's not as farfetched as building a giant island shaped like a palm tree in the Arabian Gulf.