What 2986 of our customers
thought of Middle East...

We had a nice break - hotel was great, flights were on time. Organised own transfer as per DialAFlight suggestion using Transfeero, who were efficient and arrived on time.

Excellent service, many thanks. Will definitely use DialAFlight next January when I do the trip again

I have now flown several times through DialAFlight - absolutely brilliant! I have recommended to other family members who also commented on the brilliant service

Have been using Damian now for 25 years and have recommended him to many, many friends over the years as he is excellent

Competitively priced and always available to answer any questions.

Great service. Did not care for the hotel - JA Ocean View

Very pleased with service and will use again and recommend.

Thank you to Teddy Ramage, a star.

Jazz, fine dining and watersports - there's more to this desert playground than mega malls and Western nightclubs, as Sara Malm found out

It has become the playground for celebrities and the destination for those looking for that little bit extra. Because Dubai is definitely extra.

It’s a chocolate gateau encased in gold leaf served on a diamond platter.

You struggle to find a burger that hasn't been improved with truffle and foie gras. Robert Cavalli has his own club. The buildings are taller, the shopping malls bigger, and everything, apart from the actual desert itself, is shinier.

However, I found myself positively surprised at the real gems I found among the oversized rhinestones. I discovered a lot of genuine hospitality once I scratched the surface.

I wanted to experience food that reflected Dubai. When I was recommended OKKU I raised an eyebrow. Japanese? Really? But I found everything at OKKU crafted to perfection and - of course - topped with truffle and foie gras. 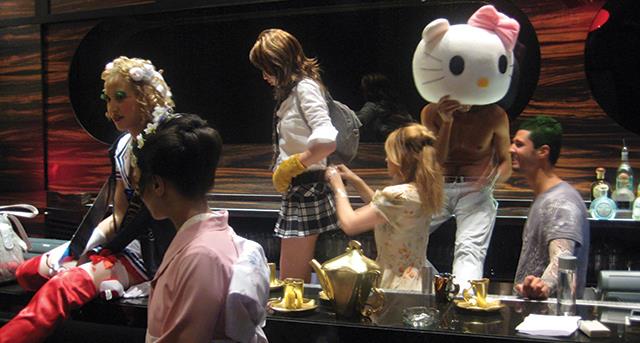 It is never a dull evening at OKKU

My Dubai companion and I kicked off the evening with a cocktail masterclass by OKKU's top man John Leese, Middle East Head Bartender of the Year.

Despite it being years since I was a terrible bartender and a slightly better cocktail waitress, I managed to shake up some rather tasty drinks.

After John regained control of his shaker, we fell head over heels for his Hanafubuki cocktail, a twist on a classic Clover Club with gin, raspberries, peach liqueur and topped with bubbles.

The drinks were accompanied by edamame in a truffle teriyaki sauce which had me asking for a spoon.

And then the food. Highlights included: The 'O Style' Avocado Volcano, which was set alight in front of us. Usually I consider setting food on fire a bit naff - but in this case, I am prepared to make an exception.

A Yuzu-Saikyo Miso black cod stopped conversation and I lost my Wagyu beef virginity to what may be the finest piece of meat I have ever put in my mouth: cooked table-side on a hot Himalayan salt stone with garlic-soy and oroshi ponzu.

Other restaurants worth a visit: Hakkasan's Dubai venue offers a range of set menus, such as Taste of Hakkasan. Do not leave without having the Jasmine tea-smoked Wagyu beef ribs.

And don't miss the all-you-can-consume Friday brunch at Saffron at the Atlantis Hotel.

When the PWYTs (Pretty Wealthy Young Things) get bored of the couture shopping (Dubai is home to the world’s biggest mall – which has a footfall of 80million per year, and they are building another one) they get into watersports. 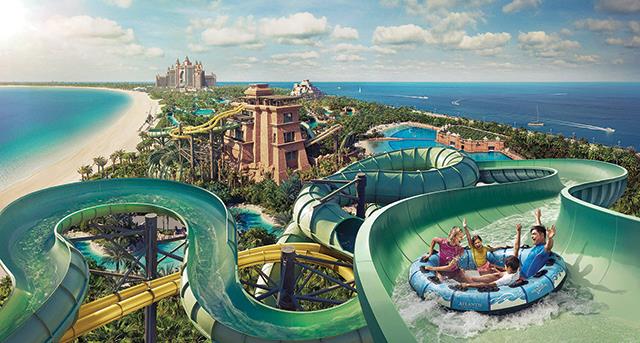 Aquaventure Waterpark on the Palm

We spent an afternoon at Water Adventure Dubai, which offers everything from jetskiing and wakeboarding to fly fish rides. My Bond girl dreams were fulfilled when I found myself sitting inside the 'head' of a motorised shark, which speeds off across the surface at up to 50mph.

Dubai visitors who want to spend a day at the beach outside of their hotel are recommended to do so at a Beach Club. There are public beaches, such as Kite Beach, but you need to bring your own parasol/lounger/refreshments.

RIVA Beach was a welcome oasis of peace, located right on Palm Jumeirah. As well as a good lunch spot, it has the benefits of current-free water and gorgeous sunsets.

Many of the clubs in Dubai are names known around the world - Mahiki, Amika, Movida. We headed to Pacha - which, instead of importing their concept from London or Ibiza, has a distinctly Dubai flavour, which was very refreshing. 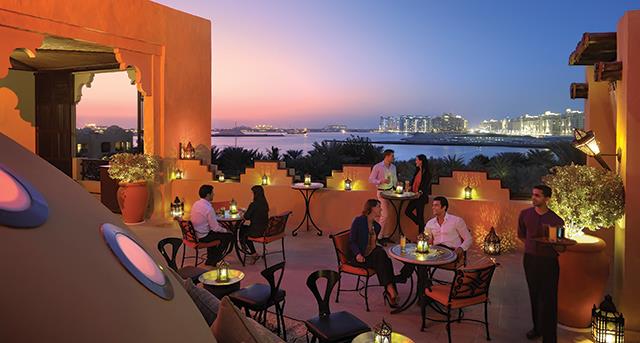 The evening starts with dinner - the Chilean sea bass was divine - served with a cabaret show, which mixes dancers, singers, a magician and acrobatic performances. The transition into a nightclub was seamless - suddenly we looked up and found ourselves in a club.

When I hear the name Robert Cavalli, I think of animal prints. Opulent yet tacky. However, Blasé  could not be further from this, so don't let the fact that it's located within the Cavalli Club at the Fairmont Hotel deter you. Blasé is sexy, sleek and intimate. And they play live jazz, every night.

The drinks list is excellent, but bar manager James Estes is more than happy to go off menu to find exactly what you're looking for, and I was served an Espresso Martini which has only been bettered by two people - the man who invented it, Dick Bradsell, and his daughter Bea.

Tip: Have tissues ready when you hear the opening notes of Georgia On My Mind. I had makeup streaming down my face.

Another hidden gem, Nippon Bottle Company, which opened earlier this year, is another speakeasy-type venue worth ending a night in.

Hidden behind a bookcase in the lobby of Dusit Thani Dubai, it has an impressive list of Japanese whisky, and a nice, chilled atmosphere.