Based on 10035 reviews on Trustpilot

What 671 DialAFlight clients thought of Phuket

Great holiday, everything pre-arranged and went as planned. Curtis also kept me informed of flight changes.

Nicole was first class all the way through our booking. Very informative and honest. Itinerary on the app was priceless with all the information to hand. Thank you for making our holiday as stress free as possible.

Been booking with Charlie Miles for over 12 years. I wouldn’t use anybody else.

Having DialAFlight support me during my journey to and from Thailand was a bonus. Travel isn't easy these days and airlines don't always deliver what you expect. The team at were there for me at the end of the phone ready to offer help when I needed it.

Many thanks to Jordan. Our holiday was amazing from start to finish. We will never book a holiday with any other tour operator. DialAFlight never disappoints. All our dreams came true

Cheers Brody, see you in November

You provided an excellent service and I have already recommended you to a lot of my friends,

My experience with DialAFlight in such challenging times was excellent. Graham has the patience of a saint

Great service, really impressed. Will be in touch later this year for some Australia flights.

All staff I spoke to were excellent - courteous and extremely helpful

I was impressed with the service given to us by Roray. Flights and hotel bookings for a group of 14 were seamless and everything worked out perfectly. I would definitely recommend you to my friends and family.

Once we were on holiday it ran like clockwork. DialAFlight were always on hand to deal with any issues. Would definitely use again and recommend if you like the personal touch.

Great customer service provided by Riley throughout. Would definitely use again and recommend to others. Thank you for all your help with this trip I originally booked in 2019

Thank you for "holding my hand" through the whole process.

Thanks to Colin for organising our flight - I'll definitely be using you again.

No problems, no delays

You all know Roger Moore, 007? If you are too young to know what he looks like, he looks like me,' said our small, squat, spectacularly un-debonair Thai tour guide, Captain Alex, with a deadpan face.

While not exactly shaken with laughter at his wry quips, everyone was stirred by the stunning scenery at Ko Khao Phing Kan, or James Bond Island, as this place is more famously known. It became a must-see site due to its double-O heaven setting in The Man With The Golden Gun, when Moore's Bond goes in search of Scaramanga, played with relish by Christopher Lee.

This was all heady stuff for a first-time visitor to Thailand, an exotic land that has also inspired on the big screen the sublime (The Beach) and the ridiculous (The Hangover, Part II). 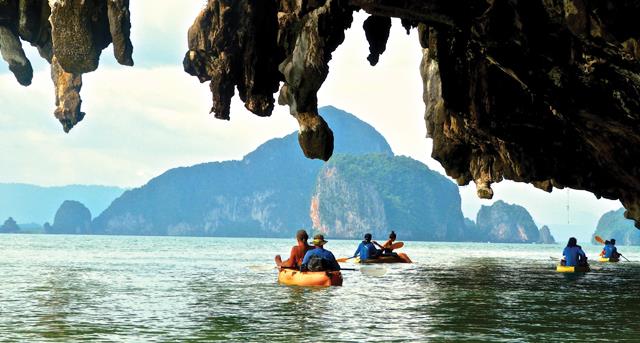 Kayaking through the limestone caves in Phang Nga Bay

Many writers, from Somerset Maugham to Graham Greene, have fallen for Thailand's bars, silk, curry and hospitality. Its ancient history, temples, islands and beaches, as well as the gentle people of unrivalled grace, have made it endlessly enchanting.

A small bit of detective work led me to deduce that John le Carré found his original inspiration for The Night Manager - his thriller televised this year - in Thailand after staying at The Mandarin Oriental hotel in Bangkok, on the banks of the Chao Phraya river.

I discovered his fascination for the legendary hotelier Kurt Wachtveitl, famed for decades for arranging everything with charm and discretion, just as we saw Tom Hiddleston's character do in the BBC series. More later about le Carré, a drunken night on champagne, and his eternal gratitude to the night manager.

But first back to James Bond Island. This speck in Phang Nga Bay is firmly on the tourist track as boatloads arrive to get their fix of the legendary spy.

Indeed, everyone else on our boat seemed to think they were wannabe secret agents, as the men stripped down to Daniel Craig-style swimming shorts and the women wore Bond-girl bikinis. They also donned their best Bond-villain shades for selfies in front of the limestone outcrops. 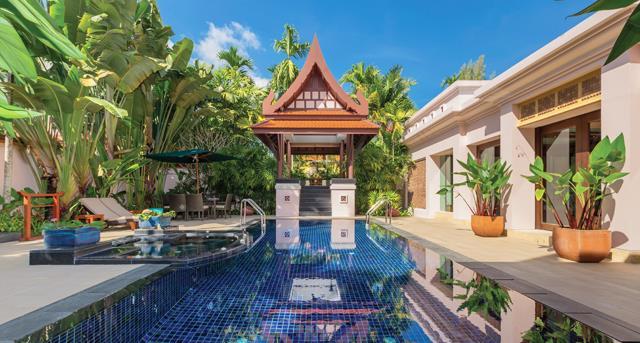 Thailand is known for its friendly people, and the Banyan Tree staff are no exception

Captain Alex's tour included kayaking into sea caves, shopping for silk and a lunch of fresh grilled fish, before driving back to the Banyan Tree Hotel in Phuket, a tranquil base where smiling courtesy is second nature to its staff.

Phuket became a favourite destination of backpackers in the 1960s and 1970s thanks to its sleepy beauty and sensational beaches, and luxury hotel chains soon discovered its appeal.

Many of the villas in the Banyan have a private pool, and you can have spa treatments in your garden overlooking the lagoon. Bicycles make it easy to get to and from the main lobby and its zen-like spa.

The starting point for my trip before heading to Phuket was Bangkok and the splendid Mandarin Oriental Hotel. Leave so much as half an apple in your room and it will be replaced within the hour. As well as supreme service, there is nothing the staff haven't seen, from Billy Idol smashing up his suite to Somerset Maugham fighting off a bout of malaria. 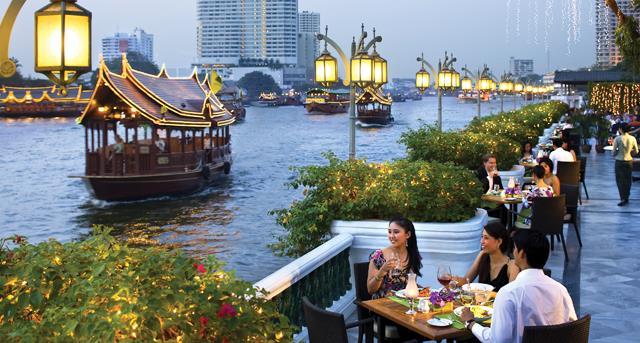 Some simple sleuthing persuaded me that le Carré first came across his inspiration for The Night Manager here. The clues were staring me in the face in the le Carré suite on the tenth floor.

A typed letter from the author is framed on the wall. He thanks the hotel manager for the incredible care and hospitality, having arrived 'tired, dusty and unannounced' after a 'swing through divided Laos' while researching his novel, The Honourable Schoolboy.

He recounts how he met up with a friend in the hotel and drank copious amounts of champagne, which annoyed a journalist from 'a lofty London paper' who was also staying there. 'I fear we may not have seemed as funny to him as we did to one another.' A year later, when The Honourable Schoolboy finally appeared, the same correspondent took time off from his political musing to give it a perfectly dreadful review.

The fact that le Carré bothered to send such a letter to the manager indicates his fascination at how Kurt Wachtveitl looked after him and the dozens of others guests, all seemingly effortlessly.

Incidentally, the room opposite le Carré's is the Barbara Cartland suite, for those who are more inclined to soft romance than spy thriller.

Just outside the hotel, Bangkok shows all its buzz and brashness, with street food, shopping (incredible silver), mai tai cocktails at sunset at bars both grand and grubby.

There has always a sense of being about to enter the land of all possibilities, be it The Beach, Bridge On The River Kwai, or Bond. Just remember not to turn it into The Hangover…

First published in the Mail on Sunday -  October 2016