What 3184 DialAFlight clients thought of Thailand

Thank you to Lucy, will definitely use again

All went very smoothly as usual. Amelia looked after me well

Glen Blackburn is a genius.

Sally Burton goes above and beyond. She has been simply amazing. I will never book a flight with any other company from now on. Thank you for an excellent service.

All good as usual

All very good and proactive

Spot on. Staff helpful and good flights at an affordable price.

Nick went above and beyond to assist on our group booking - a mixture of three families of mixed ages. Outstanding service!

Fabulous trip to Thailand, flawlessly planned and everything taken care off. Service as always was fantastic.

I have received a friendly, flexible and professional service from the DialAFlight team which has made my recent multi-stay trip to the Far East so much more than just a holiday. I will be booking another adventure very soon.

The 24/7 customer support was reassuring, although everything was perfect and we didn't need it.

Thank you to Bruce and his team for not only finding the perfect flight for me, but also for the after booking care and attention. Bruce knows that I only use your company to arrange flights and shall of course continue to do so in the future.

Gareth Carver was superb both in attention to detail and follow up.

Thanks Roger for all your support with our trip of a lifetime.

Wonderful service, will definitely use again and recommend to others.

Your service was excellent but we were disappointed with the hotel, it is not as nice as the other Centara hotels in Pattaya and although it is beyond the hotel's control at present the road outside is being dug up and it looks like a building site.

Always a pleasure to deal with you guys -professional and friendly saving me a lot of the stress that goes with post Covid travel. Recommend you highly to friends and colleagues

Smooth as silk. Everything was perfect from start to finish.

Having used DialAFlight for many years now and always received excellent service from all staff. I always prefer direct contact with people when booking flights, rather than using the internet and risk making errors.

Troy's service was excellent, as always. Thank you!

One night in Bangkok? Let's make it two…

Relentlessly busy, noisy, smelly and stiflingly hot: yes, parts of it are and it's easy to see why, for many, Bangkok is little more than a place for a brief stopover.

But dig a little deeper and you'll find a burgeoning arts scene, a raft of new restaurants and elegant galleries.

Day 1, morning
We arrive in the Thai capital after a week on the idyllic island of Koh Lanta. The sparkly new Airport Rail Link City Line runs every 15 minutes from inside the terminal, costs 45 baht (about £1) and takes just 25 minutes to the city's central stations.

As a rule, getting around Bangkok by public transport is far less hassle than using taxis, which can sometimes overcharge or take overlong routes. Our first stop is the Mandarin Oriental, the chain's 140-year-old flagship property, affectionately known as La Grande Dame. It's on the edge of the buzzy Silom district, a colonial-era oddity in a city full of 1970s concrete blocks and glass skyscrapers.

Even if you're not checking in, it's worth taking high tea in the Authors' Lounge.

The hotel is famous for its writers-in-residence, from Dame Barbara Cartland to Somerset Maugham and Gore Vidal. 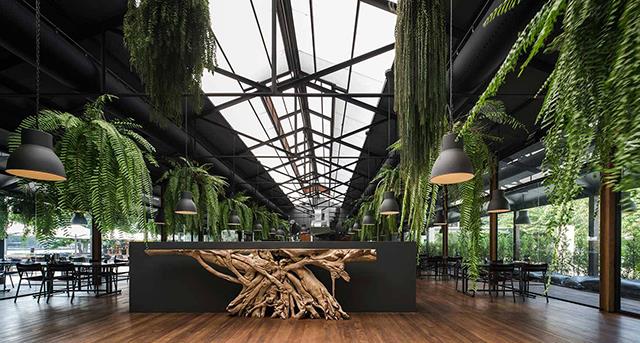 Afternoon
We head for a late lunch at The Jam Factory arts complex, part of the city's new Creative District. The Jam Factory is a converted factory - a collection of low-rise, industrial-style glass-and-steel buildings sit around a central garden courtyard.

At our restaurant, The Never Ending Summer, a Buddhist ceremony is going on in the garden. Monks wrap silk ribbons around huge trees, adding to the peaceful vibe. The food is show-stopping: grilled catfish with sweet sauce and stir-fried glass noodles are musts.

Afterwards, we drop in to Santi Chai Prakan Park, the site of a blindlingly-white 18th Century fort where at 5pm every day there is communal outdoor aerobics, yoga or dance classes.

Even if you're not feeling quite that energetic, it's brilliant to watch.

Day 2, morning
After a late breakfast, we go to the Artists House - otherwise known as Baan Silapin - in the trendy Thonburi district. This is 'old Bangkok' - sleepy, wooden buildings and winding alleys that fringe the canals. It's off the beaten track but worth visiting. 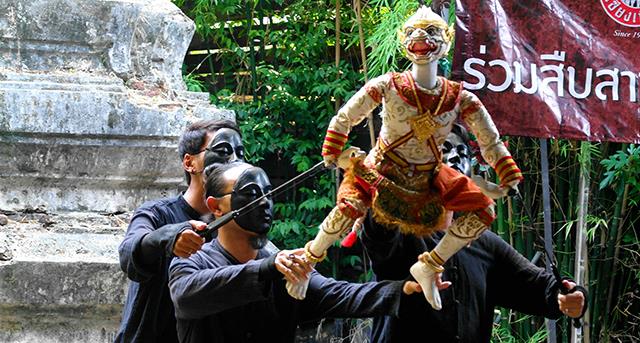 Masked puppeteers with marionettes perform at The Artists House

The Artists House is a 200-year-old teak building. As you wander along the canal past little cafes serving stir-fried dishes, every now and then an elderly lady on a boat will pull up to sell skewers of barbecued meat.

You'll probably not see too many tourists in this part of the city, bar the occasional boat-load being whisked along a canal.

The House itself is built around a 700-year-old Buddhist stupa, and at 2pm you can watch a traditional Thai marionette show. Children are invited to paint paper masks and take part.

Afternoon
Fully prepared to get a bit lost, we head east over a footbridge and into the bustling streets around Soi Charan Sanitwong, where street vendors sell fried fish balls, noodles and sweet treats. 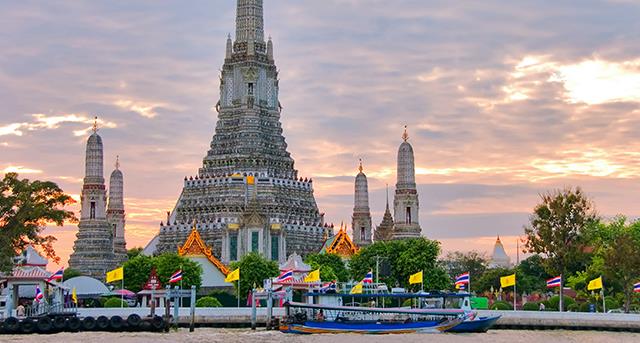 As the sun goes down, we stumble upon a night market - food, toys, electric goods and clothes are all for sale and cost next to nothing - then keep heading east to Wat Arun, one of Bangkok's most iconic ancient temples, overlooking the Chao Phraya river. From there, a river taxi will take you back to the other side, where we drop into The H Gallery, which shows Thai art in a beautiful 125-year-old mansion.

In the evening, we head to Maggie Choo's, a subterranean bar, restaurant and live music venue beneath the Novotel which is famous for its drag shows.

Later, if you're feeling brave, try a foot massage at one of the spas lining the streets. A super spot for a relaxed late-night drink is the Long Bar at the five-star Shangri-La Hotel. The bar is alongside the river, and offers impressive views of the city as well as classic cocktails.

Finally, back to our hotel where there's just time for a further nightcap at the cosy Bamboo Bar, with a jazz band still in full swing.

If you can survive the hustle and bustle of Bangkok, there are plenty of reasons to make this city more than just a one-night stand.

Kamalaya is the perfect retreat for a rejuvenating break

Kamalaya is the perfect retreat for a rejuvenating break