Very professional service - Harry went out of his way to accommodate us (even staying after normal working hours while waiting on flight confirmation). He also frequently emailed with reminders of check-in times etc

Abi was excellent, will highly recommend her

As always, reliable, friendly and helpful. Simply the best!

Very helpful and peace of mind that someone would be at the end of the line if there were any issues.

I probably paid more than necessary for the car hire as we asked for a small car and got a large one! Or maybe a we got an upgrade? Everything else was excellent. Well done

Marco Verner and his team produced another excellent adventure in South Africa. Travelling the Garden Route and finishing with a wonderful safari. All the accommodation was first rate

It's great to have someone on the phone and to confirm if the flight times have changed at all. Using DialAFlight is very competitive financially and gives me peace of mind.

Peter is very good when it comes to booking my flights. He is always pleasant and willing to help accommodate me.

Never use the cheapest car hire with Avis again. The Renault sqwd was totally underpowered and the AC almost useless. Everything else OK

Although DialAFlight always exceeds expectations we will never use Lufthansa again. Cancellations with no reason, delayed flights, rude or non existent airport staff - Frankfurt the absolute worst and we are still waiting for an update on our delayed baggage

Very helpful staff and excellent service from day one.

Thank you to Aidan Pinder for reallocating my flights so smoothly.

Grant and his team were excellent from start to finish.

Glen Blackburn was fantastic. He helped us secure a gluten free meal for the flight and gave some really helpful tips about places to see in and around Cape Town. Friendly and confident service the whole way through.

Callum was as amazing as ever

Always there and always excellent!

Excellent and friendly service. Definitely use again. Dylan was a star

We would like to express our thanks once again to Sebastian Patel for his time, care, patience and understanding shown to us throughout the many months/years preceding this recent trip which was enjoyed by us and more importantly by our daughter and family who joined us.

We have been booking our holidays with DialAFlight for nearly 20 years and more recently with Callum. He is always super helpful and finds the best package to suit our needs

Best thing was individual service we received from Marie

I’ve been booking my trips to South Africa through DialAFlight for many years and always had great service. Amy is brilliant

Such a pleasure to not have to stress and the feeling of being supported is a really good experience. Thank you very much Greg and team for seamless organisation.

Can’t thank Gerry enough for putting our package together. He's helped before but this surpassed all expectations.

A sip by sip guide to the Cape

In the heady beauty of South Africa, Helen Atkinson Wood finds herself in a wine-taster’s paradise

An 11-hour overnight flight from Heathrow finds you blinking into the sunrise of another clear blue Cape Town morning. We had come to sample the sauvignon, sip the shiraz, marvel at the malbec, and also savour the world-class cuisine. But why, you may ask, travel to the southern hemisphere to experience what we have right here on our European doorstep? You obviously haven’t been to South Africa.

This pilgrimage to the wine-taster’s paradise of Franschhoek began not with an aperitif - say a Graham Beck Game Reserve chenin blanc - but with an appetising few days in Cape Town to acclimatise.

Our hotel, the Cape Grace, sits like a luxury liner alongside the lively marina. It’s in a fantastic location, with the harbour flanked by the flat-topped Table Mountain.

From here, you can take a tourist bus ride around the city, a cable-car trip to the top of Table Mountain, and then shop until you drop when you return to the Waterfront area.

At the Baia restaurant, we feasted on seafood bisque, lobster and langoustine - and were then presented with a bill as cheap as chips.
If you are looking for something more sedate, the colonial grandeur of Mount Nelson is the place to take afternoon tea. However, if I could eat only one meal on the Cape it would be at The Pot Luck Club, the hottest restaurant in town. 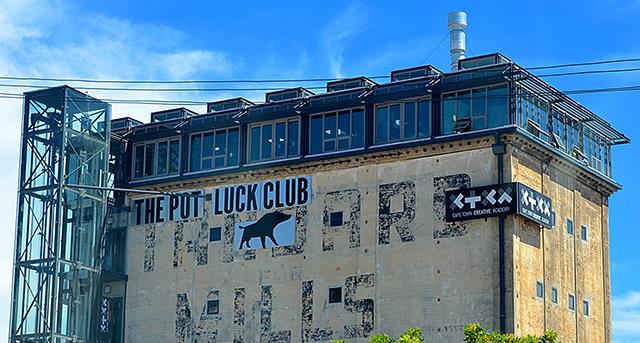 Tables are in high demand at the Pot Luck Club, on the top floor of the Old Biscuit Mill

After our stay in Cape Town, we drove past skyscrapers, high-priced apartment blocks and the sobering miles upon miles of poverty stricken townships before breaking into open countryside and climbing through the Helshoogte Pass, with its amazing panoramic mountain views.

Just 90 minutes later we were in a different country - think Tuscany comes to Cumbria, with some Dutch gable architecture thrown in for good measure.
In fact, it was the Huguenots who brought their distillery skills to this verdant triangle of South Africa. Hotel and villa operator Relais & Chateaux has now captured a corner of Franschhoek and discreetly created the Provencal-style retreat of Le Quartier Francais - so discreetly, in fact, that we drove past without noticing it.

In the spirit of, say, a complex table wine, the hotel opened up with a series of delicious surprises. An opal-shaped pool, a tranquil hidden garden, a lavender-lined walkway, the inner sanctum of The Tasting Room restaurant, and stylish glass-walled conservatory, all set within the charm of a Victorian village square and leading out towards the colourful Franschhoek Main Street. For the connoisseur there is a glorious menu of wine estates to visit in this area, with restaurants and tastings on tap. 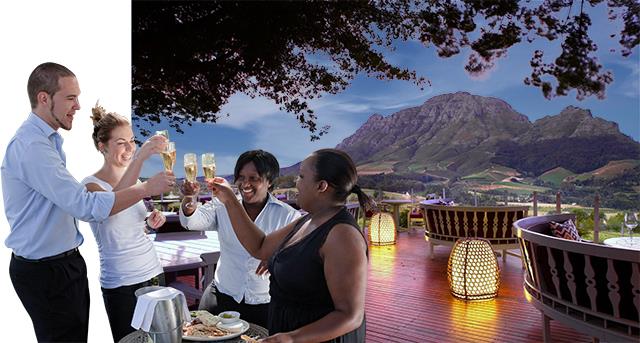 Al fresco dining at La Petite Ferme at Franschhoek, a restaurant with a rugged outlook

La Petite Ferme sits up at the back of Franschhoek and has spectacular mountain views and a mouth-watering lunch menu. Delaire Graff is a gem of a wine estate, where you can view the oak-barrelled seasoning process, or visit its famous art collection, including Tretchikoff’s Chinese Girl (it’s said to be the most reproduced painting in the world), and a diamond showroom on which the Graff fortune is built.

We opted for the hop-on, hop-off Franschhoek tram tour of the vineyards, along with a boisterous party who got ever squiffier as we rum-bled from one distinguished estate to the next.

The history of Franschhoek stretches back more than 300 years to when persecuted Protestants from France fled to the Netherlands only to be persecuted there too. From the Netherlands, they were transported as refugees to the South African Cape.

Nine of those Huguenot families settled in Franschhoek and transformed the wilderness into one of the most beautiful wine valleys in the world. It’s a pleasure to drive in South Africa - and on the left too. But the open-sided tram left us free to really enjoy the exceptional wines on offer.

There was Mont Rochelle’s chardonnay, fermented in a butterscotch-flavoured barrel, La Couronne’s plummy malbec which we partnered with a local cheese platter, and my favourite, Moreson’s In My Bed cabernet sauvignon merlot.

Moreson’s has a brilliant collection of wines, wittily named around the good-natured naughtiness of their Weimaraner dog. Rather tipsily, we left the tram party to the strains of Chicago’s If You Leave Me Now, as the rest of the travellers continued the journey.

We needed all our concentration for the task ahead: a night in The Tasting Room at Le Quartier Francais. There are restaurants around the world that are worth making a pilgrimage to - and this is certainly one of them. Award-winning chef Margot Janse weaves her magic in the kitchen, combining earthy African and sophisticated French to create some audacious flavour combinations.

Janse once considered a career in the theatre - and each of the eight courses, accompanied by a different wine, was drama on a plate. There was texture, humour, sex appeal and surprises with every mouthful. The Eastern Cape marron crayfish, Cape gooseberry and lemon verbena was like leaping into the freezing Atlantic - so tinglingly exhilarating I nearly had to go change into my swimwear to eat it.

We finished our trip on the coast at the glamorous Twelve Apostles Hotel and Spa in Camps Bay, but not before sweeping up some booty from Ebony, the Cape’s equivalent of the Conran Shop. 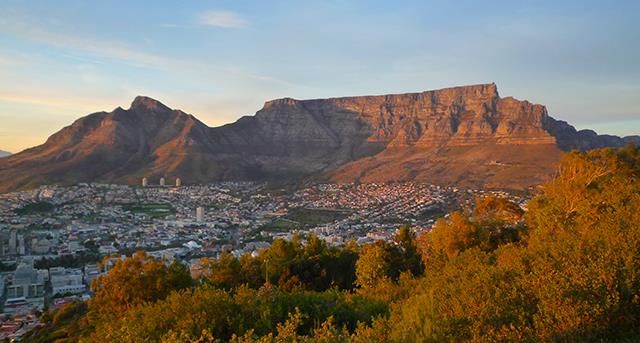 Dropping down into the foothills of Table Mountain to the unabashed luxury of Twelve Apostles was like being greeted with a glass of Klein Constantia Vin de Constance - a silky, rich dessert wine much loved by Napoleon.

But there was one more thing left to do before we returned to Britain. Well aware that we had the good fortune to taste the best that South Africa had to offer, we took the sobering trip out to Robben Island, where the country’s former president Nelson Mandela was imprisoned for more than 27 years.

To be privileged enough to come here and not pay homage to one of the most inspiring figures of our time - or any time - would be missing the point of South Africa today.

First published in the Mail on Sunday - January 2015