The one aspect that let David down was that we thought DialAFlight would notify airline at time of booking of requirement for gluten free food.

Holiday was amazing and the hotel Movenpick was great. Deborah did an amazing job in sorting out the flight for me. Just a few points . There should be a longer layover in Doha as the lounge is amazing and had barely 5 minutes to enjoy it. I only managed a shower and a bite. Also it might be easier having Qatar airways all the way rather than BA.

Excellent service and would thoroughly recommend. Dealt with Samuel and he is excellent

Shame about the airline

Our first stop was the island's gateway, the bustling capital of Colombo.
The combination of energy-sapping heat, beeping tuk-tuks and congested streets make it all rather bewildering at first but a whistle-stop tour of the sprawling city provided a fascinating snapshot of life in the frenetic heartbeat of Sri Lanka.

We ate at the superb Ministry of Crab, owned by cricket stars Mahela Jayawardene and Kumar Sangakkara, in the buzzing financial district.

The following morning we took the train to historic Kandy along the track built under British rule, through lush green hills.

Kandy is home to Sri Lanka's most important religious shrine, The Temple of Tooth, as well as to the greatest bowler ever, Muttiah Muralitharan, affectionately known as 'Murali'. We stayed in the stunning Theva Residency. Perched high above the city, it's away from the bustling centre but only a short tuk-tuk drive from the thick of the action.

Spacious rooms boast impressive views over the city and Richmond Hill, which can be enjoyed from the comfort of the bathtub next to enormous windows.

From Kandy we made our way to Sigiriya, a russet rock that towers 600ft above arid plains. 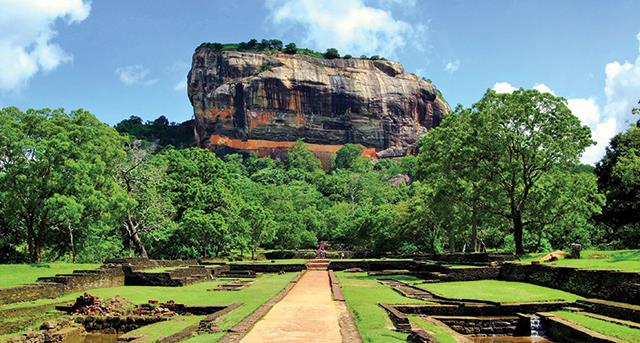 Our chauffeur stopped on the way at the Luckgrove Spice Garden in Matele, for a fascinating insight into herbs and spices used in Sri Lankan cuisine.

Further north we called in at Dambulla, famous for cave temples - which involved a challenging half hour trek to a hilltop. All five temples are different but each lovingly decorated with beautiful murals. 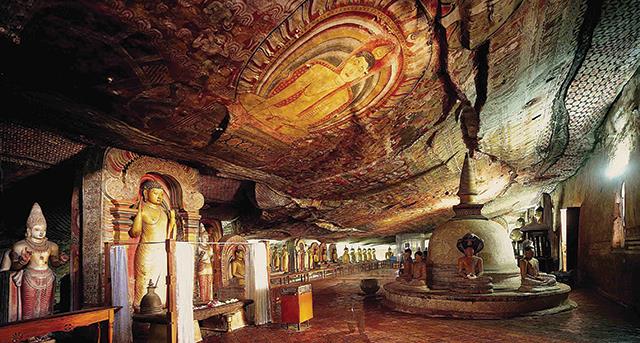 One of the five lovingly decorated cave temples at Dambulla

In Sigiriya, we stayed at the magnificent Jetwing Vil Uyana, in the shadow of an historic rock fortress.

The eco-friendly hotel has drawn inspiration from local traditions. Guests are housed in individual thatched huts modelled on Sinhalese dwellings - which manage to be both homely and grand. Each comes with its own blissful ice-cool plunge pool.

Facilities include a spa – reached via a boardwalk over a lake – and a wonderful pool. A number of excursions were laid on, including a loris trail with resident naturalist Chaminda Jayasekhara.

Breakfast and dinner are served in an open dining area overlooking the lake (which has a crocodile gliding around in it).

Vil Uyana is perfectly positioned for the steep climb to 'Lion's Rock', best done at sunrise or sunset to avoid the worst of the heat.

We then headed to the east, still finding its feet following the end of the civil war in 2009. 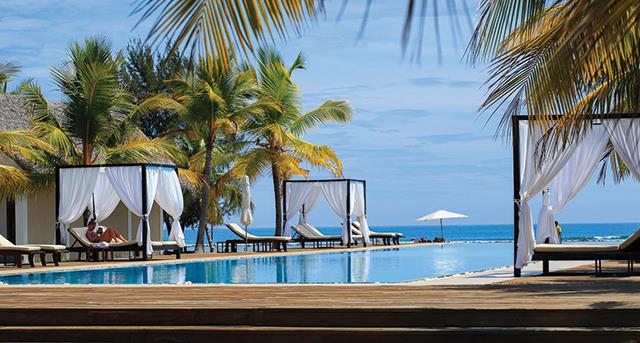 The government is investing time and energy into restoring the area to its former glory. This has seen many resorts spring up along Pasikudah Beach - we stayed at the newly-built Anilana Pasikudah for two nights.

The gleaming hotel has an attractive foyer that looks out over the pool and beach and sea, giving an immediate 'wow' factor.

Our final stay, in Gal Oya Lodge, was the highlight. Tucked away on the northwestern edge of the Gal Oya National Park, it's a gem.

It was set up by boyhood friends Tim Richards and Sangjay Choegyal (as well as John Balmond, the son of architect Cecil) who fell in love with the place during an extensive tour of the country.

They set about building a lodge in the jungle and their love for the beautiful surroundings really comes across when you speak with them - theirs is the only lodge in Sri Lanka to receive a platinum award for their efforts to help the environment.

We had a tour of the local indigenous community (the Veddha) led by the tribe's deputy chief, who explained their use of medicinal plants, ancient hunting grounds and historic cave dwellings.

We also made the short trip into the national park, home to rare birds such as the blue face malkoha, painted francolin, hoopoe and Indian peafowl, spotted deer, wild boar, monkeys, and, most excitingly, elephants. 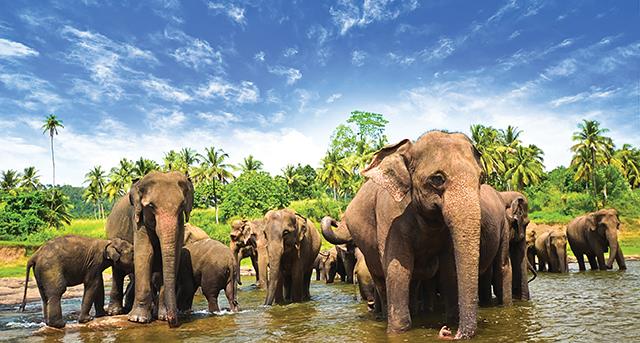 Elephants are an intrinsic part of Sri Lankan life

On an evening visit we heard a crash in the foliage - and just yards away came the trumpeting call of an elephant, a thrilling if nerve-racking experience.

We remained motionless as the elephant trampled through the plantation, a few feet from the jeep, before sidling away.

We also explored the national park via boat. We bobbed along the lake, taking in the beautiful sight of birds – including white-bellied sea eagles – gliding gracefully across the sky until a guide excitedly shouted 'Elephant'!

There was a majestic 20-year-old male, grazing on the riverbank. We sat for half-an-hour watching the elephant, as the sky turned a wonderful shade of red. It was a stunning sight and a fitting finale to our stay on the paradise island.