From Galle by the sea to the spectacular tea plantations, Freddy Halliday finds the air in Sri Lanka is filled with optimism

We're sitting in a balcony restaurant in the Old Town, with views over the ramparts to the becalmed Indian Ocean beyond. It's our first night.

'Ah, wonderful,' says an Englishwoman, emerging from the stairs below.

'I was up at 5am swimming with sea turtles just off Galle Fort. You should try it. What a way to see the sun come up.

'Watch out for the snake-charmers on the harbour walls and the thrill-seekers hurling themselves off the rocks.

'This island has really changed since I first arrived,' says Juliet. 'It's become like St Tropez. You're in for a treat.'
She's right.

I first came here eight years ago, and now, with its jewellery shops, cocktail bars, ornamental Buddha statues and lounge music, Galle has completed its transition from hippy backpacker town to a boho-chic enclave.
Bang in the middle of the fort (but still only five minutes' walk from the sea) is our hotel, The Fort Printers.

It's an engaging modernised 18th-century colonial mansion, which was a private school during Dutch rule, so all the rooms have scholarly names: The Headmaster's, The Prefect's, History and Geography.

The rooms are elegant and spacious, and the Frangipani tree overhanging the pool means the water is covered in white flowers. 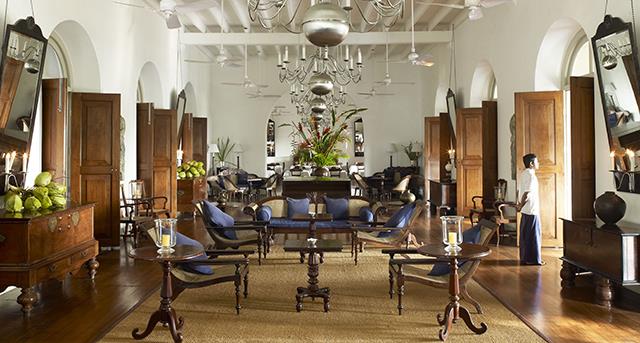 The elegant calm of Amangalla Hotel

Or you can have bowls of fresh fish curry.

Five minutes away is Amangalla, the most famous hotel in Galle (part of the ritzy Aman Group), with 130 staff and its own library, private swimming pool with individual cabanas and a magical garden. We eat famously here.

Galle Fort is a UNESCO heritage site, so it's bound to attract the crowds.
But travel ten minutes beyond the walls in a tuk-tuk (a mechanised rickshaw) and you can watch local fishermen sell their wares with ruthless efficiency.

Galle cricket ground is a joy, and try the escorted bike rides through local villages behind Dalawella Beach with British-owned start-up company Idle Bikes (fifteen minutes away from Galle by tuk-tuk).

For 2,000 rupees (£10) per person you get a guided cycle tour through quiet paddy fields, a bird sanctuary, cinnamon and banana tree allotments, and past open fires where wives cook curry.

Our guide, Kingsley, drives us to Balapitiya Boat Safari — where we take a tour of 64 tiny islands in an enormous inland lake near Bentota.

This is a wonderful way to see Sri Lanka's wildlife: baby crocodiles, fruit bats, monitor lizards, monkeys, and even a brief stop-off at a cinnamon-growing island and a Buddhist temple.

You can get a personal boat for two hours for 6,000 rupees (£30).
And make sure you dangle your feet in the local fishing nets for a genuine fish pedicure. 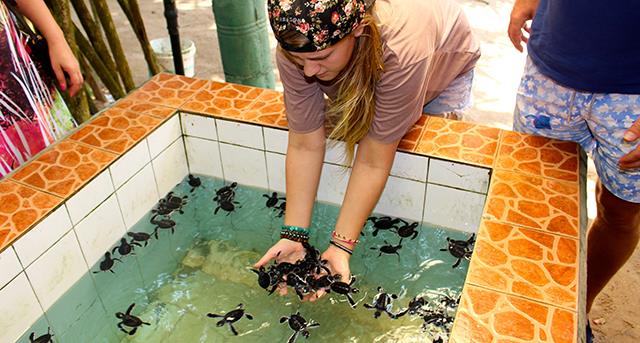 Tiny turtles at the Bentota Hatchery

On our way back to Galle, we swing past The Bentota Turtle Hatchery to see the famous snow white albino turtle ('One in a million, just like Michael Jackson,' jokes Kingsley) and watch the 24-hour old baby turtles being guided back to the sea under the cover of darkness, protected by the wardens.

After a few days, we drive three hours east along the spectacular southern coastal road for one night at Coco Tangalla — a pretty boutique beach villa with four rooms overlooking Tangalla Bay.
It's wilder here and less touristy, and the enormous palm trees and ocean breeze make it feel like Hawaii.

Our final hotel is Ellerton, seven hours drive north from Tangalle (and 2,400ft above sea level), set in the spectacular tea plantations above Kandy.
It's a long drive, but you won't regret it.

It is owned by a British couple, Richard and Cary Goode, and the gardens are immaculately kept in eight acres of what used to be a colonial tea estate.

Bicycle rides, bird-watching from the balconies, tea-tasting and home cooked food make this an excellent choice for adventurous couples and the artistic crowd (Christian Louboutin, the shoe designer, stayed here last year), especially if you like painting, drawing or just gazing through your binoculars at the Alagalla mountains.

It also offers easy access to Kandy's Temple of the Tooth (containing the relic of the tooth of Buddha) and botanical gardens, 30 minutes away.
Sri Lanka has come out of the shadows of civil war and political unrest.

Last year marked the tenth anniversary of the devastating Tsunami and a new president was elected in January.  Optimism is in the air — and rightly so.

First published in the Mail on Sunday - October 2015