The one aspect that let David down was that we thought DialAFlight would notify airline at time of booking of requirement for gluten free food.

Holiday was amazing and the hotel Movenpick was great. Deborah did an amazing job in sorting out the flight for me. Just a few points . There should be a longer layover in Doha as the lounge is amazing and had barely 5 minutes to enjoy it. I only managed a shower and a bite. Also it might be easier having Qatar airways all the way rather than BA.

Excellent service and would thoroughly recommend. Dealt with Samuel and he is excellent

Shame about the airline

A happy return to Sri Lanka

English?' asks the wizened old man selling bananas on a street corner in Galle. Well, it's a safe bet. My lobster-pink face has Home Counties written all over it. Ditto my baggy shorts.

Sri Lanka is often one of England's opponents on the cricket pitch and, every few years, the Barmy Army descends on this beautiful colonial port on the south-western tip of the island.

Other foreign visitors have been more wary, not surprisingly put off by the long civil war, which concluded in 2009. And the 2004 tsunami that devastated Galle was shocking. But better times have arrived.

The country is once again very accessible, with a range of airlines offering great fares, and visitors taking an early opportunity to visit have discovered one of the world's most beautiful islands, a lush landscape topped by densely wooded mountains ringed by white sandy beaches.

Probably the first thing that strikes you is the sheer richness of the vegetation. In rural areas, it is thrillingly green. There is hardly a bare patch of ground as fruit and flowers of every description, from mangoes to orchids, pineapples to tea roses, papayas to camellias, burst out of the soil.

There are meant to be more than 20 varieties of banana in Sri Lanka, and my stall-holder friend in Galle seems to stock most of them, judging by the rich palette of colours on display, from lurid yellow to dainty pink. I buy one of the smaller ones and, as I sink my teeth into the sweet flesh, let out a little purr of pleasure.

'Good?' he asks with a gap-toothed grin. 'Magnificent,' I reply. 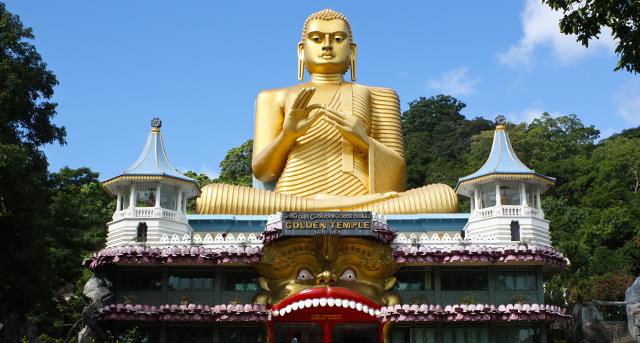 The Golden Temple of Dambulla, the best-preserved cave temple complex in Sri Lanka

Galle, 75 miles from the capital of Colombo, was colonised by the Dutch and the old Dutch fort that dominates the town is now a lovingly maintained conservation area.

The ghosts of the past are all around as you stroll through the narrow streets past 18th-century churches, dusty libraries and gnarled old banyan trees that look as if they have been there since the dawn of time.

Its cricket ground, the Galle International Stadium, is considered to be one of the most picturesque in the world. It was severely damaged by the tsunami but was rebuilt - with considerable funding from Melbourne, Australia - and test matches resumed there in 2007.

A cat sleeps under a white Morris Minor parked outside a tea shop. A faded sign promises 'Elocution lessons for age 4 to 15'. A boy scurries past with a cricket bat, his face aglow with excitement. A sea breeze gusts the tablecloths of a restaurant promising 'finest curries' and '99 per cent approval rating'.

If Galle is a hive of activity, with its plethora of shops and cafes, the Fortress Hotel, ten miles along the coast, is a haven of luxurious calm. The only sound is the waves pounding the beach and the wind rustling the tops of the palm trees that soar high above the swimming-pool, bent at crazy angles.

Honeymooners loll in hammocks scented by hibiscus or sip cocktails in the purpling twilight. It is a magical spot.

Meanwhile, the capital, Colombo, is a vibrant modern city. We pound the streets, soak up the atmosphere and pig out at the Ministry Of Crab, a hip new seafood restaurant co-owned by two Sri Lankan Test cricketers. But the mountainous interior is the real glory of Sri Lanka.

The ancient city of Kandy, fabled for its tea plantations, is exquisite, like something from a fairy tale - one minute wreathed in mist, the next lit by bright sun.

The city centre hums with life as women in brightly-coloured saris converge on the market place. Tuk-tuks career through the narrow streets. Donkeys and bullocks pull carts laden with fruit and vegetables.

Our hotel, Mahaweli Reach, overlooks a muddy river that glides off without a murmur into the dark foliage. White birds swoop through the trees. There is a smell of turmeric from the kitchen, promising a slap-up curry lunch beside the pool.

For Sri Lanka's 14-million Buddhists, Kandy is a place of pilgrimage, and the Temple Of The Sacred Tooth Relic, said to contain a tooth of the Buddha himself, is one of the most impressive buildings on the sub-continent, with its dramatic lakeside setting, dainty roofs and gilt interior. 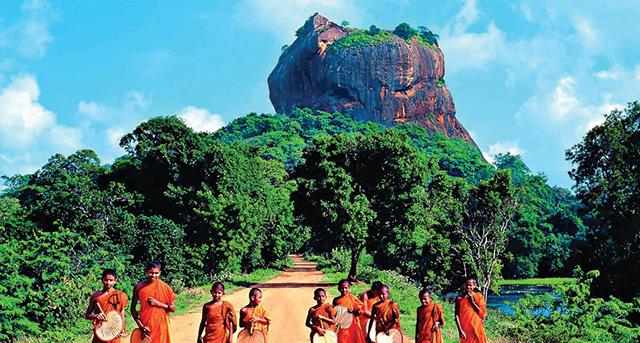 Monks in a percussion procession, with Sigiriya, or Lion Rock, behind them

Not too far from Kandy, rising above the rice fields, is Sigiriya, Sri Lanka's answer to Ayers Rock. This craggy pillar of rock, more than 660-ft high, has been a sacred site for 15 centuries.

As we slog to the top, we pass shady water gardens, deep-set caves, some racy frescoes of half-dressed women and, best of all, two enormous lion's paws, carved out of the rock.

I gape in awe. In fact, everywhere in Sri Lanka I find myself gaping and marvelling at its beauty and friendliness.