Roger was excellent. He took all the stress away and his customer care was on point. Great service and a good price.

Glen and Jack constantly available and helpful. App is very easy to navigate.

Richard got me out of a tight spot while I was in Costa Rica and saved me lots of trouble for which I am very grateful.

Liam is always amazing! So helpful, knowledgeable and makes the whole process easy. When I had to reschedule my flight at the last minute early in the morning whilst stuck at Heathrow I got exactly the help I needed. Long may our business relationship continue!

Thank you for your help throughout. It seems that all your staff are keen to help and nothing is too much trouble for them.

Very helpful and informative staff who went out of their way to provide the details I asked for.

Ryan was once again extremely helpful in helping us book this trip. We had a fantastic time and it was completely stress-free as all the admin had been taken care of.

Great service, cheaper than what I would have paid online without all the fuss of luggage allowances. Niall was extremely helpful - will use again.

Sean has been amazing since I first started talking to him.

Thank you for simplifying my journey and making it enjoyable

Oustanding once again. Many thanks to the fantastic team at DialAFlight and specially Jamie and Joe. They consistently exceed my expectations.

Matt was fantastic as always - when we realised there were no transfers he sorted with no fuss. I’ve recommended you before and will again

Thanks Tyler. Excellent customer service from start to finish!

We had an excellent 3 weeks away. Our tailormade holiday met our brief perfectly. Everything went smoothly and the choice of hotels and excursions were perfectly suited to our needs. Great job, will definitely be using DialAFlight again… and Calvin Ali.

Very happy with the customer service you provide

I always get good service with DialAFlight. Highly recommended

Everything perfect, so great you can phone and somebody answers straight away. Ryan and his team are great

Everything went to plan. Many thanks for organising a great trip

Great customer service and follow up after booking flights. Kept informed and would use again

As always very efficient and reliable

Excellent service as always and invaluable to have DialAFlight at the end of the phone when changes need to be made. Gives me peace of mind when travelling.

DialAFlight is the one stop shop for booking a holiday. Roy and his team sorted our holiday from beginning to end, including our pre-flight hotel, what a relief! Many thanks to you all.

From monkeys to man-eaters, Flic Everett encounters a host of exotic creatures on this balmy Central American paradise...

Costa Rica is like an I-Spy book checklist of exotic holidays; you can travel from the Caribbean coast to the Pacific, stroll on white beaches with monkeys and pelicans and zipline through mountainous cloud-forests.

But unlike some of its wilder neighbours, the water is filtered, the hotels are chic, crime is low and the food is healthy, with a heavy focus on meat, rice and black beans.

My trip began at El Mangroove, a sophisticated boutique hotel on a beach on the Gulf of Papagayo on the north-east coast near the border with Nicaragua. There were howler monkeys in the trees, and cocktails at the bar. 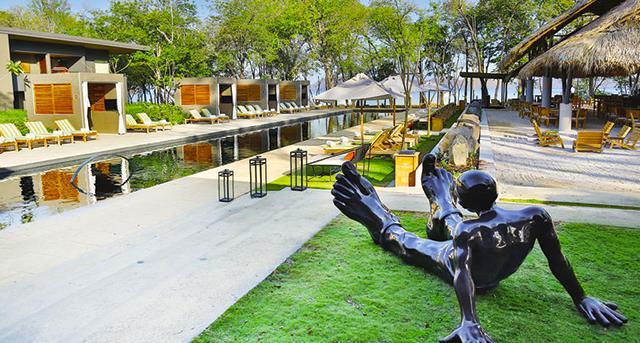 The quirky Boutique El Mangroove hotel on the Gulf of Papagayo

It's not far from the Arenal volcano, a natural wonder that looks like a child's drawing. The shape of an incense cone, it sits reflected in Arenal lake, a manmade bowl of water fringed with vine-looped trees.

Luckily it hasn't erupted since 2005, though it still feeds hot springs all around the area. At the Tabacon hot springs complex, it emerged that 'hot' meant 'skinsearingly boiling'. There are more than 20 pools and waterfalls in the black volcanic rock, among tropical plants and flowers.

In one pool, an elderly couple stood blissfully beneath the waterfall, while others floated in glassy jetblack ponds amid floating clouds of steam as evening fell.

I found my own little pool, and lay back with my eyes closed for so long that I opened them to find myself facing a pair of orange Crocs worn by a concerned Texan man who was clearly wondering if I was dead. If I was, it was a good way to go.

That night, I stayed at the Arenal Springs hotel, a Spanish-style resort featuring rows of neat bungalows, like a tropical version of The Truman Show. I was worried that my Spanish doesn't extend beyond 'vino por favor', but almost everyone speaks English in the country's resorts, used as they are to vacationing Americans. 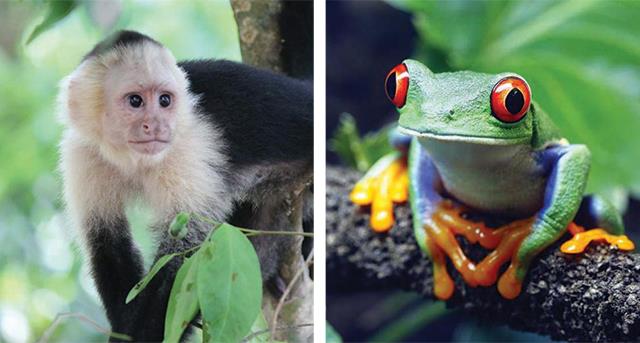 Be amazed by the variety of exotic creatures

Costa Rica's main draw for me, though, was the wildlife. Already, I'd seen citrus-peel-bright butterflies, vultures circling over the Pan-American highway, and a clutch of hefty iguanas slowly blinking the day away in a tree.

But a cruise down the San Carlos river made all that look like a palatecleanser. As the boat set out across the still, peat-brown water, vines and foliage hanging from the banks, a cayman lay immobile on the sand, watching us with eyes golden as chocolate money.

There were basilisk lizards the searing green of primary-school poster paint, mangrove swallows following the boat, and - high up in the branches - a sloth, dangling upside down.

We saw capuchin monkeys with faces like cross old men and birdlife to make any twitcher weep - a fluffy Great Potoo, Amazon kingfishers and boat-billed herons perched on bleached branches. 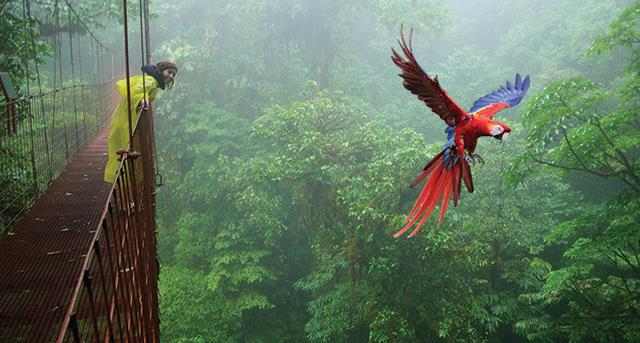 The following day, we headed uphill to Monteverde, a small town in the mountainous north west. It's more than 5,000ft above sea level and wreathed in misty cloud. And when we arrived, it was raining biblically. It's a town for backpackers and adventurers, strung with telegraph wires and lit by the fog lamps of Isuzu trucks.

I found the thin, humid air hard to breathe, and though our hotel, El Establo, was smart and pleasant, I was relieved to get into the cooler cloud forest the next day, where Selvatura Park offers ziplining through the trees (I feebly declined), a beautiful butterfly house, a hummingbird garden, and a walk along eight astonishing hanging bridges (I said yes to all three).

In the hummingbird garden, the tiny birds whirred frantically around feeders filled with sugar water. Flashing emerald, royal purple and scarlet, and so tame they'll perch on your finger, it was like holding a tiny portable fan, and one of the best experiences of the trip - particularly when a coatimundi emerged and snuffled through the flowers. 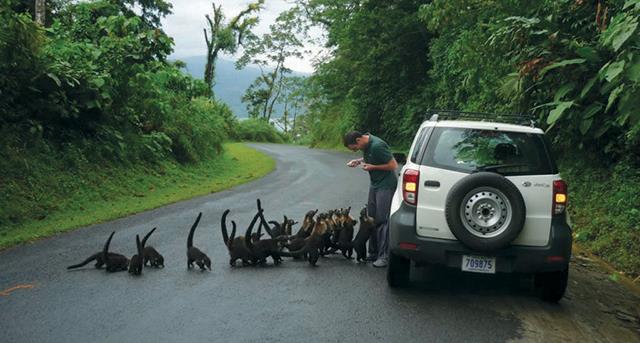 The hanging bridges are where parts of the Paddington movie were filmed. There was no sign of Aunt Lucy, but we did hear howler monkeys barking in the trees like a pack of junkyard dogs, and trip over a millipede the size of an inner tube.

After that, riding a horse through the Santa Rosa National Park amid clouds of yellow butterflies, and visiting the Monteverde coffee plantation belonging to flirtatious 78-year-old Don Juan ('He has a much younger wife,' said our guide) were added bonuses.

We finished the trip at Dreams Las Mareas, above Salinas Bay and close to Nicaragua. Newly built, with swim-up terraces by the rooms, and a series of high-end restaurants, this is luxury the American way with every whim catered for.

I'll admit I preferred the wild side, where vultures hover over houses the colour of Skittles sweets, monkeys hurl themselves through the vines, and a kaleidoscope of tropical birds whirls among the soursop trees of the rainforest, high above the clouds.