Roger was excellent. He took all the stress away and his customer care was on point. Great service and a good price.

Glen and Jack constantly available and helpful. App is very easy to navigate.

Richard got me out of a tight spot while I was in Costa Rica and saved me lots of trouble for which I am very grateful.

Liam is always amazing! So helpful, knowledgeable and makes the whole process easy. When I had to reschedule my flight at the last minute early in the morning whilst stuck at Heathrow I got exactly the help I needed. Long may our business relationship continue!

Thank you for your help throughout. It seems that all your staff are keen to help and nothing is too much trouble for them.

Very helpful and informative staff who went out of their way to provide the details I asked for.

Ryan was once again extremely helpful in helping us book this trip. We had a fantastic time and it was completely stress-free as all the admin had been taken care of.

Great service, cheaper than what I would have paid online without all the fuss of luggage allowances. Niall was extremely helpful - will use again.

Sean has been amazing since I first started talking to him.

Thank you for simplifying my journey and making it enjoyable

Oustanding once again. Many thanks to the fantastic team at DialAFlight and specially Jamie and Joe. They consistently exceed my expectations.

Matt was fantastic as always - when we realised there were no transfers he sorted with no fuss. I’ve recommended you before and will again

Thanks Tyler. Excellent customer service from start to finish!

We had an excellent 3 weeks away. Our tailormade holiday met our brief perfectly. Everything went smoothly and the choice of hotels and excursions were perfectly suited to our needs. Great job, will definitely be using DialAFlight again… and Calvin Ali.

Very happy with the customer service you provide

I always get good service with DialAFlight. Highly recommended

Everything perfect, so great you can phone and somebody answers straight away. Ryan and his team are great

Everything went to plan. Many thanks for organising a great trip

Great customer service and follow up after booking flights. Kept informed and would use again

As always very efficient and reliable

Excellent service as always and invaluable to have DialAFlight at the end of the phone when changes need to be made. Gives me peace of mind when travelling.

DialAFlight is the one stop shop for booking a holiday. Roy and his team sorted our holiday from beginning to end, including our pre-flight hotel, what a relief! Many thanks to you all.

Fantastic customer care. Great that we can always get straight through to you on the phone. Will definitely use you again and will recommend you to our friends.

Creatures of every kind. Volcanoes. Glorious beaches. Welcoming people. Mark Palmer reports from the country that has the lot.

She keeps popping into my head. No doubt teenage eco-warrior Greta Thunberg would approve wholeheartedly of Costa Rica's much-heralded efforts to look after its outstanding natural beauty.

But you just wish Greta would smile more, despair less and have some unadulterated fun.

Thank goodness the five-million people in this spectacular country - with Nicaragua to the north, Panama to the south - smile a lot and have fun. Ticos, as Costa Ricans are called, are gentle, welcoming and wear their eco-credentials lightly.

Almost three million people visit every year, with Britons at the forefront. 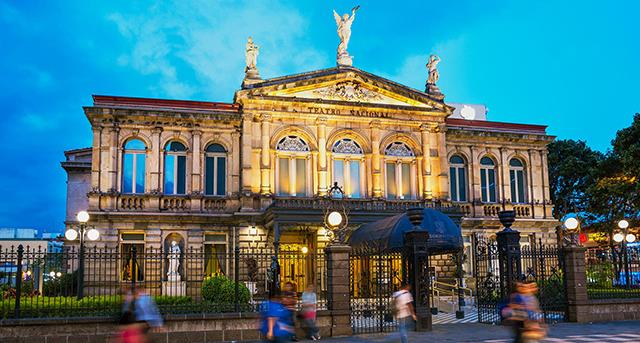 Standing proud in the capital San Jose, the National Theatre evokes memories of a colonial era

Despite its small size (roughly similar to Denmark), Costa Rica possesses more than five per cent of the world's total biodiversity, and its disbanding of its army in 1948 means huge financial resources have been ploughed into education, resulting in a literacy rate way above the Central America average.

We flit back and forth between the two coasts and experience ferocious but exhilarating downpours, plenty of clear skies, high humidity and temperatures around 28 degrees.

In the capital San Jose we stay our first night at Grano De Oro, a colonial-style hotel. 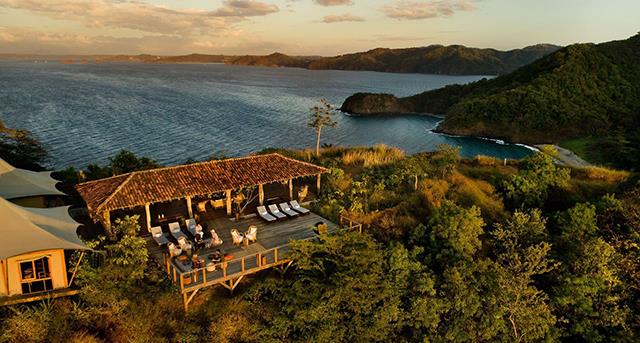 Next day we head in our rental car west to the Papagayo Gulf, where Moroccan/French entrepreneur Mehdi Rheljari has opened a five-room eco-lodge called Kasiiya -  one of the most exceptional projects I've ever seen, mainly because you might never know it's there.

Such is the minimal footprint of the tented suites that it's howler monkeys who have more of a presence. The young staff are totally committed to Mehdi's vision. A shaman-type character operates from a treehouse spa; barefoot Bruno, originally from Berlin, offers 'movement sessions' (some of which involve taking your cue from animals); and naturalist Manfred leads hikes pointing out the wildlife (with a tear in his eye when an osprey does a fly-past). 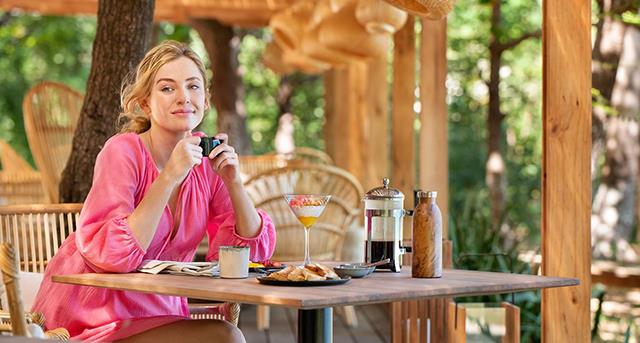 Even with Satnav our next drive, south to Santa Teresa, is a challenge on roads sometimes bumpy, sometimes with giant craters.

Perfectly positioned Hotel Nantipa has been open less than a year. Its modern design (teak wood and huge sliding glass doors) is in stark contrast to Santa Teresa's hostels, shacks and yoga retreats.Mel Gibson has a place in town; so does supermodel Gisele Bundchen.

David Cameron has spent Christmas near here, as has Canadian PM Justin Trudeau .

I'm not a surfer, but if I were this must be one of the greatest places to practise one's 'aerials' and 'backsides'. A two-day stay was far too short, but we headed next for Tortuguero National Park and sloths, iguanas, crocodiles, killer frogs and snakes.

We break our journey in La Fortuna and stay one night at the highly-recommended Amor Arenal. A nearby farm has its own nature reserve, concentrating on sloths. By definition they don't do much, spending hours wrapped around a tree branch.

The main access point to Tortuguero National Park is some four hours away, in La Pavona. Included in the rate at Tortuga Lodge is one morning and one afternoon safari.

Our final destination is Puerto Viejo in the far south-east. It's a colourful, buzzy little town where Jamaicans settled some 100 years ago. They came to Costa Rica to build the railways - and never left.

It's ramshackle but with a growing number of chi-chi shops, bars and restaurants.

We stay just off the main drag at a delightful little place called Aguas Claras, handy for the beach.

'We've left the best until last,' I tell Joanna as we head for supper at a restaurant packed with locals. Puerto Viejo is a glorious fusion of Central American and Caribbean cultures - and reason enough to return to this gentle and engaging country.