What 1829 DialAFlight clients thought of Canada

Bill and colleagues are superstars - fast to respond and always get it right.

As usual the team at DialAFlight were fantastic! I had to change my return flight and they were amazing. I will definitely book with them again very soon.

It took over two years to get to Canada. Your company helped me many times to rebook and the service was 100 percent. I will be using you next year on my return trip. Thanks to Raj and colleagues .

I used your services for the first time this year and will be using you in the future. I can highly recommend.

Massive thanks to Cody for organising my 10 week, once in a lifetime honeymoon. He made it so easy and without him putting in so much effort it wouldn't have been anywhere near as good as it was. I have been using DAF for over 10 yrs and will continue to use them for the next 10!

Neil was incredible! He made our travel 100% easier. Would recommend him to anyone looking to book travel.

Our ‘go to’ agent

As ever Jarvis and his colleagues were very helpful and supportive. Much appreciated.

As always, friendly, efficient and a PERSON answers the phone.

As usual Stuart was great

Be aware - arrivals into Heathrow ( past 7pm) have no transportation to hotels unless they have a voucher from BA - we were unaware of this. Left on for an hour waiting for bus to take us to arrivals - no staff support, attempted train - not in action. Ended up queuing for a taxi - took us over 3 hrs from landing to get to a Heathrow hotel!

Excellent service from Bruce and the team as always.

Very big thank you to Rudy who went overboard for my family - it was a pleasure to have him as my agent. Best customer service

Thank you for your outstanding responsiveness and help when I needed it - filling out Covid requirement forms for me when I was unable to submit them from abroad.

Once again, flawless. Speedy delivery of all we needed. Many thanks

As always superb support and hassle free booking and travel.

Manny was fantastic and I will use him and recommend him again.

Jessica (and team) were amazing from day 1. Understood my requirements perfectly, she was adaptable when I needed to make changes and generally went above and beyond in delivering fantastic service. I have used DialAFlight in the past and would continue to use them especially for long distance flights.

Always friendly and helpful with any issue. I really can’t find a better price and I always check with them. Very personalised service and so reassuring to have their insight when travelling in these tricky time.

I would rate you as 5 +++. Over the past few years I have been so lucky to be taken care of by Dennis and Stan - very kind and efficient people who have dealt so well with all the cancellations and problems due to Covid. I appreciate their style of working

Theo is the best!

As soon as Donald Trump became President, the number of Americans applying to move to Canada went through the roof. And Brexit has even made many Britons think about heading for ‘The Great White North’.

But where in this vast country should you go? I’ve the answer – although I’m biased as my wife is from Ontario and I have travelled extensively through the province and fallen in love with it.

It's enormous (half a million square miles) and home to 40 per cent of Canadians. You need to base yourself in Toronto which, to the average Trump supporter, would be hell on Earth - it has three million inhabitants and more than 160 languages.

The city has changed a lot since I first visited in the mid-1990s. Lots of shiny new apartment blocks have been added to the downtown skyline of the CN Tower and the glorious Gothic Revival of the Royal York Hotel.

But the plus side is that the Lakeshore area is now properly utilised and full of things to do all year round. It’s also where you can pick up a ferry and take the ten-minute ride over to Centre Island. 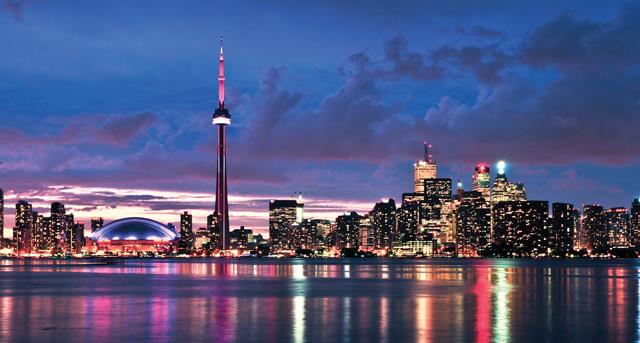 Toronto's skyline is up there with the finest

Toronto’s offshore City Park is ideal for a family day-trip. On the way back, you could pop into the magnificent Roger’s Centre and catch a baseball game. The Toronto Blue Jays are the only Canadian team in Major League Baseball and they're pretty good. Nothing gives a bigger hit of ‘North Americana’ than a ball game, with the wise-cracks of the hot-dog sellers, antics of the energetic furry mascots and maybe even the game itself.

Toronto is a city of villages - discover them on foot. Have breakfast at the Thompson Diner, check out Kensington Market to funk up your wardrobe, visit Chinatown for lunch at Lee Garden.

Come the weekend, Canadians go ‘up North’ to reconnect with their pioneer roots…and drink beer. Most people have a ‘cottage’ somewhere on one of the 30,000 lakes, ranging from a simple hut to vast affairs with helipads and boathouses.

We head for the Muskoka Lakes. Three vast lakes – Muskoka, Rosseau and Joseph – are dotted with hundreds of little wooded islands and connected by locks to form the ultimate summer playground (they freeze over in winter which is pretty fun, too).

If we are going for a short time we stay at the Red Leaves Resort on Rosseau. When we rent a cottage we also get a speedboat and life is spent almost permanently on the water. 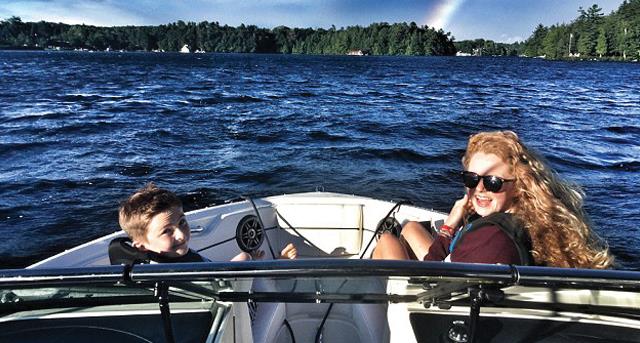 We were having a meal with friends in Toronto when they insisted we go to stay in their cottage on Christian Island, on Georgian Bay. They said it was always unlocked and that the water was the clearest in Canada.

We took the rickety passenger ferry over and drove the short distance on a dirt track to Horseshoe Bay. We came to several rows of cottages nestled among birch trees. We found ours and dragged in everything we needed for our stay. It was compact, but incredibly sweet.

The beach was a two-minute walk away, and over the next few days we swam, paddle-boarded, ate simply but well and slept like kings. Life was good.

On the fourth day, we were eating brunch on the deck when a car turned into the driveway. Assuming neighbours were calling in to say hello we waved vigorously. The family exiting the car appeared very confused. They wondered what we were doing in their cottage!

We were in the wrong one. They were all left unlocked and we’d made a stupid mistake. We were mortified. They, being Canadians, were more upset at having to turf us out, although we explained we really did have the correct cottage somewhere nearby in which to stay.

It was so gloriously Canadian. These are good people, possibly the best in the world. We had to almost force our way out of their cottage. And our new friends lined up to wave us goodbye.

We can learn much from this wonderful country. For Trump, Brexit, anything really, there is a solution. Canada – it truly rocks.

Experience one of the world’s most awe-inspiring rail journeys

Experience one of the world’s most awe-inspiring rail journeys