What 427 DialAFlight clients thought of Vietnam

Everything went as planned

I think you have covered all the bases, great holiday, great customer service

Just across the road from my luxury beach resort I spotted a little track leading off into the countryside between some big clumps of bamboo.

So, one morning, just as the sun was rising over the South China Sea, I set off to explore. I left behind the base for my holiday in Vietnam: the extremely comfortable new five-star Nam Hai Resort. This glamorous Four Seasons beachfront hotel is a solid example of the 'new Vietnam' - a prosperous, modern and forward-looking country which has succeeded in putting the terrible dark days of war well  behind it. 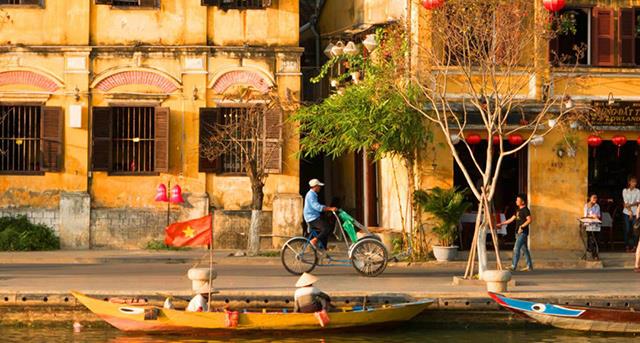 The town's harbour is a popular attraction

But on the other side of the busy highway, I discovered that there was another type of Vietnam… a charming, exotic and fascinating place that makes it one of today's most sought-after destinations.

I rode my hotel bike past water buffalo and storks in rice paddy fields alongside farmers working away thigh-deep in water. I pedalled through a series of ramshackle villages, where I saw huge cargoes of coconuts being transported balanced on mopeds and fishermen throwing their nets into the waterways right outside their homes.

Amid the lush vegetation that was teeming with wildlife, I stumbled upon brightly coloured homemade shrines, where families make quirky offerings to dead ancestors - strange gifts for dead aunties and uncles, such as half finished packets of biscuits or empty drink cans. 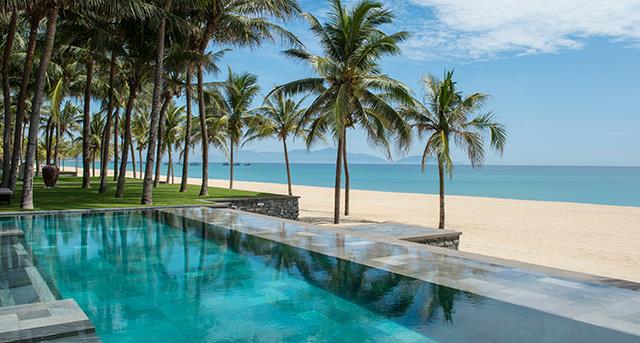 Later, back on the other side of the road, at the Nam Hai Resort, I could relax after my eye-boggling bike ride. It felt as if I had returned to a quite different world. An immaculately turned out waiter brought me a chilled coconut drink on a silver tray.

The Nam Hai is a sensational resort, with spa treatment rooms spread across a lake and 100 private villas under palm trees along the beach. Many villas have the luxury of their own pools but the three-tier central infinity pool at the heart of the resort means that nobody could feel short-changed. Beach lovers will also not be disappointed with a beach named by Forbes as one of the best in the world.

Staying in Nam Hai completely banishes any lingering out-of-date image of Vietnamese holidays: that it's a place for intrepid backpackers happy to rough it. For example, I took a hotel tour to the enormous citadel at Hue. I was given an English-speaking guide and we visited the emperor's palaces, fortifications and temples inside the vast walled city. 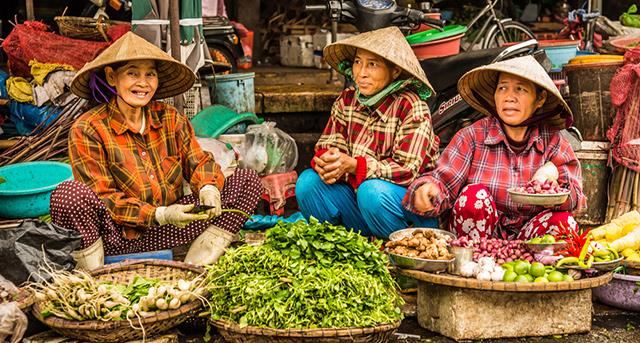 Smiling welcome: A trio of local traders pictured in central Hoi An

The Nam Hai is set about halfway up the coast, a perfect location for visiting three of the country's top attractions: Imperial Hue, the temples of My Son in the rainforest and the harbour town of Hoi An. It is also a short drive from the waterfront metropolis of Da Nang, the beautiful vivid green Annamite Mountains and the grottos, caves and temples of the Marble Mountains.

And if that lot doesn't comprise a sufficiently diverse range of attractions, the resort stands right on the fabulous, spectacular Ha My beach. This is a world-class strip of clean white sand that runs for 30 miles around the bay. Ha My is so long I always seemed to have about half a mile of beach entirely to myself.

On the last night of my stay at the resort, I wanted to savour one last magical Vietnamese experience. I decided that I would go for a late swim on Ha My beach, with the waves lapping just a few steps in front of my private villa. I rushed through the palm trees, across the warm sand and into the gentle surf. The sea was 29°C - as warm as a bath. 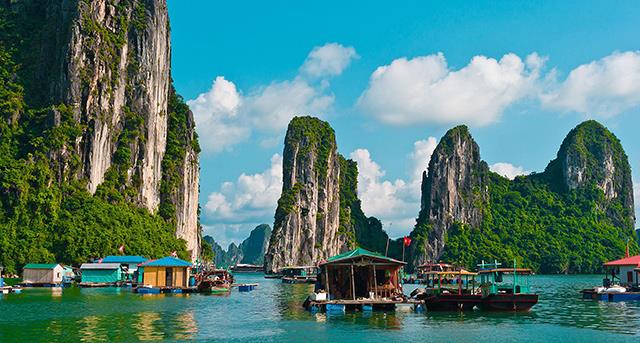 Look out for floating house boats in Halong Bay

The sunset was turning the sky orange behind the distant jagged mountains along the western horizon. The light was rapidly fading and, quite a way out to sea, hundreds of flickering lights marked the lanterns of junk-like fishing boats bobbing in the waves. It was one of the most magical moments of my entire trip to this captivating destination.