What 183 DialAFlight clients thought of Grenada

Sandals LaSource in Grenada packs a punch - and it's not just the rum, as Tamara Hinson discovers

Walking around Sandals LaSource is a strange experience. It’s not just the staff who are incredibly friendly, but guests, too. If I were to knock on my neighbours’ door and ask them to fetch me a mojito, I know they’d happily oblige. A spare toothbrush? Coming right up.

Everyone at this newly-opened Grenadian extravaganza seems blissfully, deliriously happy - from the British couple who excitedly tell me this is the tenth Sandals resort they’ve visited, to the young, amorous Americans slurping neon cocktails, who want to know all about the village in Hampshire where I was born.

So my initial exploration of the 17-acre site becomes a lengthy process.

Sandals LaSource is a new addition to this lovely spot, a country which includes the main 120 square mile island and the smaller islands of Carriacou and Petite Martinique.

It’s adults-only (no under-18s), and one of 15 Sandals resorts dotted around the Caribbean. 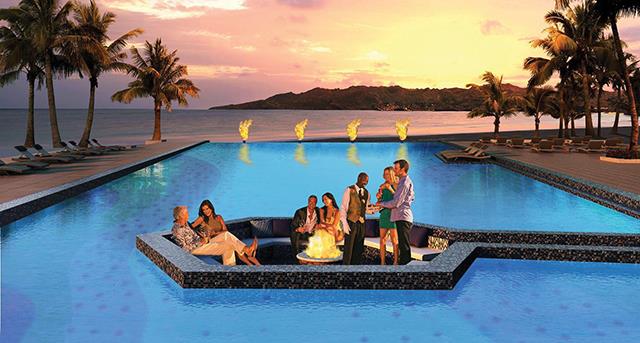 Grenada is a ten-hour flight from London and the resort is a five-minute drive from the airport, on the south-western tip of the island, specifically a beautiful stretch of sand known as Pink Gin beach. For this reason, I’ve packed my ear plugs, but not once do I hear an aircraft.

There are 225 rooms and suites. Some have pools on the balconies, and there are butler suites. Guests are given mobile phones with which they can contact their butlers.

I might not have a suite, but I’m hardly roughing it. My room, in the seafront Italian Village area, has a marble bathtub on the balcony.

Waterskiing, kayaking, snorkelling and scuba trips all come gratis, and, for a small charge, there are excursions outside the resort.

I opt for river tubing and spend the day floating lazily along a river lined by thick, jungle-like foliage, my progress impeded only by clusters of rocks. With a quick shove from our guides, we pop free like corks.

Halfway along, we enter a deep lagoon and jump off a ledge into the clear water.

On the way back to the resort, we stop by Grand Anse beach, near the capital of St George’s. Although one of the island’s most beautiful beaches, it’s surprisingly quiet, with just a few locals occupying the deckchairs.

We have a quick look around the knick-knack-filled stalls then head to St George’s itself, home to the cruise ship terminal and a souvenir-filled shopping centre clearly aimed at passengers on a mad dash ashore.

The spice market in St George’s Square is a fragrant alternative, and the piles of nutmeg, cloves and lemongrass remind us why Grenada is known as the spice island.

The next day I opt for an island tour. One of Grenada’s darker periods was the coup-within-a-coup which resulted in the killing of Prime Minister Maurice Bishop on October 19, 1983. We visit the fort where he died. Bishop was executed by the People’s Revolutionary Army of Grenada, led by General Hudson Austin.

On October 25, U.S. marines invaded on the orders of President Reagan. As we now know, he had to use all his charm to appease Mrs Thatcher, who, despite Grenada being part of the Commonwealth, was kept in the dark about the operation.

U.S. forces took control of the island within three days. Austin was arrested and an Interim Advisory Council reinstated the 1974 constitution. Elections were held in 1984 and Herbert A. Blaize became Grenada’s new PM.

Bullet holes pockmarking the walls of Fort George are the only chilling reminder of this era.

Sandals is brilliant for people-watching because of its diverse clientele. Some of the most interesting evenings are spent in the open-plan Living Room bar with its dance floor and themed music nights. 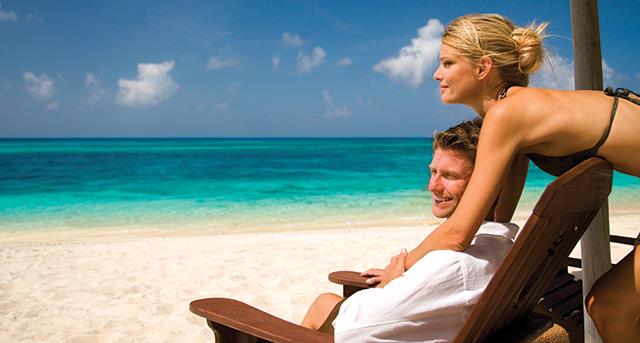 Sandals is the ideal romantic retreat

A guest tells me that Sandals resorts bring out the romantic side in everyone, whether they’re 18 or 80, but I can’t help thinking that the free alcohol also plays a part.

Sandals guests refer to staff members as if they were old friends. The more hardcore fans wear their Sandals T-shirts like badges of honour.

There are nine restaurants. I develop a penchant for eggs benedict at Le Jardinier, where I appear to be the only person not chasing down my breakfast with champagne.

In the afternoons, I offset the threat of obesity by visiting the gym (Sandals guests party hard, but they work out hard too).

When I’m feeling less energetic, I sign up for a round of bocce ball (an Italian boules-type game) and play board games at the swim-up bar.

On my final day, I head to Le Jardinier  - and toast Sandals LaSource with a pre-9am glass of champers.