What 359 DialAFlight clients thought of Kenya

As first time user of DialAFlight everything worked very well.

I wouldn’t book flights with anyone else. Rupert always responds straight away and is there for any problems. I’ve recommended to many people.

Libby McGarry was wonderful. Efficient, friendly, knowledgeable. Nothing was too much trouble. She is a credit to your company.

Good customer service, will use again and again.

We use DialAFlight for purchase of long haul flights and trust their service and expertise.

Andrew Akoo, in my view consistently demonstrates and highlights what excellent customer service should and looks like! I always use Dial a Flight!

I am always recommending you to my friends and clients too. You have never let me down and it is so good to be able to speak to someone if there are problems - not just online where there is no help

Brilliant, always recommend to others.

I was very happy because I called for some help and was answered as soon as possible. I enjoyed the flight going and coming back.

You have always organised our trip very well.

Boris was amazing - thank you all of the team

Troy was absolutely brilliant. Made everything smooth and easy. Really happy with the service and you will always be my number One choice.

Joey and Marco were very professional - all at DialAFlight work as a team.

First rate as ever!

Amy was very helpful - thank you

Minor issue. Could have had an email re return flights given KQ pilots went on strike.

An amazing travel company which despite being clearly very busy still manage to provide the personal touch. We were due to fly back with Kenyan Airlines when they went on strike, at which point we were contacted by George who was ready to do whatever was necessary to help and support us. That is being customer focused at the highest level. The documentation, along with their timely and efficient communication was second to none. A thoroughly decent group of people to do business with. I cannot recommend them highly enough.

Excellent service - will only use you from now on.

Bar an issue with us not getting a visa for our flight, Sebastian was fantastic, he kept in contact with us all the way and from the very initial contact, he was great

Book all my trips with DialAFlight. Helpful, knowledgeable and flexible

As always, DialAFlight were amazing. Tara in particular went above and beyond to help us get to where we needed for a good price.

Really appreciated the call from Harry just a few days before our departure.

Following in the footsteps of royals, Jane Bussmann heads for Treetops and marvels at Kenya's wonderful wildlife

When his daughter stepped on to a plane to Kenya and waved goodbye, the King was too British to tell her he was dying.

The film The Crown takes us back to 1952, when 25-year-old Princess Elizabeth was asked to carry out a Commonwealth tour with Prince Philip for the ailing George VI. She escaped Buckingham Palace for Treetops, a rustic treehouse in the Aberdare forest of Kenya.

Her stay had its dramas, with wild animals sometimes on the rampage below her room and the Princess filmed it, agape at waterbuck goring a rival to death and rhino charging each other. 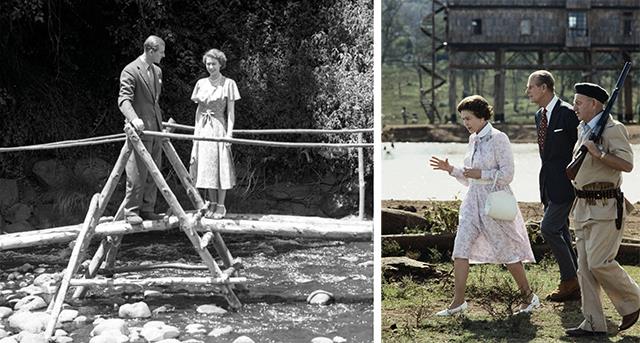 When Elizabeth was told it was time to come in for tea, she asked to take it on the balcony, saying: 'I don't want to miss one moment of this.' The next morning, she said she'd had such a good time in Kenya that she couldn't wait for her father to visit. In The Crown, she is seen writing a letter to the King requesting that she and Philip live in Cyprus like a normal husband and wife. Then Palace aides track her down to her remote location to tell her that the King has died and that she was now Queen.

Personally I'd have stayed in the tree-house and pulled up the ladder with me.

I  set out in the couple's footsteps. Kenya's safari parks still bring British visitors the same blast of friendliness and fresh air, and floating above the green Aberdare, Treetops still looks like a giant bird hide on stilts.

The original shack was commissioned by war hero Eric Walker, who had it built to satisfy his aristocratic wife's desire to have a treehouse like Peter Pan's hideout.

The original treehouse was burned down during the Mau Mau crisis in1954 and the present version has showers and a ramp. But it is very much a tree-house; my gin rested on a giant twig thrusting through the bar's polished wooden floor. 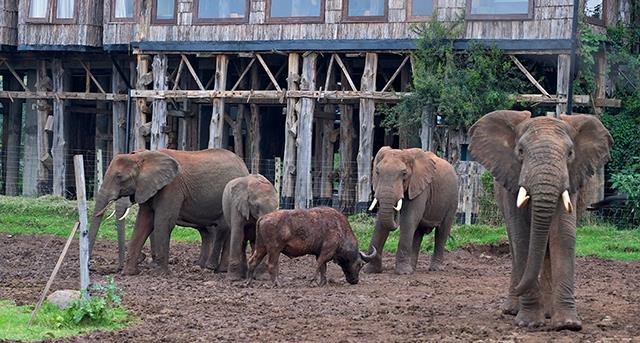 Elephants gather at the waterhole in front of Treetops

It floats above a watering hole - directly below my room. As the sun dropped, I was unpacking when I saw grey shapes just a few feet below. Dozens of elephants were in a row, drinking. The mums were hiding a baby elephant so small it could probably ride in my car.

As I ran downstairs to get even closer, I passed a huge skull. An elderly regular who died last year, said a guide -  it's not impossible he was one of the youngsters putting on a show for the Queen all those years ago.

'When he died the other elephants came to mourn,' the guide said.

'Elephants always do. If they're his relatives, they stand facing away from him, their backs just touching him. For half an hour they stand in silence, then they leave.'

We saw buffalo, warthogs, giant forest hogs and colobus monkeys. The baboons, I suspect, were barred from the animals' pub, so they broke in through the fence.

Amos Ndegwa, 64, is a seasoned Treetops guide, carrying a 100-year-old Winchester rifle that guarded the Queen in 1952. He took us up hills with runways of bare red earth from the top to the bottom. 'The elephants make the tracks,' said Amos. 'They like to sit on their backside and slide down for fun.'

After Treetops, we headed south to Nairobi. At the five-star Sarova Stanley hotel, there's a photo of the Queen and Philip's lunch there with the white-glove set.

The Stanley is named after the man who tracked down explorer Dr Livingstone. Ernest Hemingway sat where I sat in the Stanley's Thorn Tree cafe, writing The Snows Of Kilimanjaro. 'I never knew of a morning in Africa when I woke up that I was not happy,' he also wrote.

I spent Sunday at Ngong racecourse, where Princess Anne once came to watch the turf fly. Princess Margaret was another Royal to visit this area and she headed for the anything-goes Kenyan coastal town of Mombasa. 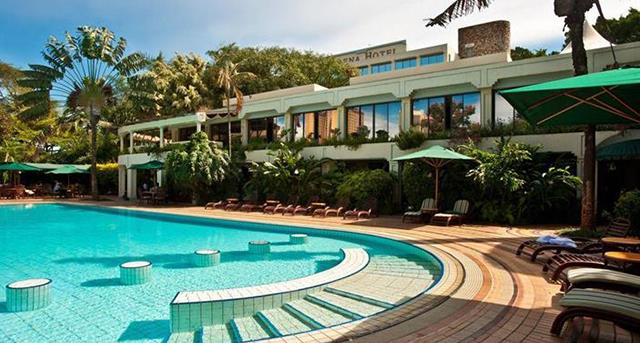 I did too and stayed at the Serena Beach hotel, with its fabulous lobby where Moorish chandeliers refract the sun under a sweeping 25ft ceiling. On the beach, blue lizards sunbathed.

We dined in the Jahazi Grill, listening to the night animals. The following day I walked along the beach to watch seabirds and enjoy a drink in the Moonshine bar. I had a daiquiri served in a pineapple. The Dawa (the Swahili word for medicine) featured local honey with vodka.

On my last day I woke to the dawn chorus. It starts in the haze with birds, then other animals join in until it's a wall of sound. I was right back in the animal kingdom.