Based on 10716 reviews on Trustpilot

Mason Edwards was excellent. He worked hard to make sure our holiday was up to scratch and it certainly was. Couldn't ask for a better holiday.

The only negative feedback would be the area that Stay Pineapple Hotel in San Francisco is located. It is just on the edge of a very dodgy part of town with a lot of homeless people there now. The hotel doesn't offer much in the way of breakfast and the bar is now closed. Everything else was great and we had a fantastic holiday - thank you

I cannot recommend DialAFlight enough - in particular Ivor Savage. He has been incredible. Amazing communication, easily contactable and he helped me out significantly when I encountered an issue on holiday. I’m so thankful to have experienced this company!

Everything went very smoothly - thanks to Ed and his team.

I have used your services many times before and the service this time was excellent as usual.

Dylan and Dialaflight, were really easy to work with. Dylan especially, was approachable, professional and worked hard to understand my requirements and get me a great package. Brilliant.

Sadie is a star! We had a great trip and would like to thank her for being so helpful and efficient

Connie gave me a first class customer service, thank you

Air France fantastic. Only gripes revolved around Delta charging us extra for an internal flight and the very different landscape revolving around Uber. Chances of securing a car when you need it not as secure as it once was. Many thanks again to Niall who always retains his sense of humour and goes that extra mile. Will be back in touch soon

Everything went as planned, lots to be said for that

I found it confusing that United Airlines seemed to be implying it was obligatory to upload documents onto their Travel Center, whereas in fact there’s no need to (at least, not all of them) and they can be quickly shown at the airport . Conversely, even though my address in the USA had already been entered, I had to do it again at a machine in the airport. It would be helpful if you could make it clearer what one absolutely has to do. This isn’t your fault - it’s to correct the unclarity of at least the UA site).

Bill Naylor is always open, patient, and very helpful with my requests and concerns.

Smooth sailing! The car hire you arranged was excellent - no pressure sales to upgrade the package. Flights were all fine.

I thought Rupert was fantastic and dealt well with all my questions.

Approachable, helpful and knowledgeable. The team and especially Stuart really helped our booking and provided assistance real time during our holiday.

Billy is a real star

DialAFlight staff are always very helpful and take the stress out of travelling!

All went well, happy with hotels. Will use again for future trips

You booked a car hire for me at Avis San Francisco. They were terrible and dishonest. I recommend that you never use them again.

As always, great service all round. Thank you Bill and Fiona

Make sure we get calls in advance to confirm rather than us chasing.

Declan has been brilliant

I know that providing a travel service must be very difficult right now for agents. Bill Naylor is always extremely patient and helpful.

As always with DialAFlight my experience was excellent. Everything flowed from entering the airport to my flight to San Francisco. DialAFlight is the best travel agent.

This meant planning our month-long road trip was a challenge. I love adventure, my husband Paul loves luxury, and our daughters Phoebe and Dora love access to wi-fi.

Our first stop was San Francisco, where we stayed at the Fairmont - lots of luxury to relax in after the flight. Our three days in the city were busy as we checked things off our must-do list: bike ride over the Golden Gate Bridge to Sausalito and ferry back via Alcatraz; window-shopping in the arty Mission District and queuing with locals for a wonderful lunch at Tartine. 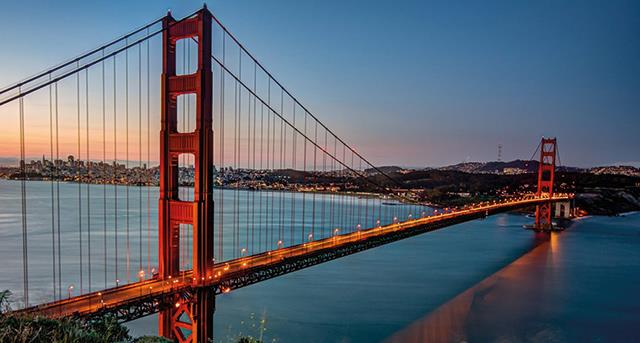 Cycle over the Golden Gate Bridge to Sausalito

As we eventually left San Francisco in our monster truck, I directed Paul to the infamous bends of Lombard Street. The girls whooped almost as much as he whinged.

Next stop was Napa Valley, where we had booked the Carneros Inn - which turned out to be one of the finds of the trip. Detached cottages are positioned around an organic farm. Cool restaurants, hilltop swimming pools, and outdoor bar areas with night-time fire pits are the only places where you notice that you are not the only guests.

We dipped in and out of Napa's famous vineyards, before heading 120 miles east to Nevada County and Grass Valley, where in the foothills of the Sierra Nevada you find the richest gold mines in California.

I find California's gold pros-pecting history fascinating, and as we traced the path down Highway 49, I tried to imagine the emotions of those tens of thousands who came to seek their fortune.

My commentary from the passenger seat was sporadically interrupted by Phoebe or Dora demanding that we stop to take photos at stunning vantage points, or capture the signs for improbably named towns such as Rough And Ready.

Our trip to Yosemite National Park was magnificent. Yosemite is definitely at its best when seen in a swimming costume at 7am from the middle of a glacial lake.

Heading west, we spent two days fascinated by the geek chic of the city of Palo Alto, where our girls worshipped at the altars of technology giants such as Apple. But before they got too used to the wi-fi forcefield that surrounded them, it was time to move to the coast. 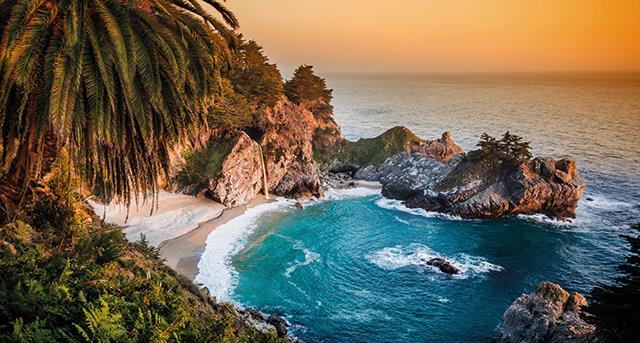 The mesmerising coastline of Big Sur is a must-see

We took a leisurely drive south to Carmel, where we had magical sunset picnics on the beach and watched whales off Point Lobos. Then it was on through the beautiful, rugged coastline of Big Sur to the El Capitan campsite near Santa Barbara. Paul was chuffed I had taken an executive decision and booked a luxury cabin.

We had a barbecue on our private terrace before witnessing the most magnificent sunset cloak the sky like a night-time rainbow - a truly special moment. 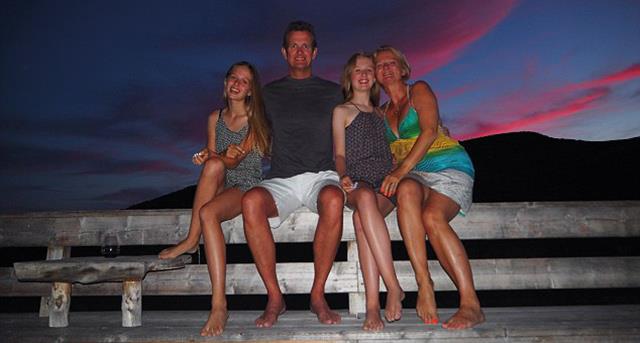 From the moment we turned on to Highway 1 the car was filled with cheers from the back every time we passed a sign counting down the distance to Hollywood. Twelve, it seems, is the age where the magic of the movie industry hits hard. My girls lap up everything Tinseltown. They loved the fact  we were hanging out in the same town as Hunger Games star Jennifer Lawrence, or that any nailbar could be full of Kardashians, or any juice bar packed with Beckhams.

We pandered to them, searching the internet to see where the stars dined, and then booked a table at the same spots.

The anticipation made for fun dinners, and rubbing shoulders with Hollywood royalty such as Di Caprio, Clooney and even a Baldwin led us to compile a list of DVDs we must see upon our return.

We stayed in full glamour at the London hotel in West Hollywood, where a sneaky afternoon cocktail by the rooftop pool became my little luxury. And of course we had to photograph the sign in the hills, visit the Chinese Theatre and sit on the Friends sofa on a Warner Bros tour, before heading back to the coast. 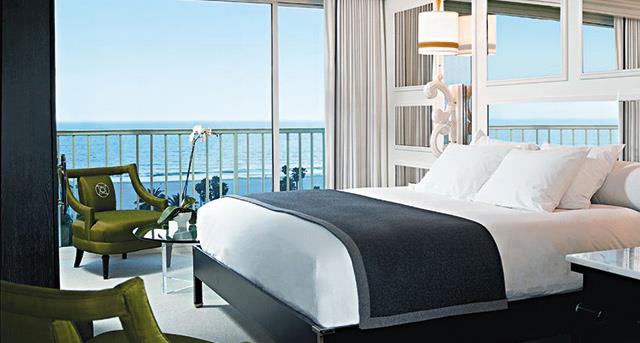 Sunny views from a room at The Viceroy

Our last five days were based at the ever-so-cool Viceroy in Santa Monica. There was much to do - trapeze school on Santa Monica Pier, a morning bike ride to Venice Beach, an evening trip to a basketball match and a surf lesson in Malibu.

We had been exactly a month in California - and both girls are determined to return as soon as possible to continue exploring.