What 410 of our customers
thought of France...

I love booking through you. You make everything so easy and stress free. We had a wonderful time with my son, his fiancee and her family. Thanks again for all your help and customer care pre, during and post booking.

As usual, Jenson did an excellent job - no stress - everything went as planned.

Neil. What a legend!

Sarah and the team are always so helpful and great at getting back to me!

Everything worked very well. The two bedroom apartment was excellent. It was quiet and comfortable with a good sized sitting room. The staff were very helpful and it was in a good location.

Excellent service - very proactive. Never had to chase them

Fantastic service as usual. Thanks Nicole

Darryl Hansford was fantastic. Incredibly efficient and helpful and we will definitely use DialAFlight again

Point of information - the railway line in Corsica runs from Ajaccio to Bastia. I would recommend booking flights to either Ajaccio or Bastia for most tourists as Figari is a longish way from anywhere much. On the plus side we did see most of the island which is stunning!

Hotel was amazing. Walking distance from old town and other tourist attractions. Very close to tram and train stations. Can’t fault in any way

A very good integrated team approach to supporting us

The only holiday company that keeps its promise and return your calls when they say they will. Definitely go the extra mile on service

Would use Matthew any time I am travelling

I dealt with Micky who delivered everything needed and with a personal touch. My son who was traveling enjoyed the no fuss flight.

Saf was so helpful. Finding a seat and sending a paper ticket for a non frequent flyer. Thank you so much

And Easyjet was on time both ways!

Great communication as usual. Thank you.

From our first contact with Jeff Lee, who at short notice, organised the perfect trip to Paris for my family (the outstanding Lancaster on the Champs Elysees, a great location for exploring Paris) to organising cars for transport to and from the hotel I could not recommend your team highly enough. However, the sign of a great agent is when things go wrong and when our flight with easyJet was cancelled at short notice to return home and following a frantic call for help he and his team swung into action and within minutes secured us a return flight home on an alternative carrier boarding the flight with 5 minutes to spare! From now on there will be just one place we will go to source our family trips

Superb from start to finish and particularly appreciated Gavin's prompt rearranging of our cancelled BA flights and help with car hire.

Great service as usual - thank you!

Excellent in all aspects - I have been using the DialAFlight services for over 15 years.

Thanks for your efficient service

Jessica is the best

Why a holiday in France's most fashionable ski resort is suddenly looking even more appealing. Rob Freeman analyses the reasons...

Sometimes those old sayings are absolutely spot-on. I'm thinking of 'it's an ill wind...' and 'every cloud has a silver lining'.

We don't wish problems on anybody...but there's no denying  that the troubles of the euro, and to a lesser extent, the Russian economy, have benefited British winter holiday fans, particularly those heading for the top French resort of Courchevel.

Courchevel is chic, ultra fashionable and at the heart of one of the most extensive and fabulous ski areas in the world, Les Trois Vallees. Now a combination of factors means this breathtaking resort, despite its pricey image, is becoming even more affordable for British holidaymakers. 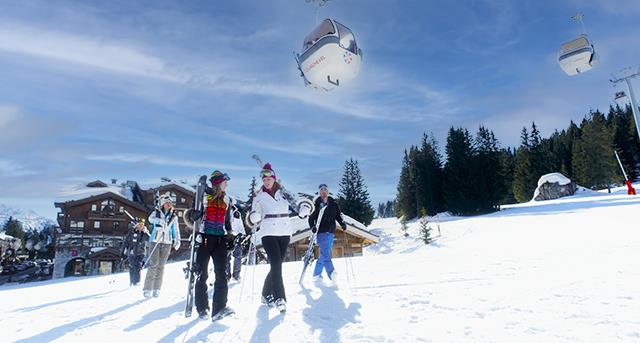 In fact, although there's no shortage of very high-end hotels and restaurants, there have always been ways of having wonderful holidays here without breaking the bank.

Britain, years ago, made the momentous decision to stay out the Euro zone - and how that resolve is paying dividends now. The pound is currently so strong against the Euro that holidaying in even a top resort such as Courchevel can be cheaper in real terms than it has been for years.

There has also been a perception that the popularity of Courchevel with free-spending Russian skiers has somewhat artificially pushed up prices, particularly during previously cheaper weeks in January, which is when the Russian New Year falls. 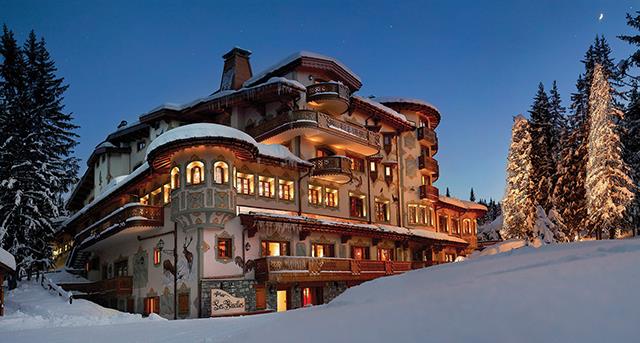 Well, guess what, the rouble has found itself in all sorts of trouble lately, hitting in particular the upward mobility of the Russian middle-class. This means that, while there's not a sudden total absence of Russian guests, many are tightening their belts and forgoing  a holiday in the Alps this year.

The belief that too many Russian visitors - with a somewhat over-hyped reputation for loud behaviour - was altering the dynamic of resorts such as Courchevel has been something of a myth anyway, certainly an exaggerated fear. One of Courchevel's great strengths has been its cosmopolitan atmosphere. It's believed that skiers and boarders from 45 countries visited last year - a united nations of snow lovers if ever there was one. It prides itself on its international ambience. 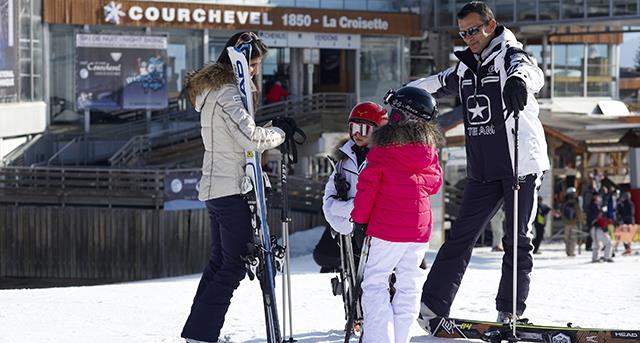 The British are the resort's most important international clients, making up 33 per cent of visitors last winter.  Russians made up little more than five per cent, and that could well decrease this year. You'll find more Russians are heading for the slopes of Sochi than Courchevel this winter.

The strong pound also means that the cost of those essential components of a ski holiday - equipment rental, ski-pass, lessons, mountain lunches and apres-ski - have taken on a more comforting look. It will also surprise many to learn that a six-day adult Three Valleys ski pass costs just two euros a day more than the equivalent Dolomiti Superski pass in Italy, usually perceived as a much cheaper country in which to ski. A Three Valleys pass covers 170 lifts and 600kms of runs. Courchevel also has eight free ski lifts easily accessible for beginners, and four free ski travelators. For under fives or over-75s, the ski pass is free. Reductions apply early and late season. 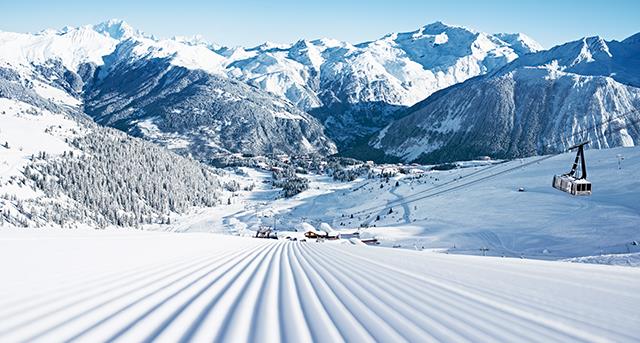 Fresh snow awaits on the slopes of Courchevel

As at any resort, you can push the boat out at lunchtime. But Courchevel also has a good range of affordable lunch spots. One that comes to mind is Le Bel Air, at the top of the Ariondaz lift, where the food is good and prices reasonable. It has a lovely sunny deck too, by the way.

Les Chenus, at 1850, serves exceptionally good burgers at sensible prices and has a plat du jour at 11 euros. And the restaurant at the top of the gondola from La Tania is also known for not ruining the holiday budget.

Incidentally, each of these are also handy for non-skiing members of the party to meet up for lunch, being accessible by lifts pedestrians can take. Le Courcheneige, on the easy Bellecôte run a little above the village, with a  stunning south facing terrace, has a plat du jour from 15 euros.

The village boasts a wide range of good value restaurants - including pizzerias, Savoyard speciality venues and creperies. And even some Michelin-starred establishments are astonishingly good value, such  as the Azimut in Courchevel Le Praz, which has a daily menu from 30 euros. This winter could be the perfect time to raise a glass in Courchevel!