You cannot improve on your excellent service. The only downside we experienced was the theft of items from one of the cases, unfortunately as we had two transfers we do not know where the theft took place.

My flight was changed by the airline, causing my allocated seats to be changed to less appropriate ones.

Could not have asked for a better service, all our requests were dealt with very quickly and promptly.

Do not rate LUFTHANSA but fortunately ended up with Singapore Airlines

Family members have been using DialAFlight for a number of years

Graham is a delight to book with giving a personal service. 5stars

Thank you Bruce for all your help, as ever

Thank you for being helpful and friendly. Much appreciated

Thanks for brilliant service. All went smoothly.

Always on hand to get good advice... never had to wait till someone answered my call

Excellent service from Nathan and thought the phone call just before we were due to go on holiday, checking everything was OK and wishing us a great holiday, was a fantastic gesture. 1st class all round service.

Excellent service and good back up. Will use for next adventure. No hesitation in recommending.

DialAFlight are very good at arranging everything for your holiday and always keep you updated with information. I have already recommended them to family and friends.

Always kept informed by email/text. Excellent service from Theo. I have recommended your company to a friend so hopefully you can help her as well as you have helped me.

Made life easy, comfortable that everything was correct

Staff so helpful and always on hand.

Always well looked after by Craig. We have recommended him several times to family and friends

The whitest beach, tallest trees, longest whale-watching season and so much more - here's our fabulous guide to the stunning wonders of Western Australia

Australia's largest state, now with daily non-stop flights, offers  a mix of nature and coastal experiences, including World Heritage-listed national parks, swimming with dolphins and even the country's whitest beach.

Western Australia truly is a state full of record-breaking wonders - and we're not just talking about wide open spaces in the wide blue yonder. The astonishing statistics start right in the middle of the state's capital city of Perth.

Kings Park and Botanic Gardens, on Mount Eliza, is one of the largest inner-city parks in the world - at more than 988 acres it's larger than New York's Central Park. Showcasing some of the world’s most rare flora, here you will find towering trees, natural bushland, lakes, grand lookouts and sculpted botanical gardens. 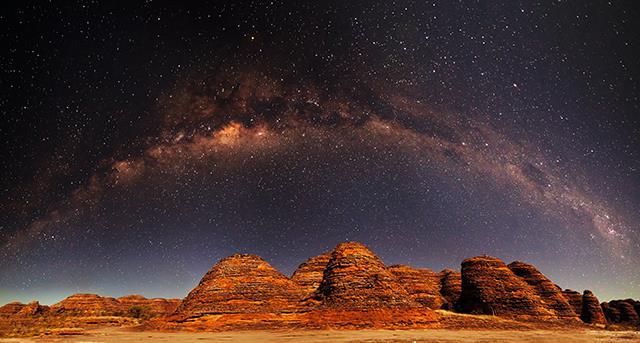 The Bungle Bungle Range in the World Heritage listed Purnululu National Park, in the Kimberley region in the far north of the state, is unique and has been many millions of years in the making. The range is by far the most outstanding example of cone karst in sandstone - this is where quartz sandstone has been eroded over a period of 20-million years into a series of beehive-shaped towers or cones. Flying over or camping in the range is an exhilarating experience.

Now heading for the state's north-west coast, Ningaloo Reef is one of the best places in the world for swimming with the largest fish in the sea, the gentle whale shark which grows up to 52 feet long. Ningaloo is one of very few regions in the world where Whale Sharks gather regularly in coastal waters and are easily accessible to visitors. 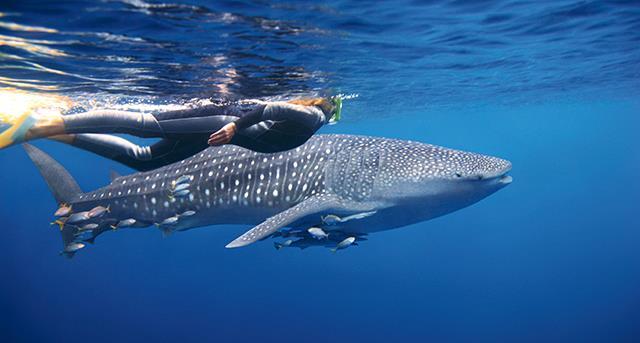 Swimming with a whale shark is an experience to remember, at Ningaloo Reef

On this coast is Monkey Mia, renowned for its amazing wildlife ritual, where dolphins come close to the shore every day to the delight of visitors. It's one of the best and most reliable places for dolphin interaction in the world – the dolphins visit almost daily, not just seasonally, and have been carrying out the ritual for 50 years.

The vibrant port city of Fremantle boasts the world's best-preserved example of a 19th century port streetscape, with its heritage buildings and a fascinating maritime and convict history.  Here you can soak up the laid-back ambience, chill-out in a street café, enjoy fish and chips fresh off the boat at Fishing Boat Harbour; or enjoy a cleansing pale ale at an award-winning micro-brewery. 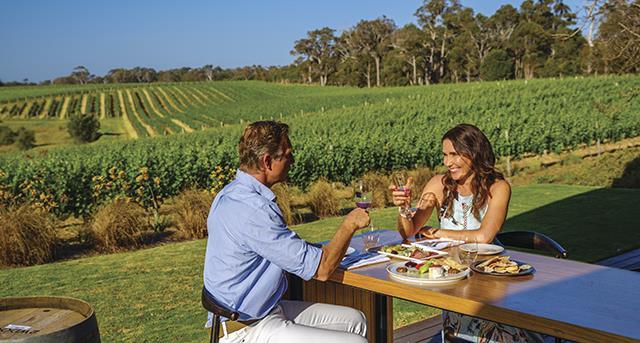 Margaret River Wine Region is the only wine area in Australia where you can experience stunning beaches, tall-timber forests, premium wineries, world-class surfing and caves all in the one place.

The Valley of the Giants Tree Top Walk, 10 minutes north of Walpole on the state's  south coast, is the first walk trail of its kind in the world. At 600-metres long and 40-metres above ground, it has been specially designed to minimise impact on the forest. Walking amongst the tall forest trees is a breathtaking experience.

Near Esperance, also on the south coast, Lucky Bay is Australia’s whitest beach and rated one of Australia’s best, with clear turquoise water and perfect swimming conditions.

The Pinnacles is regarded as one of Australia’s most spectacularly unusual landscapes. You can walk amongst these incredible limestone spires that rise eerily out of the sand, some several metres tall. It’s the only place in Australia like it.

Karijini National Park is home to some of the oldest rock formations in the world, dating back four billion years. It's one of Australia's largest and most stunning national parks, with amazing gorges and waterfalls.

Western Australia has one of the longest whale-watching seasons in the world, running from June until December and stretching the length of its coast. The largest population of Humpback Whales in the world migrate along the pristine waters of the Kimberley coast, using the area as a breeding and calving ground. In many places you can see whales from shore, or join one of the many whale-watching tours. 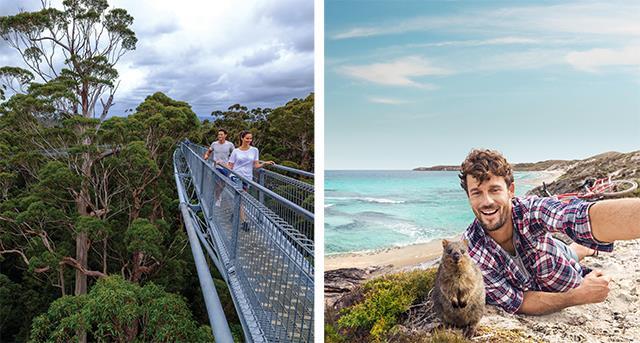 Unique to Rottnest Island, amongst many creatures, is the cute looking Quokka

Rottnest Island boasts some of the finest beaches and bays, as well as unique animal and plant life. A short ferry ride from Perth, Rottnest is a car-free zone and home to the world famous quokka, a marsupial found only in this extraordinary state.