What 160 DialAFlight clients thought of Hanoi

Everything went smoothly. I was blown away by the Banyan Tree which Cody recommended. Thank you so much for organising a wonderful holiday. Now looking forward to my next trip with DialAFlight. You are all amazing!

Excellent customer service from Ewan. Would definitely use again.

Flights easy to organise on phone

Isabelle says the Malaysian Airlines flight was very comfortable with plenty of leg room and more than ample food and drink.

We had seven flights to on our itinerary to Vietnam and Cambodia and DialAFflight did this really well. All the hotels were booked through DialAFlight and were very nice (a special mention for The Iroha Garden hotel in Phnom Penh - absolutely incredible). The holiday was a great success and this was due, in no small degree, to the attention to detail from all your staff. Thanks very much

Everything went very well. Our booking for La Belle Vie Hotel in Hanoi was changed on arrival to the new Hotel Jardin, an excellent 5-star hotel in the same street. I can certainly recommend it.

Thanks to Sam and Neil for arranging and keeping in touch

Incredibly helpful staff. Phone answered quickly. Quick responses to emails. Very clear correspondence and instructions with regards to flights. Will recommend and use in future.

Thank you for all your help. I am new to DialAFlight and would definitely book again. Great experience.

Christian was very helpful, we will use him again.

Oliver looked after us very well and any queries we had were promptly sorted.

This was not the golden age of travel. Our soft-sleeper carriage had basic bedding and no shower – just a shared sink and one Western-style WC. On a table between the bunks was 'breakfast': cheesy crackers, crisps, a yoghurt drink and a tin of mixed kidney-type beans.

But what our train lacked in luxury was more than made up for by the raw experience of seeing Vietnam up close and personal, as the single-track line weaved through city centres and so close to houses and motorists that you could almost reach out and shake hands. 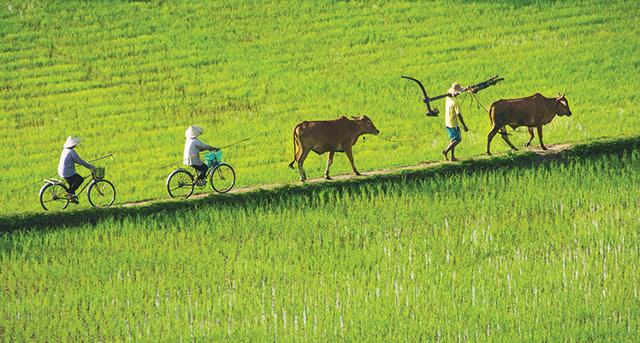 There were 40 of us on our rail tour from Hanoi to Saigon via iconic Halong Bay, then by speedboat up the Mekong Delta into Cambodia. We met as strangers – seven singles, one tour manager and the rest married couples – but friendships were quickly made.

On the way to Hanoi, Vietnam's capital, we passed lush rice fields, the 'hedges' a network of irrigation channels. Water buffalo still plough the land.

Our hotel was minutes from Hoa Lo Prison – the famed 'Hanoi Hilton' (now a museum) that held American prisoners of war in the Seventies, including 2008 presidential candidate John McCain. 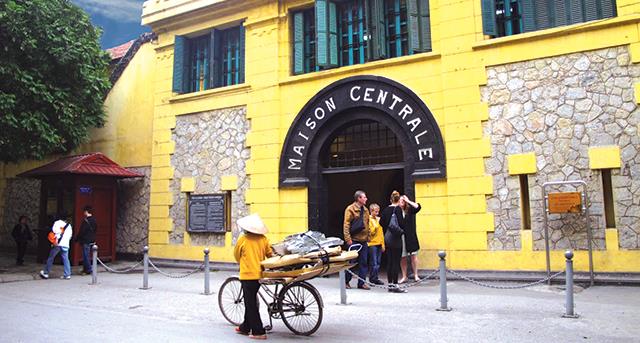 Travelling in traditional tuk-tuks gave us a close-up view of the narrow old city streets, where locals eat, drink and chat on little plastic stools, or have streetside pedicures in plastic washing-up bowls. Then there's the scooters. Vietnam (a little larger than Italy) is home to 88million people and 35million mopeds and scooters.

Crossing the road is not for the faint-hearted. Our guide joked that traffic lights were merely 'a suggestion'. The trick, he said, is to look confident and walk on: the traffic will weave around you. 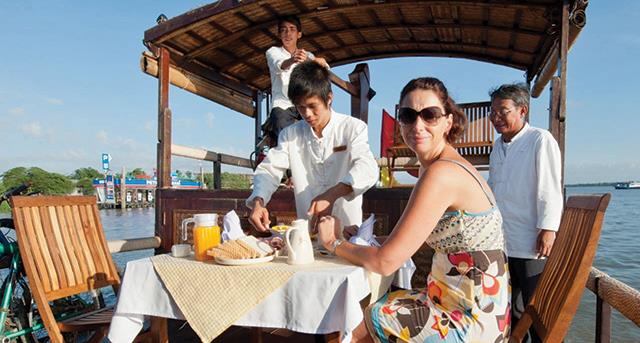 Cruising down the Mekong river

From Hanoi we took a two-day cruise of Halong Bay, with islets of limestone karst pillars rising dramatically from a mist-shrouded sea.

Legend has it the bay was formed when the gods sent dragons to protect Vietnam from invaders. The dragons breathed out jewels, which formed into thousands of islands. Today, it's home to floating fishing villages, rare wildlife and cruise ships.

We visited a floating village, on a sampan rowed by a local girl. Then we boarded the Reunification Railway. You can travel the 1,070 miles from Hanoi to Ho Chi Minh City (Saigon) in 33 hours, but Great Rail Journeys broke it into four days.

We spent one night in a privately run sleeping car aimed at tourists, a notch or two above the regular 'softsleepers'. 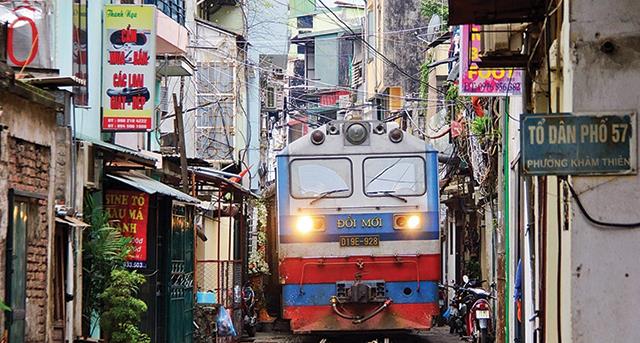 Tight fit: the train inches through the streets

Tip: make sure you secure your door. A Vietnamese woman, seeking a free bed, frightened us in the dead of night when she tried to climb into our vacant top bunk.

But mostly we stayed in hotels along the way, all comfortable with great food. Vietnamese cuisine is one of the healthiest in the world, relying on fresh ingredients and simple flavourings. In the town of Hoi An, my friend Ruth and I went shopping. Ruth had four perfect copies of a favourite dress made in different fabrics, and a young shoe shop girl insisted I hop on the back of her moped – 'Don't worry, I'm a very safe driver' – so I could get another pair of shoes from my hotel while they copied the ones I was wearing.

Our last leg took us into Cambodia along the Mekong river in a speed boat, where we witnessed the harshness of rural life, with stilt shanty houses lacking both running water and electricity.

Elsewhere was evidence of a coming modernity, with the cities leading the way. Even on our train, we got a sense of what might soon be.

My advice is to catch that Reunification Train while you can – before the country changes beyond all recognition. It's charming now, just as it is.