What 345 DialAFlight clients thought of Bali

Always happy with the service - recommended to others

Another great holiday planned through yourselves

Chloe Ward was SO helpful and went the extra mile sending reminders. So impressed with DialAFlight and the staff. Much easier to speak to a real person who listens and has the necessary knowledge. Never again will I waste hours online searching in vain. Recommend 100%

Good service all round.

Thank you Gary and Tammy!

Good service, great communication and planned the journey as we had desired. Thank you Lucy for all of your support.

Ben was incredible throughout! Will definitely be using you guys again

I have used DialAFlight for our holiday needs for several years and have always had excellent service and value for money. Kelly and Rupert are always available and deliver a lovely personal service

We love DialAFlight. Scott and all his team are fantastic

I would not book a 45 minute connection at Doha again. I missed my connection and was then detoured via Dhaka onto Bangkok, adding 10 hours to my journey. Heathrow was a nightmare - took 2.5 hours to check in luggage.

Oli de Bernier is excellent and always looks after us 100%

A big thank you to Cody Phillips who was our Travel Manger. He arranged our holiday and his help and advice was 1st class. I will definitely book another holiday through DialAFlight again.

Jen Hotel in Singapore, the customer service needs to improve. I would not stay there again or for you to recommend this to your other customers

I have already recommended friends and I will use you again. Excellent service

I have used Dialaflight for some years now and wouldn't use anyone else for flight bookings as all the team are superb, especially Luke.

Jim gave us all the information we needed to travel to each area and with all the different covid restrictions that made it stress free. All transfers were seamless and we had no issues with anything. It was the best holiday we ever had so thank you

I have been using DialAFlight for over 20 yrs. I think this speaks for itself

Amazing! I always use DialAFlight when booking long-distance travel. They are the best team in the world, couldn't ask for more. They are brilliant not just at organising good flights and travel plans, but the customer care is second to none. Stuck abroad in lockdown, the staff kept on top of all my flight changes and cancellations, re-organising new flights every time and negotiating with the airline until all was successfully resolved. Thank you for everything, full of gratitude.

I would like to commend Alan and Jay for their fantastic work in getting our flights changed on Singapore Airlines in the nick of time. Cannot thank Alan enough for his rapid action

Lift your spirits in beautiful Bali

From seaside yoga to holy water ceremonies and charming culture - this tropical island makes the spirits soar, as Alice Hart-Davis found out

We had only just set off white-water rafting through the jungle gorges of the Ayung River when our guide began flinging water over us with his paddle.

The water was too calm for his liking – this was his way of livening up the trip.

We retaliated in kind until we were all soaked, but then, just to make sure we were fully drenched, he beached the raft under a pipe ditching a small stream into the river and made us stand beneath it for photographs. They like a giggle in Bali. 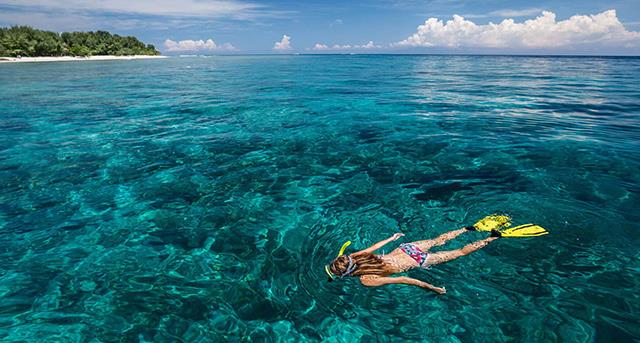 By then, we'd been in and around Bali for a week and had acclimatised to the warmth, the drifting scents of incense sticks, the greeting of everyone with a hands-in-prayer Namaste gesture, and the gaiety of the little temples that peek over the walls of family compounds, their pillars decked out in bright fabrics.

And we were getting hooked on sambal, the tangy, spicy tomato dip that comes with crackers wherever you order drinks. We had also learned that not taking things too seriously is a way of life here, even in the tranquil, opulent surroundings of the Four Seasons at Sayan, set in the jungle just outside Ubud in the middle of Bali. 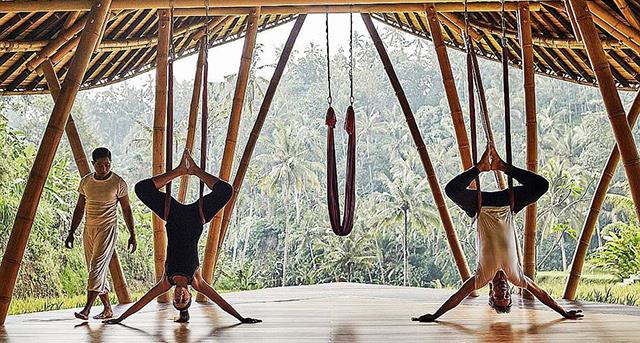 SO MUCH TO LEARN

I thought our cycle tour guide, Agus, was joking when he suggested we stop for a cat-poo coffee. We had been deluging him with questions as we pedalled through open countryside north of Ubud. How many rice crops did this green and fertile island yield each year? Four.

What were the tall, frondy bamboo decorations going up outside every house? Penjors, to celebrate the national festival of Galungan.

The cat-poo-cino turned out to be for real. It's made with coffee beans that have been eaten, and excreted, by a sad, fierce-looking creature called a Luwak, which makes the beans milder in flavour, once they have been washed, roasted and ground. Oh, yes.

A TOUCH OF LUXURY

The Four Seasons at Sayan is an extraordinary building that clings to the steep side of a river valley, like some retro James Bond baddie's lair.

You sashay across a treetop-height walkway towards a large lily pond that appears suspended in mid-air. The hotel is beneath said pond, with a stupendous view across the river valley. The Obamas stayed here last year.

I knew from friends who honeymooned here in style that Bali is not just for backpackers, though even in the luxurious hotels lining the Ayung, the vibe is relaxed. Everyone is friendly and laidback. 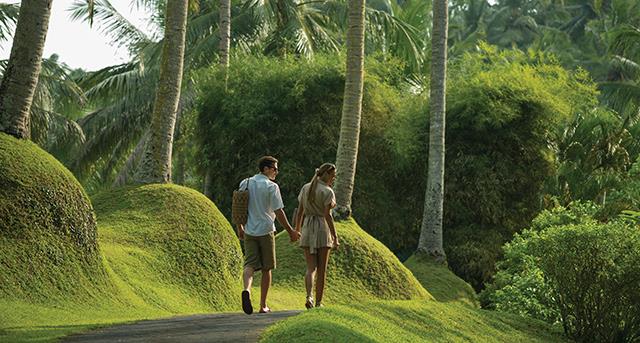 Take a tour of Ubud and take in the beautiful scenery

Most people hang out on the pale-sand beaches at its southern tip. They might get as far inland as the hippyish town of Ubud but, with its yoga centres and art studios.

We started on the beach. Steering clear of Kuta – the Magaluf of Bali – we stayed in the beachy, more upmarket Seminyak district.

Then, in search of an island paradise of the sort that brought the first hippies here in the Sixties, we ventured across the Lombok Strait to the Gili Islands. Gili Gede, off the south coast of Lombok (the next Indonesian island to Bali), boasts the super-chic hotel Kokomo Gili Gede

Back on Bali, my husband Matthew had a massage using milk and honey scrubs at Sayan. Then he agreed to spend our final afternoon enjoying a three-hour 'Blessings of Bali' ceremony. 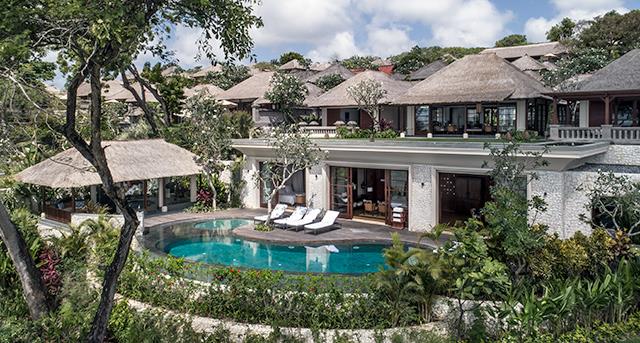 A BIT OF PAMPERING

By now we had moved on to another Four Seasons hotel, at Jimbaran Bay on Bali's southernmost tip, where the blessings take place in the seafront pavilion. We did aerial yoga, we meditated. We 'bathed' in the reverberating din drummed up by the massage ladies on 3ft gongs.

After a muscle-probing massage, we donned sarongs and sat, eyes closed, as the priest chanted prayers – and concluded the ceremony by tipping a litre of blessed water over our heads. It was my turn to giggle – respectfully, of course.