What 22 DialAFlight clients thought of Botswana

The connections worked well and it was so good that if better flight options came up you booked us on to them - I’ll be in touch in April to book our next flights!

Tammy Church should be promoted.

Very much appreciated your help in confirming our flights back to the UK from Botswana as we were without internet .

Marshall is fabulous. Truly epitomises what excellent client service looks like and proactively kept me informed as well as advising on flexible options during the pandemic.

I am so happy to be back and I appreciate all the effort by your staff, Sean in particular. I received all the information about the cancellation of flights on time and my flight back was excellent. Thank you ever so much and keep it up.

Next time, I'll try to have less time between flights. Two long waits at Frankfurt and Joburg made it a very tedious journey. In future I'll ask for alternatives.

Tony did another good job as always

Your service is swift and supportive. Great job

DialAFlight you are stars. My sister was very happy with the 'VIP service.' Simply over the moon!

All went very well and the hotel you booked in Dubai suited us really well.

Belinda Mullet was extremely helpful. Great customer service - have already recommended to others.

Josh and his team always deliver.

BA flight was cancelled which is not your fault. Very happy with your service - thank you very much

Everything went like clockwork. Have used you on several occasions and will be using you again in the future

Thank you for great service at a competitive price.

Yet again all worked perfectly. Thank you

Boris did a super job. Many thanks

Tracking the Big Five through the African bush is an exhilarating experience. Here's our expert guide on where best to find them…

A thrilling safari in the heart of Africa is on the must-do list for many, an essential element being to tick off the Big Five - lion, leopard, buffalo, rhinoceros and elephant.  Grab your binoculars and let our experts guide you to the ultimate safari holiday…

Lion : South Africa
The Shamwari Game Reserve, in the Eastern Cape of South Africa, works with the Born Free Foundation and maintains Big Cat Rescue and Education Centres. It’s the mission of Born Free, founded by actress and conservationist Virginia McKenna and late husband Bill Travers, to ‘Keep Wildlife in the Wild’.

Both Shamwari and Born Free protect big cats and many other species and have rescued animals from all over the world. On Shamwari's morning and evening game drives you'll see lions and the rest of the Big Five. 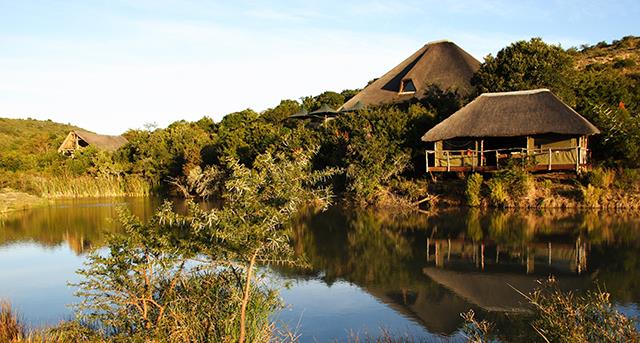 Luxurious lodges can be found at the Shamwari Game Reserve, South Africa

Accommodation is in a choice of individually styled luxury lodges, in glorious settings giving the opportunity to interact with nature in its purest form.

As they're nocturnal and well-camouflaged, leopards are the most elusive of the Big Five and you need an expert guide. At the family-run Okonjima, home of conservation charity The AfriCat Foundation, small groups go in rough-terrain vehicles and stay out for as long as it takes to snap your prey.
Staff use radios to share sightings. What looks like a patch of bare scrub can hide a gloriously languid leopard.

Accommodation is in luxury villas with vast picture windows. Guests can sponsor a leopard and receive updates once home. 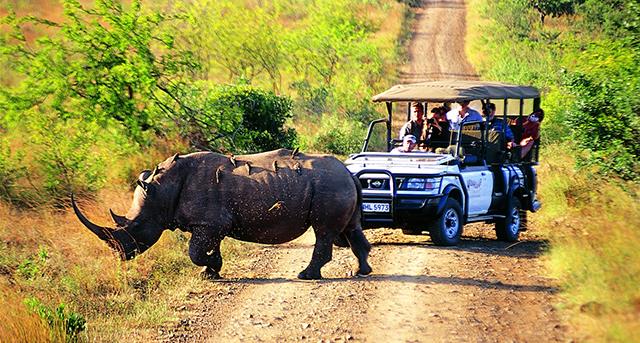 Rhino now inhabit areas where they had been virtually extinct

Rhino : Botswana
Moremi Game Reserve is on the eastern side of the Okavango Delta, where black and white rhinoceros have been introduced under the Botswana Rhino Reintroduction Project. It has seen a zero-tolerance anti-poaching policy result in rhino once again inhabiting areas where they had been virtually extinct. 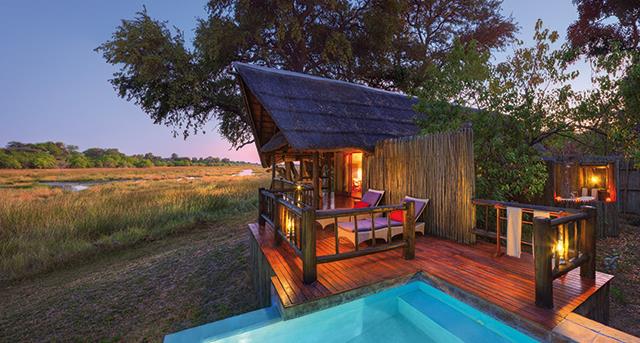 Luxurious accommodation is in Belmond Khwai River Lodge, idyllically set at the forest edge with  views over the floodplains.

Elephant : Kenya
Samburu Intrepids Lodge is a lush oasis on the banks of the great Uaso Nyiro River in Samburu Game Reserve. Elephants love to play in the water and guests have a front-row seat from their room - with several impromptu shows a day.

The tented luxury camp is at the edge of a forest and cooled by the river breeze. It sits on raised decks overlooking the river, where crocodiles also often lounge by the bank. The jagged peak of distant Mount Kenya is in the background.

On Samburu game drives you'll see the other members of the Big Five.

Buffalo : Kenya
The Porini Mara camp is in the Serengeti-Mara wilderness. Dubbed 'the widow-makers', buffaloes are probably the most deadly of the Big Five and reportedly kill 200 people a year.

Guides explain what to do if a buffalo charges: lie flat, face-down, so they can't gore and toss you on their horns. The ones we found were too busy rutting and sparring to charge. But the sense of danger makes it feel all the more real.

Accommodation is in tents, all with hot showers, flushing loos, comfortable beds and living areas with sofas. 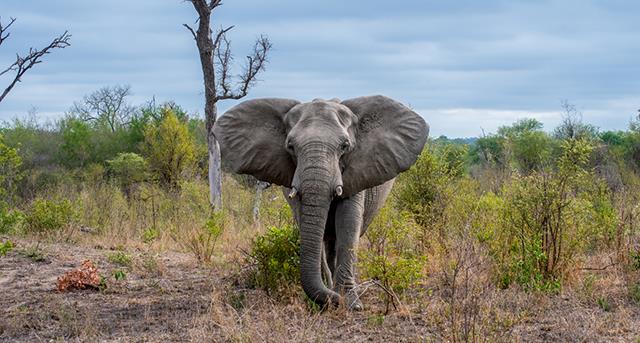 Encounter the mighty elephant in Kenya

Fine-tuning your trip
All of these wonderful safari options are just a starting point for your African holiday adventure, why not add on hotels before and after a safari or include any additional tours or excursions.

The Africa Bush offers many awe inspiring experiences, it is not all about the Big Five. Some reserves are expanding 'walking safaris', where you get close to nature on foot, such as on a mountain gorilla trek.

The great migration, the annual journey of two million wildebeest from the plains of the Serengeti  to the grasslands of the Masai Mara, is an astonishing sight.

And a safari/beach combination is possible, for example, in Kenya or South Africa.

First published in the Mail on Sunday - February 2019