What 190 DialAFlight clients thought of Cuba

Mason was helpful throughout and dealt with problems really well - flight changes and securing a replacement hotel at short notice.

I’m waiting for my suitcase but clearly not your fault

Both Eve and Chris were very helpful and made the arrangements and changes easy for us.

Brilliant customer service from Des and his colleagues.

Monica was very helpful, kind and polite. I can recommend her by her name to all my family and friends.

Will ring for advice re flight cancellation.Thank you so much for a fantastic holiday.

I have already recommended DialAFlight to friends.

I was given amazing customer service and felt very comfortable and confident that I was in good hands. This was my first time booking through DialAFlight and I will definitely be booking again.

If I go to Cuba again next year I will certainly contact you..

I've used DialAFlight for 4 trips now and they've been brilliant on each one.

Flights, transfers and hotels all worked out very well. It was good advice to split the trip between city and beach. We look forward to booking our next adventure with you.

DialAFlight are always great but in particular I'd like to mention Dexter, who has been amazing over several years

Great service and communication as usual! Our family trip to Cuba was a great success. Thanks for sorting the visas. I've recommended you to a friend who wants to watch the cricket world cup in the Caribbean.

Love the fact that someone picks up within seconds when phoning.

Hudson was an excellent adviser and service was brilliant.

Pete was excellent! Instant replies and helped with minor queries while we were away. Brilliant service

Great holiday. Loved the Saratoga in Havana - good connections - and wonderful beach at Varadero. Well done Declan. Virgin were good and on time both ways. Cuban food only basic but we had wonderful weather every day. The people were friendly and fun. Would recommend it

Our recent holiday to Cuba was the first time we have used DialAFlight. Your performance was nothing less than excellent. Every part of our multi stop holiday worked to perfection, which when travelling in Cuba is somewhat of a challenge. I would have no hesitation in recommending DialAFlight to anyone, and indeed will be using your services to arrange our return visit to Cuba next year. Well done Travis

I recommend you to everyone booking a trip!

The old and the new

As Havana opens up to the modern world, this once isolated nation has become the most fascinating of holiday destinations, as Richard Eden discovered

The winds of change have blown strongly in Cuba in recent years, bringing heady days for both the country's creaking authorities and its 11 million inhabitants.

As this sort of modern revolution has ended its isolation from the rest of the western world, Cuba has become one of the most fascinating holiday destinations.

My Spanish wife Montserrat and I were determined to venture first beyond the capital, Havana, to see part of Cuba visited by those adventurous enough to endure a two-and-a-half hour journey, during which vast potholes and wandering chickens are just two hazards.

We were heading for Vinales, a small town in a national park 113 miles west of Havana, known for its limestone mogote hills that look like huge haystacks. 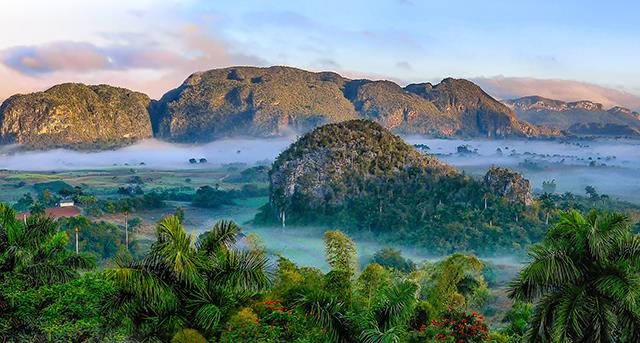 Nothing prepared me for this prehistoric landscape. I half expected a tyrannosaurus rex to come charging round the corner. Luckily, the only giant creature we en-countered was a hutia, a massive rodent so tame it happily nibbled on leaves we offered.

The Vinales region is a twitcher's delight, and we saw hummingbirds, mockingbirds and tiny Cuban todies, with their pink flanks and red throats singing a distinctive, soft call of 'pprreeee-pprreeee'.

We were staying in a red-roofed cabin at the state-owned Los Jazmines hotel. The cabin was made of concrete after its wooden predecessor was destroyed by Hurricane Gustav in 2008.

We were here to celebrate a significant birthday for Montserrat. But as she opened our cabin's curtains the next morning and saw the mist rising from the valley below, becoming 40 seemed a breeze.

We visited one of the tobacco fields that produce the crop for the finest cigars in the world. Winston Churchill favoured the Romeo y Julieta brand. 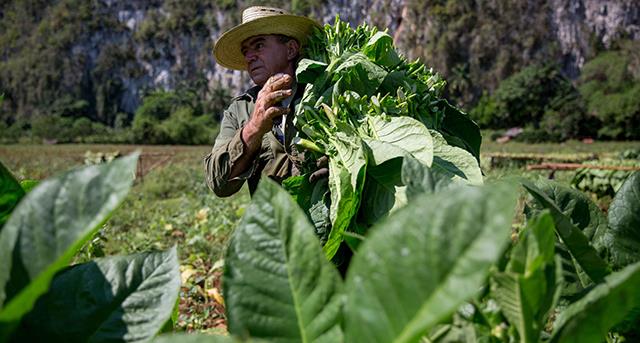 Leading grower Ivan Hernandez talked us through the process and showed us how to roll a perfect puro - not using the apocryphal method involving the thighs of a virgin.

Before President Kennedy imposed a trade embargo on Cuba in 1962, he is said to have asked an aide how long it would take Castro to cave in. 'One year,' the aide replied. 'Well then,' said JFK, 'I want 365 cigars to keep me going.'

Until the revolution, Cuba was a tropical playground for American gangsters. Al Capone had a holiday home in Varadero, which is where we went next – a 12-mile peninsula of sugary sand two hours' drive to the east of Havana.

There, we stayed at the all-inclusive Grand Memories hotel, full of friendly holidaymakers from Canada, which normalised relations with Cuba in the Seventies.

We hopped in a taxi to La Casa de Al, a restaurant in a villa that once belonged to Capone. The waiter made me an offer I couldn't refuse – of paella, Cuban-style. It was indifferent, but, given that this hoodlum hangout was decorated with photos of Capone and his henchmen, I didn't kick up a fuss. 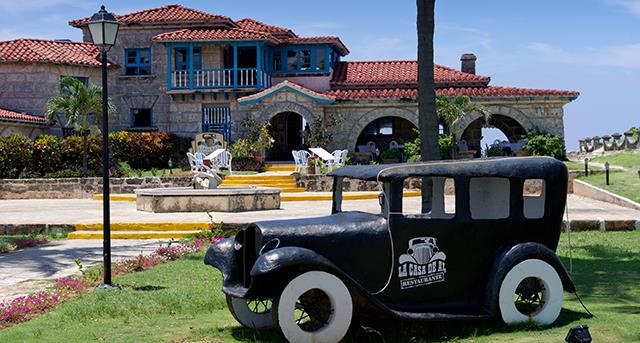 Varadero's beaches are beautiful. We sunbathed, swam and danced to salsa until it was time to move on to Havana.

Hard-drinking novelist Ernest Hemingway became indelibly associated with Cuba. He is said to have sunk 12 mojitos in one hour at the tiny La Bodeguita del Medio bar, but we enjoyed just one or two, to the sounds of a Latin band, before moving on to Hotel Ambos Mundos.

Room 511 has been preserved as an atmospheric museum to the author, who lived there for seven years. It's complete with his typewriter and fishing rods.

For a taxi back to our hotel, what better than one of the 60,000 or so classic American cars that survive from before the embargo? Ours was a 1958 cherry-red Dodge Regent, whose driver, Carlos, was old enough to remember life before the revolution. 'People were so poor in the countryside,' he told us. 'Castro improved their lives.'

For 20 pesos (£14), he took us on an idiosyncratic tour of some of Havana's lesser-known attractions, including John Lennon Park, where an elderly lady is employed to give tourists a pair of metal-rimmed glasses to put on the bronze statue of the late Beatle. The government gave her the job after fans kept pinching the Lennon specs.

While Cuba has become more open, it seems determined not to lose its unique character.

'We're not going to have Cuba filled with McDonald's and Kentucky Fried Chicken,' said our guide earnestly. 'We will never let that happen.'

However, as more and more free-spending Americans visit, the pressure to change could well prove overwhelming. All the more reason to go now.