What 102 DialAFlight clients thought of Naples

All arrangements went well as usual. Hotel lovely. Transfers on time. Looking forward to our next trip.

Ryan and colleagues helped us over 3 years on this frequently rearranged family wedding. Everything went very well. A big thank you.

Huge thanks to Chris and the team. Super service!

Excellent service. Lee sorted out a last minute problem that was caused by us within minutes and was professional throughout. Would highly recommend this company for all your travel needs.

We had an amazing time - all went to plan.

Thanks again Michelle - fab service as ever

All went very smoothly as usual!

Once again an outstanding deal and great location in Naples. Marshal was excellent in finding the perfect hotel 'Palazzo Caracciolo Napoli - MGallery' and we even made time to use the private spa! Shame the service from BA was rubbish as they didn't have enough baggage handlers to give out bags on returning to Heathrow. But none theless the trip was fab!

Harry has been absolutely amazing. We have had to reschedule our holidays multiple times and he has sorted it all out so quickly for us. He responds immediately and is always at the end of the phone. I would never book flights through anybody else. He has been our peace of mind!

Great service, knowledgeable staff, informative and very friendly. All questions about travel answered. When a flight within our booking got cancelled at the eleventh hour it was sorted very quickly

Everything went to plan. I will use your company in the future.

Kennedy and Ellis are a great team

Such a brilliant trip, thank you. Just a teeny complaint to the very cheeky airlines charging me £60 to check my almost cabin size bag in to the hold on return. It’s a con!

Everything worked exactly as you planned. Excellent service, especially by Debbie in Croydon.

Everything was lovely, from the great seats on the plane, to the lovely hotel. Thank you very much

Flights were really excellent and staff onboard were most helpful.

Great trip organised by Roray and his team again! Thanks!

Would like to thank Tristan for recommending the hotel in Seina. We had an amazing time and celebrated our 35th anniversary in style. Thank you again. X

A touch of class, a dash of romance and oodles of spectacular scenery - Adrian Lowery and his bride found it all on the Amalfi Coast, particularly at the luxurious Palazzo Avino hotel

The Bay of Naples and the Amalfi Coast conjure up romantic imagery - panoramic drama, glittering beauty and film-star chic. Jude Law, Gwyneth Paltrow and Matt Damon louchely draped around the crumbling stucco and cobalt waters of Procida and Ischia in The Talented Mr Ripley.

A digital, bus-riding Audrey Hepburn unwrapping her chocolate bar in the picturesque village of Atrani. The Mediterranean backdrop to Sixties paparazzi shots of Richard Burton and Liz Taylor.

It was this sort of thing I had in mind when I suggested we should honeymoon there. A bit of class, a dash of romance and some good restaurants – the perfect destination, we surmised. Well, it pretty much was. 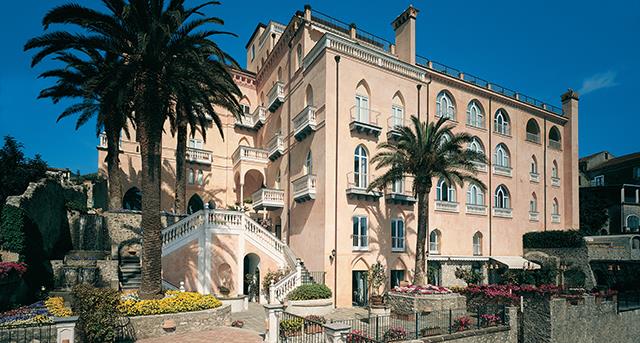 HIGH-END HOTEL
Our first stop was the little town of Ravello, where we arrived well into the evening after an hour’s drive from Naples airport. The entrance, on a narrow street off a tiny piazza high up in the old town, which rambles along a lofty ridge above the Amalfi Coast, is discreet and easily missed.

There are just 43 rooms at Palazzo Avino. The upper landings of the central atrium are balustraded by slender marble columns, which together with the floor’s tilework and white plaster walls give it a Moorish-Andalucian feel.

Rooms are decorated with classic tastes and understated opulence: white paintwork, green and gold furnishing, wooden fixtures and a clean, cool and airy feel. Ours had a honeymoon present – a bottle of sparkling wine on ice. 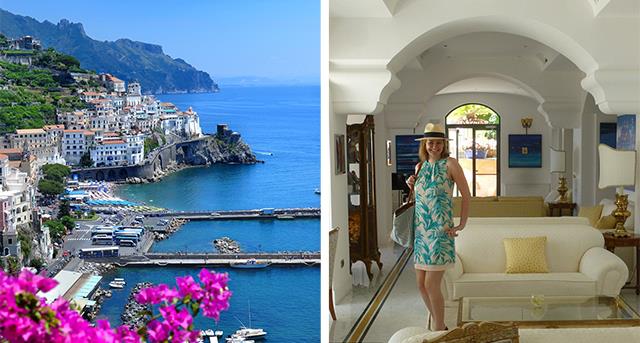 But we had to leave the bubbles in the bucket to catch last orders at the family-run Cumpa' Cosimo restaurant in the town.

The palazzo - mostly 18th century but with some parts dating back to the 12th - is not the only high-end hotel on this stretch of coast, but it must rank as one of the finest and most spectacularly set.

Wisteria-bound terraces spill down the hillside, housing pool, spa, restaurants and bars that look out over the Med and south-eastwards past Maiori to the Gulf of Salerno.

DINING IN STYLE
The loftiest vista is from the rooftop terrace where late in the afternoon our bottle of fizz, freshly chilled, is sent up as a sundowner

One of the two restaurants is the renowned, two-Michelin starred Rossellini’s where executive chef Michele Deleo creates tasting menus that emphasise the catches of local fishermen. Highlights include an exquisite codfish tartare and a larded diamond fish with clam foam.

Together with a Costa D’Amalfi Tramonti white, attended by staff exuding professionalism and charm, it's hard to think of a more exceptional restaurant experience.

The hotel even has a beach.  A fifteen-minute shuttle bus away is the Clubhouse by the Sea, where guests can lounge all day at a series of waterside sunbathing areas.

Ravello is certainly the coolest option to stay in both senses of the word. If you want to be down by the sea, Atrani is a laid-back option. There are peaceful hotels all along the coast, including Hotel Villa San Michele and Sant'Agata sui Due Golfi, atop the Sorrentine Peninsula, from where you can see the Amalfi Coast in one direction and the Bay of Naples and Vesuvius in the other.

For restaurant choices, there are many great value possibilities. There's an exceptional fixed menu at Hotel Villa San Michele. Other good choices include Ristorante Savo in Atrani and Taverna degli Apostoli next to the Duomo in Amalfi.

ADVENTURE FOR TWO
We’d read about the Path of the Gods and decided it had to be done. The trail starts at Bomerano, high in the hills above Amalfi, and progresses south-westwards for about five miles, before finishing high above Positano.

You are rewarded with a bird’s-eye look down on Praiano, and then the clear and well-marked path scratches along the cliffside.