What 78 DialAFlight clients thought of Iceland

William is an excellent travel manager. I had some issues with our original destination and he changed it for me with no problems at all. I’m an anxious traveller and William was very helpful, kind and calming. Will definitely use you for our next adventure.

Great trip and all very efficient

Always there for any worry or query. Thanks again for another wonderfully organised break!

Matthew booked us a fabulous trip. Couldn’t recommend him more. Thanks for arranging everything for us.

As always Jordan came through, excellent airline and hotel.

Only problem was linkage with car hire - off airport and no-one seemed to know where it was. On the return leg, if the car had been checked in at the time stated it would have been far too late to check in for the flight! No real problem though.

In these covid times, trying to travel abroad is quite stressful and frustrating, however Megan was super supportive, really took care to make sure everything went smoothly and was genuinely concerned that we all had a great time. Fantastic service. I would only recommend that you provide a covid package tailored to each individual's circumstances with all the tests and certificates organised going out and back. This service could be provided at an additional cost. I certainly would pay for that.

Kieran was really helpful and gave me the impression that nothing was too much trouble. Excellent service.

The flights were fab and being in First Class was wonderful. Hotel was beautiful and perfectly positioned and the tours you organised on our behalf were brilliant. We got to see the Northern Lights on the deluxe tour you recommended (where others went on shorter tours with different operators on the same night and did not see them). Also the early morning Blue Lagoon was just perfect, we were able to walk straight in and had the place practically to ourselves. When we left the queues were massive.

Great service from start to finish. Thank you. Helped to make a 40th celebration amazing!

Fabulous trip thanks to Carter

Adam went above and beyond to make our trip perfect. This was the third of four trips he has organised for me during the past year and all absolutely faultless

Jenson is fantastic - trip was great with excellent service. I always recommend DialAFlight

As always, a fantastic service from Gino and will definitely be booking again and again! Wonderful trip, great communication

Rocky very friendly, kind and willing to help out with knowledge and advice. This is the second holiday he has sorted for us

Hotel Holt was a great hotel, centrally located, brilliant breakfasts with a comfortable bedroom and friendly bar. Iceland proved to be a living geography lesson, everything you can remember about your geology lessons is Iceland. Would also reconnect Icelandair who have very modern planes and excellent cabin crew

Once again DialAFlight have come out on top with my holiday. Just phone DialAFlight they’ll do the rest. Special thanks to Matthew.

As usual Bradley and his team were brilliant.

The flights were a perfect match to the rest of my trip. A big thank you to Stan for sorting it for me.

Adam at Dial A Flight offered excellent personal service when I booked two trips with them. He always replied promptly to any questions and it was so good to be able to speak to him in person rather than the usual online bookings.Well done!

Hannah was so helpful and competent - everything worked out perfectly

Fab recommendation from chap who booked us last minute, would definitely recommend to others.

Everything was spot on from start to finish. I will highly recommend your services to friends and colleagues. Special mention to Tom for organising everything so professionally

Freddie is a legend

Friendly and efficient. I'll be back

Great planning from DialAFlight plus follow up support. Thoroughly recommend.

DialAFlight never let me down, thanks to Darryll

Light up your life at the top of the world!

The scream is shrill and unexpected. It echoes across the almost empty restaurant, making the waiter jump. I drop a forkful of Arctic char into my lap.

A young woman rushes to the windows, presses her face against the glass and stares into the darknessbeyond.

The Icelandic sky is alive. Ignoring the sub-zero temperatures, we sprint outside and stand in ankle-deep snow watching the emerald bands of the Northern Lights swirl.

A honeymooning couple embrace each other tightly, tears staining their cheeks. ‘This is a dream come true,’ says the new bride. I know what she means.

The spectacle playing out in the skies over Ion - a remote and luxurious hotel deep in the Icelandic wilderness - is a wonder. And it isn’t the only reason to visit this enthralling part of the world. 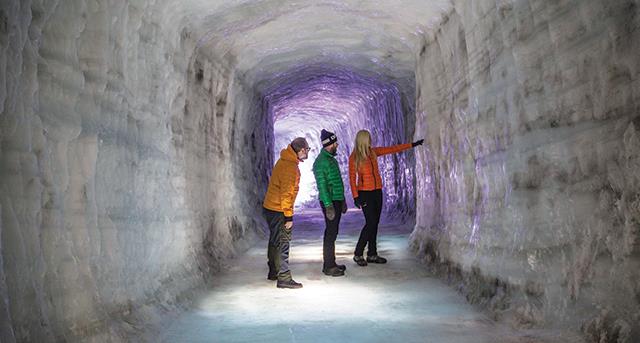 I am on a self-drive along Iceland’s Golden Circle trail, which takes in a number of sights just outside Reykjavik.

Most visitors tick off Iceland’s waterfalls, tectonic plates and spouting geysers on an organised tour - but there’s another way.

After two busy days in the capital - feasting on puffin at cosy restaurant Prir Frakkar and sipping brennivín (a local schnapps made from fermented potatoes) at Boston, Bjork’s favourite bar - the open road beckons.
And they don’t get much more open than Iceland’s Highway 35. It’s possible to do the whole 170-mile Golden Circle circuit in four hours, but what’s the rush?

Poring over a map, I plot my route in the reverse order to the one that the coach tours take. The city fades away, vanishing into the rear view mirror replaced with green valleys and brown mountains.

I pull over beside a farm and the Icelandic horses take a break from grazing to wander over and say hello.

A big draw on the Golden Circle tour is the volcanic crater Kerid, the last stop on the normal coach tour, but the first one doing it the opposite way.
The crater was formed when a large magma chamber collapsed.

The piercing blue colour of the water surrounded by the red lava rocks is a breathtaking contrast of nature. 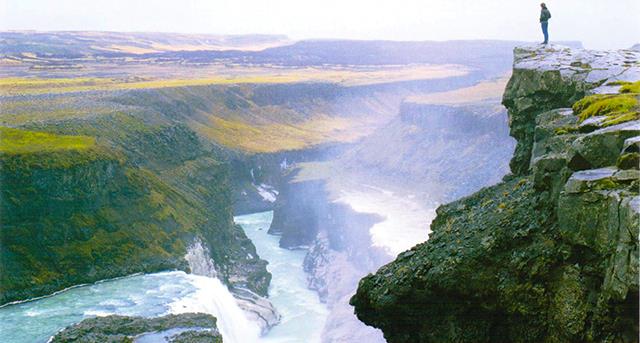 Gullfoss Waterfall, the next destination, is quiet. The day trippers from Reykjavik are yet to arrive, so we take the trail down to the gentle Hvítá River and watch it pick up ferocity as it plummets over the 70ft drop, cascading with a thunderous roar down two levels into a narrow canyon.

A thrilling afternoon follows: criss-crossing the Langjokull glacier on a snowmobile, at high speed - Beyonce and Jay-Z did the same shortly afterwards - and onwards to another of the Golden Circle’s main spots, the Strokkur Geyser.

This is Iceland’s most iconic natural attraction. We smell the geyser long before we see it; a stench of sulphur among the steaming geothermal pools.
A crowd gathers for the next performance, which takes place roughly every ten minutes. 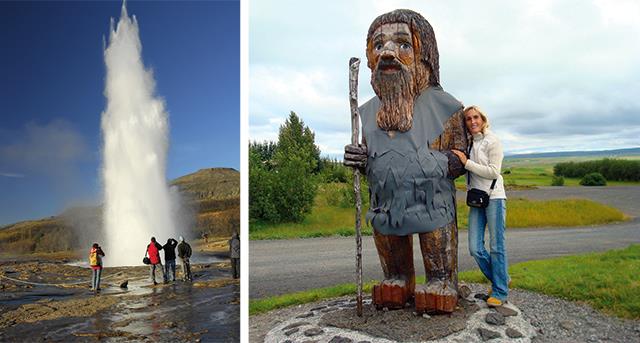 The Strokkur Geyser, and a friendly troll marks the route of the Golden Circle

Eventually, the earth shakes slightly and the piping-hot puddle bubbles before surging skywards 100ft into the air.

With the late afternoon light beginning to soften, we head for Ion Hotel, superbly located near Thingvellir National Park, where the North American and Eurasian tectonic plates collided.

Having met, the plates pulled apart, forming a rift valley on the shores of Iceland’s biggest natural lake, Thingvallavatn. It is a UNESCO World Heritage site and also stood in for Westeros in scenes from Game Of Thrones. The Icelandic Parliament, Althing, was established at Thingvellir in 930, and remained there until 1798.

It is the world’s oldest parliament and the national park (‘the perpetual property of the Icelandic nation, never to be sold or mortgaged’) was established in 1930 to mark the parliament’s 1,000th anniversary.

The Ion hotel, with 45 rooms, has a bizarre industrial-style appearance and has a power plant next door. But don’t be put off, you barely notice it - and inside all is luxury.

The hotel is raised on stilts and decked out with driftwood and exposed concrete, and has the surrounding mountains, lakes and meadows to itself. It describes itself as a luxury adventure hotel and many guests use it as a base for treks across the glacier or for days of fly-fishing in icy rivers. It is a serial winner of awards for design and sustainability.

After our dinner is interrupted by the appearance of the aurora borealis, we get in our bathing suits and out to the plunge pool, where the nocturnal performance shows no sign of a curtain call.

We wallow in the warm waters, sipping cocktails under a night sky heaving with stars and the speckled bands of the aurora.