What 556 DialAFlight clients thought of Mexico

Big thanks to Lily who was excellent

Amazing travel agent, don’t know where I would be without Marie. Her knowledge was outstanding and her experience in travel was off the scale. Her colleague Tristan was great as well.

Amazing service from Natasha. Ever helpful and accommodating in dealing with a number of queries during a very tricky time for international travellers. Had it not been for her sound knowledge and advice we would have surely fallen foul of some of the restrictions due to Covid rules. So much easier to have experts to refer to. Made for stress free travel and can't recommend highly enough.

Alfie was brilliant once again!

Always there to help

Really happy with the flight deal that Nicole found us and everything went super smoothly. Will definitely use you again

Michael was amazing. I always use him and recommend to all my friends

Callum listened to our needs and tailored the package accordingly.

Ian was amazing! Very helpful and always at the end of the phone when we had a query. Been using DialAFlight for years and will definitely continue to do so because of fair pricing and fantastic service.

Always a pleasure to use DialAFlight especially having not travelled for a while due to pandemic and navigating the USA requirements. Helen was brilliant. I will definitely recommend to others.

The travel info and support was great

Lee was great, as always

Aiden was very helpful and I will recommend and come back to you. However I will never fly Air Canada again. They are a nightmare.

Eric has helped make all our recent travel plans and holidays a joy. Thank you so much for all your efforts and excellent customer service from our grateful party of six

Harrison has been fantastic in organising this and several other trips. I keep changing things and he is always patient and positive and sorts things out quickly

Everything went as planned. Bradley and his team were very helpful in answering our questions and gave us the right information at the right time

Callum was so helpful and professional. Fabulous service

On the crest of a Mexican Wave

The Smith family loves nothing more than Mexican food, yet we'd never been to Mexico. So we made a pact to treat our taste-buds to the real deal and head for the Riviera Maya.

After flying to Cancun, we took a 25-minute transfer to the pristine Caribbean coastline and the Grand Velas resort.

Grand Velas is the ultimate balance of sexy paradise retreat and Bond villain's lair. The lengthy driveway goes through dense jungle and everything about it is at once grand yet intimate.

There are high ceilings, big, comfy furniture facing vast jungle on one side and the pools and endless ocean on the other. And it's all-inclusive, with jaw-dropping restaurants and perfectly gluggable local wine. 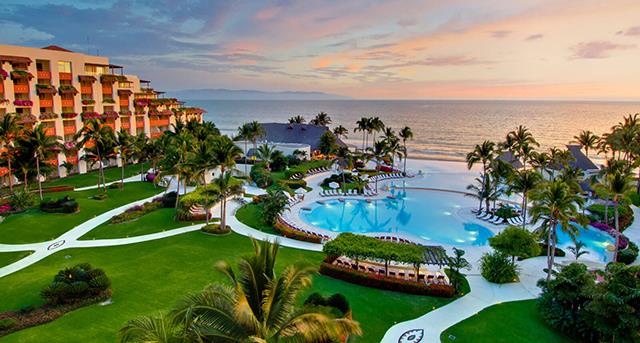 Fabulous setting of The Grand Velas resort on the Caribbean coast

We took a shuttle bus to Luca, a swish Italian restaurant a short ride through the jungle. We were served excellent pizzas and pasta, but with the effects of long-haul finally creeping up on us, we soon meandered back to our family pad.

With the arrival of our first pink and golden dawn, Ruby, nine, discovered the Jacuzzi in our bathroom. Leaving my wife Sophie and Lily, seven, dozing, I opted for a jog along the tranquil beach.

That's when I noticed the resort's sleek jet-skis. Despite being a huge nature fan and one for peace and quiet, I couldn't resist, with the family, tearing it up like a hooligan on a jet-ski through the shimmering spray.

Ruby and I hooted with glee as we belted around after Sophie and Lily across the turquoise Caribbean swell. We recovered at the resort's swim-up bar, where we sank our first blue Hawaiis, pina coladas and fruit smoothies for the girls.

Remember the all-inclusive thing? It encompasses feeding hungry kids as many snacks as they need to keep them powering through the day. And when you head out for dinner at the resort's Sen Lin restaurant, where we gorged that night on beef pad Thai and miso soup, there's no bill to settle.

One morning we got up early to head to the Mayan city of Tulum. The location is breathtaking, the ruins perched above a white sand beach.

The carvings and stone edifices are the hang-out of leathery local iguanas.

These dragon-like reptiles give the whole place a thoroughly intrepid appeal.

Near the entrance, some elderly local gents in colourful Mayan costume amazingly swung and swirled upside-down from an alarmingly tall pole while playing flutes.

At a crumbly pink shack nearby, Juanitos, we encountered wonderful tacos and local sope (a squidgy pancake topped with spicy chicken), washed down with tamarind water.

Marvelling at Mexico's cultural extravaganza, we made our way to Xcaret Park. This theme park has a tantalising focus on wildlife, history and culture alongside a few white-knuckle rides and an astonishing theatrical spectacular. We swam with Maya the dolphin and learned about the importance of conservation. 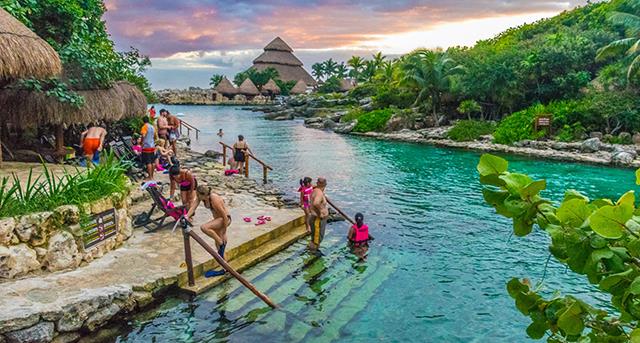 We also spent time with giant turtles and admired the tiny babies from their successful breeding programme, marvelled at the splendid coral reef aquarium, snorkelled with a moray eel and brushed alongside bats.

But the showstopper came at the dinner, at which the entire history of Mexico was re-enacted in a vast state-of-the-art arena that would make the West End's impresarios groan with envy - galloping horses, marching conquistadors and Mariachis dancing and singing as you're served dinner. Epic.

Back at Grand Velas, Ruby and Lily loved the arts and crafts in the kids' club (I'm still wearing the holiday bracelets they kindly wove for me) and I used the gym every day.

Perhaps the most fascinating element of the visit for me was a Gran Jurado tequila-tasting session. The best tequila is made from 100 per cent blue agave and the flavours vary according to how the spirit is aged.

In the grounds themselves you can spot the most incredible wildlife - terrapins, humming-birds and coatis, which are somewhere between a goat and a rabbit. The ecological aspirations of the resort are laudable and the girls planted their very own tree in the grounds, which they named Chichen Itza, after the Mayan temple that thrived from about 750 AD. The girls also adored their cookery class with leading Mexican chef Ricardo de la Vega, learning how to make guacamole with fried Gouda cheese.

The international cuisine of Grand Velas's restaurants is top-notch, but the local cooking really sent our taste-buds surfing on a Mexican wave. Mexican food, as any fan will tell you, is extraordinarily diverse and delicious, and for spice fans like me, the sheer range of the local chilli sauces is like the world's finest wine cellar just waiting to be discovered and detonated into your face.

The final verdict? The best holiday ever, according to Lily - perfect, luxurious and awesome, said Ruby.