Thank you for always trying to help and dealing with all queries promptly. My only problem was I did not get the seat allocation reserved but under the current situation I allowed it to pass ..

Second time I’ve used this company as the quotes are much cheaper in comparison to other companies. I like the fact a customer agent is also assigned from booking stage till departure which provides comfort and peace of mind with any queries. Special thanks to Spencer for his help

Always give an excellent service. I have dealt with Michelle for many years but when she isn’t available all the other staff have been lovely to deal with

I would like to thank Dennis for organising our trip arranging assistance for my mother, aged 96, for our recent trip to Puerta Vallarta. I couldnt fault any of it Flights, hotel overnight in Phoenix and assistance Prior to the flight if I had any queries he was at the end of the phone and we even had updates immediately prior to our holiday. There were 5 of us travelling and we would like to say a huge thank you.

Was a bit concerned about Aero Mexico for a long flight, but the plane was modern and very comfortable - the first flight I've ever taken where the staff came around and offered water while we were actually waiting at the gate. Very happy and smooth transfers too.

The service you provided was stunning. We will definitely use you again.

Jade is my saviour. Always finds perfect flights and bespoke hotels for both personal and business travel. 100% would recommend both DialAFlight and Jade. I have already recommended both to friends.

As always Logan delivered what was requested.

Have already recommended friends and family

Everything was perfect. Thank you for your excellent service.

Excellent and prompt communication. Keep it up

Everything fine. Excellent service. Many thanks

From the Hidden Beach to the truth about tequila, Laura Chubb gives the lowdown on this Pacific paradise

The Marietas Islands have been described as the world’s most idyllic bomb site. As I emerge from crystal water onto the much whispered about ‘Hidden Beach’, I’m inclined to agree.

Here I am, mere miles away from Puerto Vallarta, on Mexico's west coast - but I could not feel further removed from this all-singing holiday resort.

The Islas Marietas, to use their Spanish name, were first formed by volcanic activity and have never been inhabited. Taking advantage of their isolation, in the early 1900s the Mexican government used them to conduct military testing.

A crater bombed into one of the islands has created the pristine Hidden Beach, a secret crescent of sand that you can access only by swimming through a cave. 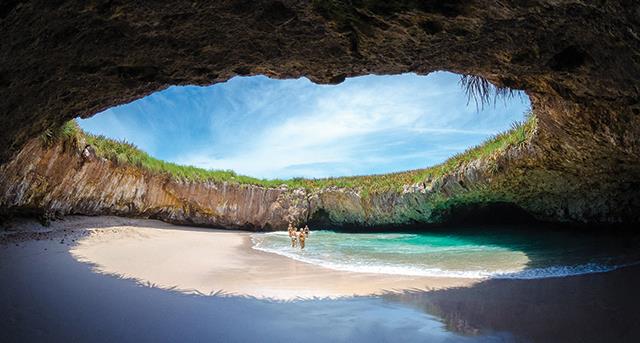 As I breast-stroke through this dark tunnel, my guide tells me to keep my face in the water so the tide does not buoy me up and bash my skull into the rock ceiling. This is not the most relaxing way to start a day of sunbathing.

But I am at peace as soon as I’m out of the cave, with nothing to do except lie on the sand and enjoy the warm ocean waters lapping at my feet. It really is a private paradise. I wouldn’t be surprised if Kim and Kanye made it here during their second honeymoon not so long ago in Punta Mita, an exclusive vacation enclave close by.

The islands were declared a national park in the 1960s, thanks to the efforts of Jacques Cousteau, who found them rich in marine life such as sea turtles, humpback whales and dolphins.

Until recently, Puerto Vallarta, this marvel of Mexico’s Pacific coast, was not easily accessible for British visitors - but now it's just a 12-hour direct flight from the UK.

The town itself is a smart resort long popular with Americans and Canadians, and offers a traditional slice of Mexican life. White-washed houses with terracotta-tiled rooftops are backed by green, palm-packed mountains. Banderas Bay is an arc of golden shoreline, dotted with beachfront hotels. 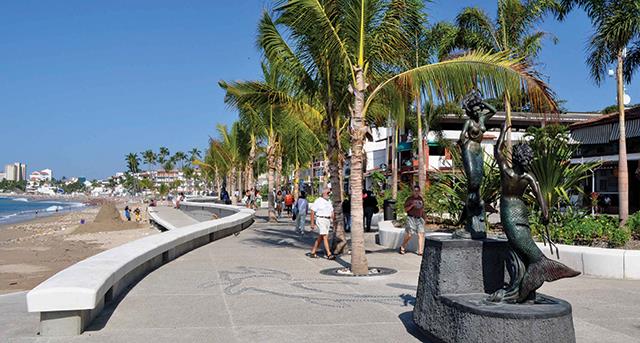 A stroll along the Malecon reveals some remarkable statues

A stroll along the Malecon (seafront promenade), busy with families, takes me past laid-back scenes of everyday life. On Sundays, townspeople dance to traditional music in the main square, Plaza Principal.

I’m staying a ten-minute drive from Downtown at the beachfront Secrets Vallarta Bay, a new resort with an adults-only policy.

The lobby lacks a fourth wall, so you can gaze out onto swaying palms and crashing waves. Rooms are huge and come with deep baths that turn into hot tubs at the flick of a switch.

It's all-inclusive, and premium drinks flow freely. You can eat with abandon at any of the eight restaurants.

There seems to be a wedding by romantic sunset on the beach every night. It all sounds too luxurious to leave, and many don’t, spending their fortnight in the myriad swimming pools and getting pampered in the spa.

But there are tours to be recommended. One is to the Hidden Beach in the Marietas. Another  promises to show me ‘Hidden Mexico’, and I spend the day walking the cobbled streets of quiet, colourful villages and studying petroglyphs - rock engravings left by the Aztatlán.

At the end of the tour, I visit a tequila distillery, and am surprised at the size of the agave – the plant tequila is made from. They look like enormous pine cones. 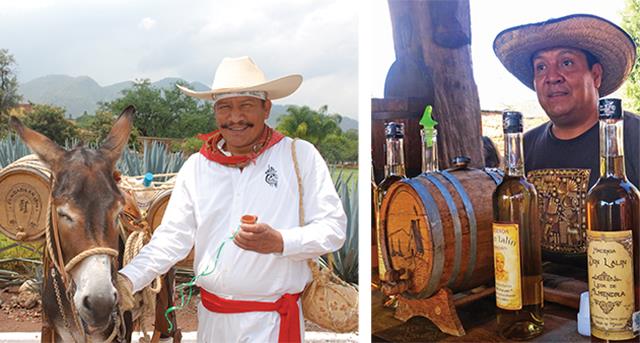 A tequila tasting can be an intoxicating event

Most Mexicans you meet will extol the virtues of their various types of tequila – some are for sipping, others for mixing – and will probably tell you that Jose Cuervo, the golden-coloured brand that stocks the shelves in the UK, is underwhelming.

I also learn that the worm at the bottom of the tequila bottle is fallacy. The ‘worm’ is actually found in mescal – similar to tequila but made from a different type of agave – and is in fact the larva of a moth. Tasty.

Towards the end of my trip, I head north for 45 minutes to Riviera Nayarit, a 200-mile stretch of coastline that caters to a rather upmarket clientele. Think ocean-side golf courses, a Four Seasons, and so on. This is the area where Kim and Kanye stayed.

I want to check out the Riviera’s ‘hippy chic’ town Sayulita - once a sleepy fishing village but now a kind of affluent hipster haven.

I spend the morning surfing and seriously consider converting to a life of beach babedom for the rest of my days. But if posing with beautiful beach bums isn’t your thing, Puerto Vallarta is nearby. Adventure or pure repose is all on hand on this part of the Pacific coast, Mexico's hottest holiday haven.