Sights and sounds of Kolkata 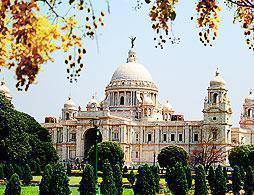 While visiting the great Indian city of Calcutta, today called Kolkata, it is well worth taking this full day sightseeing tour. Your first visit is to the Victoria Memorial, a splendid architectural structure in white marble, modelled on the Taj Mahal. It was built in the early 20th century in memory of Queen Victoria and was formally inaugurated by the Prince of Wales in 1921. The building creates an atmosphere of unforgettable colonial charm.

Then visit the Birla Planetarium, which presents a series of shows on the intricate world of planets, galaxies, solar system, and life cycles of stars. Next stop is at the Howrah Bridge. Popularly known as the Rabindra Setu, this bridge is an engineering marvel and is among the busiest cantilever bridges in the world. Later visit Mother Teresa’s Ashram, formed to help all those people who are sick, poor, needy and have been discarded by society.