Sights and sounds of Chennai 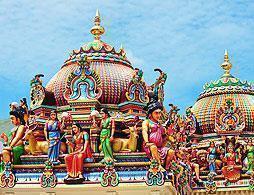 Half Day City Tour of Chennai

FROM CITY TO BEACH

Formerly known as Madras, the city of Chennai is nourished by its rich traditions with classical music, architecture, art and dance forming an indigenous part of the city's identity. Visit Fort St George, which was built in the 17th century and houses St. Mary's Church and a museum. This church is the oldest Anglican Church in India. Then stop at the Kapeeleshwara Temple, dedicated to Lord Shiva.

The Gopuram, or entrance tower, has a profusion of sculptured images depicting stories from Puranic legends. Next, visit the San Thome Cathedral, named after St Thomas, the doubting discipline of Jesus, which is located at the southern tip of Marina Beach and features a beautiful stained glass window at the basilica. Later you drive past Marina Beach which is the second longest beach in the world.